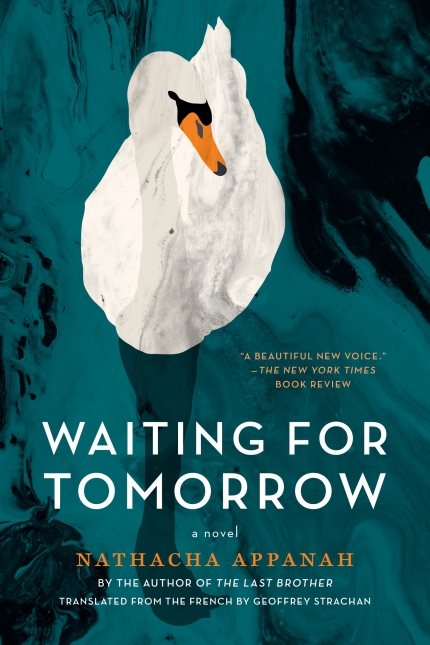 Adèle, the family’s undocumented-immigrant nanny, drowned nearly four-and-a-half years ago. Nathacha Appanah begins Waiting for Tomorrow in the wake of that death, with a narrative that crests over each surviving character, immediately inundating the reader in the situation that has ruined them.

In the opening scene — a prologue of sorts — Anita reflects on the “four years, five months, and thirteen days” since the event. Then, dreaming, Anita’s daughter remembers the same tragedy by forgetting: “In her dream Laura has forgotten that for the past four years, five months, and thirteen days she has been unable either to run or to perform swan dives, or to swim.”

Lastly, Anita’s husband, Adam, reflects on the small window in his prison cell, reciting the same timeline as the others.

Deftly, Appanah sets the scene so the reader knows what’s happened but leaves questions only the full story will reveal: the hows and the whys, and whether readers should feel sympathy or condemnation for these characters.

From here, the novel jumps back in time 20 years, to the New Year’s Eve in Paris when Anita first meets Adam. Appanah chronicles their early days as lovers, then husband and wife, and then mother and father.

Thematically, Waiting for Tomorrow explores the experience of living in France on the fringes of society. Adam isn’t from the city; rather, his roots are in the countryside, and he feels disdain from Parisians. Homesick Anita has come to Paris from the island nation of Mauritius, with her accented French and “a profound longing to be elsewhere.”

Neither feels grounded in the City of Lights, and through this unease, they find each other, start a family, and move to a rural house Adam builds with his own hands. In prophetic and starkly beautiful language, this new French family is revealed:

“The city is far away. The island is far away. Childhood is over. We are in spring, on the Atlantic shore, where the pine forests come to a halt at the foot of the sand dunes. In a little while, Adam and Anita will take a walk along the vast, broad beach that looks as if it were made from the gold of the sunset. In a few weeks’ time their daughter, Laura, will be born. Yes, now, more than ever, it is up to them.”

In the quotidian movement of daily life, Anita discovers she is unfulfilled: a mother who has given up on her dreams. She tells herself this lie: “No, her life is no less honorable than that other one amid the world’s noise, a life of listening, talking, thinking, writing.” Yet, this emptiness grows until her family implodes.

Waiting for Tomorrow explores both the experience of the life of woman-as-artist and the more commonly found man-as-artist trope. Whereas Adam is allowed such writ-large statements as “He is creation itself,” Anita’s growth follows the narrative arc that explores the tensions between motherhood, family, and career. Her novel-in-progress — The Melody of Adèle — is inserted into the main text, allowing readers a close, tactile experience with Anita’s transgressive art.

Divided into three sections, this slim book moves forward in time — except for one chapter in each section that returns to the present day of the prologue — with a final section that moves beyond “Today” and into “Tomorrow.”

Fans of literary fiction and the exploration of the artist will appreciate Waiting for Tomorrow’s attention to language and the way the narrative moves between prologue, incident, and aftermath, gently unraveling the story of Adèle’s death. Geoffrey Strachan’s translation brings Anita and Adam’s story to English readers with vivid descriptions and a seductive voice.

While Waiting for Tomorrow is about the longing for recovery, the novel ends on a bittersweet note, reaching a space where, even if they now have grey in their hair and are forever changed, this family can move forward and begin to count tomorrows again.