After a traumatic childhood, a young woman slowly awakens to friendship and desire. 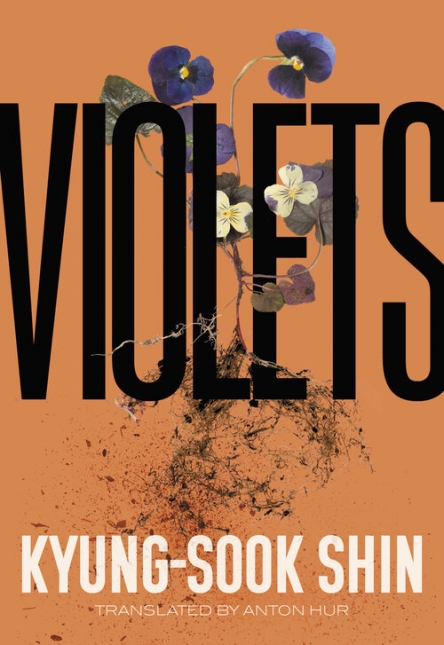 The emigrant’s pride in her departed homeland is a complicated thing, celebratory of its triumphs while critical of its shortcomings. While I am proud of South Korea’s ascendancy in world popular culture, I am deeply ashamed of the primacy the culture affords to men, and the strong backlash against the country’s nascent feminist movement, so intense that the president-elect recently leveraged the issue to win at the polls. Anti-feminism and rigid patriarchal values aren’t a distant concern for me; as a Korean adoptee, they literally shaped my life.

For a country that so relentlessly prizes its males, however, it is women who dominate the literary scene. In particular, author Kyung-sook Shin has gained worldwide recognition as the first woman to win the Man Asian Literary Prize for her novel Please Look After Mom, an international bestseller. Now, the Feminist Press is releasing Anton Hur’s elegiac translation of her novel Violets, published in Korean in 2001.

The phenomenally popular TV show “Squid Game” and movie “Parasite” portray South Korea as an unequal society with a yawning, unbridgeable gap between the haves and the have-nots. Critically acclaimed South Korean women authors like Han Kang, Cho Nam-joo, and Kwon Yeo-sun make clear that this inequality is not just one of capitalism, but is deeply rooted in a patriarchal system that values the myths of bloodline and family honor over, well, actual family. This, too, is the savage, tragic theme of Violets.

One rainy July day, a woman in a South Korean village gives birth:

“An uncelebrated girl. The infant accepts her mother’s closed eyes in lieu of a loving caress, perhaps having intuited her fate from the womb, and does not bother crying…her father gives his daughter’s face only a cursory glance.”

The father soon abandons them both. The humiliated mother, “the first divorced woman in the village,” struggles to survive. Her daughter, San, treasures a friendship with another outsider, until one day they have an intimate encounter, and the friend furiously rejects her in shame.

This incident, as well as her mother’s eventual abandonment of her, breaks San, and she lives in a state of profound alienation, moving to Seoul, drifting into a job at a flower shop after failing to get a word-processing job at a publishing house. She is befriended by her free-spirited colleague, Su-ae, and they move in together. Then, one day, a photographer comes to shoot some flowers for a magazine and does something profoundly disturbing to San: He notices her, taking her picture to liven up a shot of what he considers boring violets.

This small incident sends a tremor through San’s staid world. Later, she runs into the photographer at a café, and he confesses, “I’m not the kind of guy who says things like this but if I’m being honest, do you have any idea how fast my heart was beating when I saw you for the first time with those damn violets?” He grabs her hand and asks, “May I love you?”

Unable to react, San thinks, “Such words can only be said by someone who has never known pain.” Perhaps put off by her enduring silence, the man leaves.

From there, San slides into an unhealthy obsession with the photographer, who has awakened in her the promise and the danger of sexual desire and intimacy that she had blocked off since the incident with her childhood friend. From their brief encounter, she creates a memory that is more suitable to her, replacing the dirty T-shirt she was wearing with a plum-colored silk blouse. In the meantime, she rejects or handles carelessly the offerings of friendship from Su-ae.

After meeting the photographer, “the observing San that had considered every move of the corporeal San had disappeared.” As if she has bitten the forbidden fruit of knowledge, she suddenly becomes aware of the predatory attitudes of men toward women, their boldness in taking what they want whether invited to or not.

She repeatedly visits a construction site, enthralled by the brutality of the excavator and the sexist talk of the workers. She stalks the photographer, plants some violets outside his office, and sees him out with another woman. Finally, she asks him to meet her at a café in his office building…and he doesn’t recognize her.

Like a violet in bloom, the story hangs heavy on a slender stalk. After the abandonment of her father, her childhood friend, and finally her mother, San lives a circumscribed life, more observer than participant. And who can blame her when everywhere there is violence? Her landlord beats his family, her neighbor immolates himself, her peers drink until they vomit and engage in random and not very tender sexual encounters. The novel is rife with descriptions of the street life of San’s neighborhood; her little life is but one detail of the rich tapestry.

A violet is a small flower that can grow anywhere and therefore is considered by some to be a weed. In the English dictionary, San notes that violet comes after violator and violence. Those three words become entwined in her mind, and in the wrenching climactic scene, she seeks to embody them.

With this beautifully translated requiem to the unseen women who live in the shadow of rejection, erasure, and oppression, Kyung-sook Shin brings a powerful indictment of a society that sacrifices its citizens in the name of progress. It is also a sad commentary on South Korea that the novel’s depiction of female marginalization is as urgent and necessary as it was when Violets was originally published two decades ago.