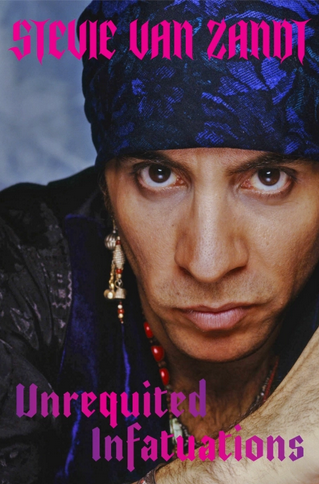 Steven Van Zandt, in trademark bandana in his Little Steven (or Stevie) persona, glowers from the front cover of Unrequited Infatuations; from the rear cover, in his Silvio Dante pompadour, he glares menacingly. Most readers will know Van Zandt from one or both of these incarnations: as guitarist in Bruce Springsteen’s E Street Band or as New Jersey mafioso in “The Sopranos.” Far fewer will know the full story of this prodigious artist that his book sets out to tell.

Unrequited Infatuations traces Van Zandt’s protean musical career through his apprentice work with Southside Johnny and the Asbury Dukes; his meeting Springsteen, “the beginning of a lifelong brotherly love affair” and their seminal partnership; his formation of Little Steven and the Disciples of Soul; his solo career as an artist and songwriter; his work producing not only his own recordings, but also those of other performers; and his creation of an original radio format, Little Steven’s Underground Garage.

The memoir also tracks Van Zandt’s transformation from “Miami Steve, the always-in-a-good-mood party-guy sidekick” into the more serious “Little Steven…the Political Guy,” the “political Rock Artist” most notable for anti-apartheid activism in South Africa. Finally, it documents Van Zandt’s immersion in TV, his seven-year tour-de-force performance as Sil in “The Sopranos,” and his three-year turn as Frankie “the Fixer” Tagliano in the wickedly original “Lilyhammer,” shot and set in a small Norwegian town where Tagliano, an American mobster in witness protection, works hard to launch a criminal enterprise.

“Every album I’ve ever done,” Van Zandt writes, “has a theme and a concept.” The concept of Unrequited Infatuations is that he relishes being “the guy behind the guy. The Underboss. The Consigliere” who “wanted least to be a front man and a star.” It takes shape in two signal conceits: one, the E Street Band represents the rock equivalent of Sinatra’s Rat Pack, with Van Zandt “in the Dino role”; and two, Van Zandt served as consigliere to “Two Bosses [in] two worlds. One fictional, based on reality, and one real, reinforced by fiction,” namely Tony Soprano and Springsteen. As he notes, he used the real “as the emotional basis” for the fictional.

The concept shares space with a hackneyed show-biz theme: Van Zandt the Artist (always capitalized) “could not generate revenue” because his artistic integrity and commitment to his craft were anachronisms once “Pop [became] big business [and] bottom-line corporate control took precedence over the Art.”

Uncompromising and intransigent, Van Zandt enjoyed “good luck with the critics” but not with the masses. As a result, “I had been creating things my whole life that nobody knew about.” His kvetching over this, and his settling scores for stolen “credit,” are the only sour notes in an otherwise amiable book.

The concept and theme converge in the central dramatic conflict: Van Zandt leaves the E Street Band in 1983 after 15 years. The split meant that “I not only lost most of my friends and the respect of several different industries, I blew my chance of living a life without ever again having to worry about money.”

He later admits to having “blown my life twice…First by leaving the E Street Band, and then by treating my solo career as a purely artistic endeavor.” But the former looms as “the big mistake of my life, my very public career suicide from which there was no redemption or salvation.”

In addition to narrating Van Zandt’s professional choices, his “infatuations” requited and not, Unrequited Infatuations also chronicles the history of the Artform of Rock (also always capitalized), a rich one that the author knows intimately. In his take, “the pioneers of the ‘50s invented Rock. The Renaissance acts of the ‘60s elevated it to an Artform,” and “our third generation was the first to inherit Rock as an Artform.”

Dylan’s “Like a Rolling Stone,” says Van Zandt, launched the rock era in 1965, and Kurt Cobain’s suicide ended it in 1994. Despite good work throughout that era, “everything important, essential, and truly original came from the ‘50s and ‘60s,” the latter marking “the peak, the pinnacle, the summit of the Artform.”

Tracing that arc, Van Zandt pays homage to musicians from the 1950s — blues, R&B, rockabilly, and rock ‘n’ roll artists — and demonstrates fealty to rockers from the 1960s, such as the Stones, the Who, and “the trio of guitarists who passed through the Yardbirds,” Clapton, Beck, and Page.

The Beatles and Dylan are the Leonardo and Michelangelo of this Renaissance: the former, whose “Sgt. Pepper’s was the most important concept album of all time,” and the latter, whose opening lines in “Subterranean Homesick Blues” represent “the two most important sentences in the history of Rock.” Van Zandt’s mission has been to preserve and proselytize this Renaissance through his Underground Garage, Wicked Cool Records, and Rock and Roll Forever Foundation.

Despite engaging content and insider perspective, though, Unrequited Infatuations does not fully succeed. Long but thin, the book is so crammed with names, titles, and minor events (requiring a 25-page index) that it can elaborate on only a few. The lockstep chronological organization stalls narrative momentum, and the endless detail muffles dramatic impact.

Principals — including Springsteen, Maureen Van Zandt, and even Van Zandt the protagonist — lack contour and interiority; we know a lot about them without ever knowing them. The one exception, Van Zandt the speaker, achieves interiority, but through his loquacity and distinct voice rather than through introspection.

In essence, Unrequited Infatuations is a book of anecdotes, observations, and opinions. That is both its strength and its weakness. However entertaining, anecdotes are not developed stories; however shrewd, observations are not etched character studies; and however sharp, unjustified opinions are just that: pronouncements often authoritative and insightful, but just as often commonplace and banal. Despite weighty claims of originality from prominent endorsers, moreover, the book is not particularly original, but rather hews to the generic conventions of rock-star/film-star hagiography.

We should keep in mind, though, that the Little Steven persona is a trickster. Considering that fact, and given Van Zandt’s confessed digressions, nonstop hyperbole, and slapdash but stilted prose, Unrequited Infatuations poses an intriguing question: Are we to take the book at face value as a serious autobiography and rock chronicle, or, at least in part, as a put-on, an extended gag?

As Van Zandt says of a similar work: “Who knows? We’re all making up half of this shit anyway.” If a put-on, in other words, it does not play a cheap trick on the reader, but rather shares a belly laugh with the reader.

Whatever the case, Unrequited Infatuations feels like a missed opportunity. Stevie Van Zandt’s eventful life and impressive résumé as a musician and song- and scriptwriter would lead one to expect a more dynamic and thoughtful book, just as his obvious pride in being an artist would lead to expectations of a more artful one. But that is neither to dismiss nor devalue this book. Despite its lapses, Unrequited Infatuations does most of what it sets out to do, and, in Robert De Niro’s memorable phrase, “It is what it is.”