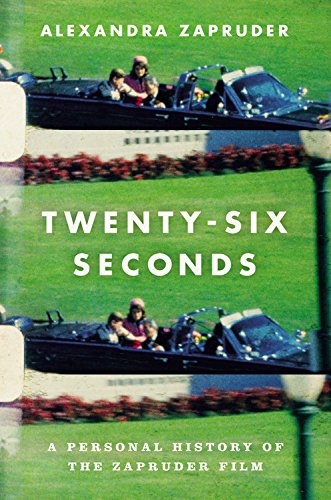 For countless baby boomers, the assassination of John F. Kennedy on November 22, 1963, is etched in their memory. While many of those recollections center on the black-and-white television accounts of that Friday and the long weekend that followed, perhaps the most enduring image is the brief but shocking home movie of the assassination known as the Zapruder film.

On that tragic day, Abraham Zapruder, a Russian immigrant and a small dress manufacturer in Dallas, joined a crowd waiting for the presidential motorcade in Dealey Plaza. An amateur photographer, Zapruder brought along his 8mm Bell & Howell camera, hoping to catch the president and Mrs. Kennedy as they passed. What he captured was 26 seconds of film, culminating in what may be the most horrific movie frame of all time.

The Zapruder film quickly became a sensation as its still images were published by LIFE magazine. Over the next five decades, the film became a touchstone for the assassination and has figured prominently in myriad conspiracy theories. Now Alexandra Zapruder, granddaughter of the late camera buff, tells the story of the film, including how it affected her family.

Twenty-Six Seconds is part history and part memoir. Alexandra is a fine storyteller, introducing us to her grandfather, his blossoming in America, and his love for President Kennedy. The book begins with the chaos that enveloped Abe Zapruder and others in Dallas as the government and public sought to learn what happened that afternoon. Abe becomes a tormented man who happened to be at the right place and the right time; the film becomes his albatross.

The book moves briskly from the early days and weeks of the film’s history toward the various key developments that followed in the decades to come. Included among these benchmarks are the immediate sale of a copy to LIFE, testimony before the Warren Commission, the proliferation of bootleg copies of the film, conspiracy theorists seeking to use the footage to their advantage, further congressional inquiries, and the movie “JFK” by Oliver Stone.

Part of Alexandra Zapruder’s story deals with the legal rights over the film. For years, the family maintained ownership of the original copy but stored it at the National Archives. Although there were other copies available, researchers were interested in viewing the original, and the family, holding the copyright, was inundated with requests for access. Eventually, the U.S. government took legal ownership and paid the family $16 million through arbitration.

Despite all the information presented in Twenty-Six Seconds, the story never lags. The reader gets absorbed in what might happen next and how the family will cope with the demands and criticism from the public. Also noteworthy is how Alexandra explains some of the technical issues, such as film processing and reproduction. She has previously written an award-winning book on the Holocaust, and she has an appealing writing style.

Although the author sometimes appears defensive about decisions made by her grandfather and, later, her father, she is surprisingly evenhanded. In fact, she often goes out of her way to present or try to understand opposing positions. This effort at balance includes interviews with people who were critical of some handling of the financial or copyright issues.

While the focus of the book is on the film, its reception and controversies as well as the family’s role as steward, Alexandra also discusses how popular culture has embraced her grandfather’s work and turned it into an iconic artifact. The film has spawned books, movies, plays, poems, music, and even parodies. Twenty-Six Seconds, which also highlights a changing American society, helps place the footage in a broader context.

She also addresses the role of the media and government and the cynicism that has developed toward both since the assassination. By broadening the discussion, Alexandra Zapruder has written a book which transcends the film and the tragedy in Dallas.

Those who are deeply enmeshed in the details of the Kennedy assassination may be disappointed that she does not discuss the other existing home movies, notably the Orville Nix film, which is only mentioned once in passing. But Alexandra’s intention is to explain the vicissitudes of ownership of this one film, the most important taken that day.

After all this time, it would appear that there is little new information to be presented about the Kennedy assassination save to definitively prove whether Lee Harvey Oswald acted alone. But Alexandra Zapruder has meticulously researched and written about a film, a family, and a tragedy which helps us better understand what happened to America 53 years ago today.

Joseph A. Esposito was an eighth-grader when President Kennedy was assassinated and vividly remembers the events of November 1963. He is working on a book, The Dinner of the Century: President and Mrs. Kennedy Host America’s Greatest Intellectuals, dealing with the dinner for Nobel laureates and others at the White House in 1962.