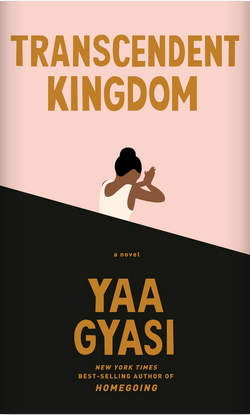 I first read Yaa Gyasi’s debut novel, Homegoing, when I served as a judge for the 2016 National Book Critics’ Circle John Leonard Prize. The candidates that year were uniformly exceptional, but Gyasi’s was a book apart. At the time, I wrote that it was “stunning in its scope and complexity.”

If there was a complaint to be made, it was that we never got to spend enough time with each beautifully drawn character as the book moved chapter by chapter through generations on either side of the Atlantic. Though that struck me as Gyasi’s point — how so much of these people’s humanity was lost to posterity through the barbarism of slavery and its aftermath — it remained that readers longed to spend more time with her pointedly rendered characters.

In her sophomore outing, Transcendent Kingdom, Gyasi has countered that complaint with an intimate first-person narrative that pulls us back into the Ghana-U.S. connection — and so much more — through the lens of a single family.

When the story opens, the narrator, Gifty, is nearing the end of her Ph.D. program in neuroscience at Stanford, and her mother — for the second time — has tumbled into a deep and abiding depression. Gifty and her mother have been a family of two since first Gifty’s father left them to go back to Ghana and, later, her beloved brother, Nana, died of a heroin overdose.

In her lab, Gifty works with mice, searching for the physiological switch that causes “issues with reward seeking, like in depression, where there is too much restraint in seeking pleasure, or drug addiction, where there is not enough.”

She wonders if one day her research will truly help people: “Could it get a brother to set down a needle? Could it get a mother out of bed?” The greater focus of her research, however, is to understand what keeps addicts coming back for more, no matter the risk and pain.

Gifty is an outsider in so many ways: She is a woman in a man’s hard-science world, a Black among suburban whites in Alabama — and then extra-privileged whites at Harvard and Stanford — an American daughter of immigrant parents, and a scientist with a fundamentalist Christian background.

Even in her own family, she understands that she is an outsider. Her parents and brother are from Ghana. Nana was the golden child, beloved by all, the reason his mother sought opportunity for him in America, while Gifty was the unwelcome, burdensome surprise born into the struggling family adrift in a cold new country.

Gifty grows up absorbing this otherness, the drumbeat of her own lower status in her family often drowned out in the cacophony of the subtle and unsubtle racism that bombards them all every day — at work and at school, on the street and on the soccer field, in their all-white Pentecostal parish.

Under that hateful glare, her father tries “to shrink to size, his long, proud back hunched as he walked with my mother through the Walmart, where he was accused of stealing three times in four months.” Eventually, when Gifty is 4, he escapes back to Ghana, his assurances of returning a hollow promise.

Gifty’s response is to do everything she can to be good in a way that will appeal to her deeply religious mother. She reads the Bible cover to cover, memorizing scores of chapters that she can still recite decades later. She tries to radiate with the glow of God’s light.

Nana — six years older, the soccer star, the delight of his father — gives up playing once he realizes his father’s absence is permanent. In junior high, his height and pure athleticism put him on the basketball court. A bad injury and a prescription for OxyContin put him on a path to destruction.

Gifty is only 11 when she ends up alone with her mother, whose brutally long hours of low pay as a home healthcare worker have made her absent, tired, and even more emotionally distant than is her natural inclination.

“I only wanted Nana,” her mother tells her as she descends into depression, “and now I only have you.” For her part, Gifty considers, “I understood and I forgave. I only wanted Nana, too, but I only had my mother.” She also notes, “It’s those who stay who are judged the harshest, simply by virtue of being around to be judged.” This is equally true of Gifty’s view of her mother as it is of her mother’s view of her.

We watch as Gifty draws more tightly into herself, shedding her few friendships as an act of will; moving into the world of facts, clear answers, evidence, and control; and practicing isolation, perhaps as a form of penance. Deep in scientific exploration, she does not know how she feels about the God who, with Nana’s death, abandoned her family but never seems far away.

When her favorite laboratory mouse — an inveterate lever-presser that has developed a limp from the shocks he receives as he desperately chases another hit of Ensure — finally, because of her intervention, refuses to press the lever, it is as though she is witnessing a rebirth, the light of salvation that may course through all of us.

Throughout Transcendent Kingdom, Gyasi tackles a complex web of themes, weaving together a story that inches toward a quiet redemption. Along the way, it is a joy simply to delight in the language she uses in her close observation of life, the quotidian details made fresh:

“Most of the boys I knew growing up were shorter than us girls until about fifteen or sixteen, when they rounded some invisible corner in the summertime and returned to school the next year twice our size, with voices that crackled like car radios being tuned, searching for the right, the clearest, sound.”

She has found that right, clearest sound, and it is transcendent.

Jennifer Bort Yacovissi’s debut novel, Up the Hill to Home, tells the story of four generations of a family in Washington, DC, from the Civil War to the Great Depression. Jenny reviews frequently for the Independent and serves on its board of directors. She also writes a bimonthly column for Late Last Night Books. Her short fiction has appeared in Gargoyle and Pen-in-Hand. Jenny is a member of PEN/America and the National Book Critics’ Circle. Previously, she served as chair of the Washington Writers Conference and as president of the Annapolis chapter of the Maryland Writers’ Association. Stop by Jenny’s website for a collection of her reviews and columns, and follow her on Twitter at @jbyacovissi.