Things I Have Withheld 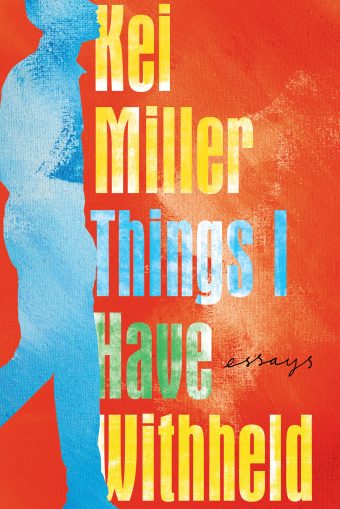 Early in his essay “The Old Black Woman Who Sat in the Corner,” Kei Miller writes about his family. “Maybe that’s all family is — just the handful of stories we never tell.” He goes on to write about one secret his family never told, tracing the language and evasions and admittances and silences his family has applied to the secret over many years. By the end of the essay, he alters his conclusion: “[s]o maybe that’s all family really is — the handful of stories we dare not tell.”

That breathe-and-you’ll-miss-it nuance of the change of the repressive never to the tempting dare is characteristic of the essays in Things I Have Withheld. Miller, a Jamaican poet and novelist, is obsessed with language and its fallibilities. Throughout the collection, no matter the ostensible topic under consideration, Miller returns again and again to how our words, like our bodies, are vessels that often fail us.

“Our feelings are always so much bigger and more complex than language,” he writes. So much of the beautiful tension in Miller’s writing comes from trying to prove that statement wrong.

The essays in Things I Have Withheld cover some of his physical and psychic journeys across the Caribbean, Great Britain, and Africa. They dive into issues of violence toward Black bodies, oppressive gender and class structures, family histories, and who gets to speak for whom in literature and art. But, at least most of the time, Miller’s writing is not focused on a straightforward recitation or even a moral reckoning with these issues.

His arguments and conclusions always lie within the language itself. In the introduction to the collection, he notes that many of us “keep things to ourselves...it is hard to trust them to something so unsafe as words.” Raised within a middle-class Jamaican household, but now living and working as a professor in England, Miller often is trying to understand how the disparate aspects of his life make sense in a body like his.

In each piece, he brings the craft of a poet to his prose, trying to fashion his own personal history and identity into something he can fully embody. Even within a single sentence, the language and perspective shift so deftly that it seems as natural as laugh lines suddenly creasing a previously impassive face. For all his distrust of language, Miller knows its tools and uses syntax, tone, and rhythm to blend Jamaican and British vernacular into a voice entirely his.

In “The Buck, the Bacchanal, and Again, the Body,” Miller writes about a Trinidadian family who claimed that a buck, a supernatural figure said to be “a devious shapeshifter,” terrorized their household around Carnival time. The story takes on a life of its own as Caribbean newspapers and media pick it up and local comedians “interview” the supposedly misunderstood buck. Then the family claims the buck is from Jamaica, which is a surprise since it’s not from Trinidad, where they live, or Guyana, where such tales are said to originate. Miller understands something new about the story then:

“[T]hat ‘Jamaica’ in the buck’s mouth don’t quite mean Jamaica. It does not signify the country, but instead, the body. It is a signifier of blackness, and a kind of badman-ness, and a kind of ruthlessness. I feel a heaviness when I realise this and I understand now that the story of the buck is frivolous but not frivolous at all.”

The buck suddenly becomes both unreal and absolutely real; a confluence that, as Miller points out, characterizes so much of the Caribbean, but also himself — a gay Black man crossing continents, careers, and histories.

There are moments, however, when writing of such interiority creates a disconnect. A closing letter to the spirit of James Baldwin imagines Miller in the bodies of (without explicitly naming them) Ahmaud Arbery, Breonna Taylor, and George Floyd at the moments of their murders. But the second-person perspective in this essay veers uncomfortably into an omniscience that borders on imitation.

For a writer as focused on words and bodies as Miller, it feels off-balance to suddenly hear, in relatively short segments, the voices of these other figures. And although the brutal, racist violence inflicted on them is chillingly recreated, the essay feels rushed and included seemingly to have at least one piece focused on America.

Nonetheless, I doubt I’d be as critical of this single essay if not for the implicit lessons weaved so skillfully through the rest of Miller’s collection. Early in the book, he writes that these essays are “an act of faith,” a reluctant trust not often shared. But Things I Have Withheld is an offering that fulfills that faith to those stories he dared to tell.