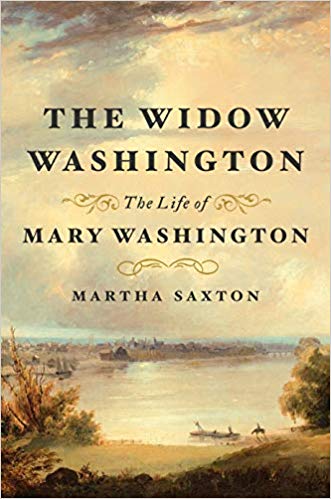 Mary Ball Washington is hardly an obscure figure in American history books, both popular and scholarly, about her famous son, George. But whether authors have lauded or maligned her, they have rarely considered her separately from the son in whose story she typically appears.

Author Martha Saxton’s goal in this biography is thus not to rescue Mary from obscurity, but to “give her the dignity of her independent resistance,” exploring honestly and anew Mary’s entire life as a woman in colonial Virginia.

Earlier, incomplete portrayals stem from Mary’s sparse documentary trail — she left no diary, and few of her letters survive — and authors’ overreliance on George Washington’s papers.

Beginning with the premise that George’s prominence framed only a fraction of Mary’s experience, Saxton leverages her expertise as a scholar of early American and women’s history to expand this evidentiary base and more fully reconstruct Mary’s life. Deeds, wills, and litigation reveal Mary’s family’s concerns, while the meticulous accounting of her close relations and archaeological work from her longtime home, Ferry Farm, reveal the contours of her material world.

Saxton also examines the books Mary collected, read, and quoted from for insight into her inner mind. Where gaps remain, Saxton draws on a broad knowledge of colonial American women to describe what a girl or woman of Mary’s age and status would have experienced; for instance, as a young woman in her sister’s household, and during childbirth.

The more sympathetic, renewed portrait that emerges from Saxton’s reassessment is of “a determined, energetic, anxious woman who loved her children and tried to do her utmost for them,” her efforts wearying but directed toward “securing their prosperity in this world and salvation in the next.”

Saxton’s title, The Widow Washington, highlights the central tension that defines Mary’s life and legacy: between the isolation and vulnerability that attended her status as first an orphan and later a widow, and the family ties she valued. It also implies the degree to which gender structured a story that is not Mary’s alone, but more broadly that of women in colonial Virginia.

Born around 1708, Mary joined a class of Virginia families whose upward mobility rested on the acquisition of land and slaves to work it, but whose status remained tenuous. With both a father and stepfather deceased by the time she turned 6, Mary watched her mother defend property in lawsuits and manage a farm and its laborers.

Those responsibilities reinforced a mode of parenting aimed at developing children’s practical skills and maturity rather than nurturing emotional attachments and refined sensibilities. Her mother died in 1721, and Saxton suggests that so many personal losses left Mary with a “child’s growing store of apprehension about the durability of the adults surrounding her,” and a sense of anxiety about her own security. Nonetheless, those deaths left her as the inheritor of land and slaves, making her relatively advantaged compared to the poor white children who were her contemporaries.

Mary Ball thus brought substantial property and experience to her marriage to Augustine Washington. Besides running a household and educating a stepdaughter and her own children, she assumed Augustine’s duties managing 20-25 slaves and the farm when he was absent on business.

While the family’s wealth made the move to Ferry Farm, near Fredericksburg, possible, Augustine’s death constrained their participation in an expanding British consumer society. His will distributed the bulk of his land and slaves to his eldest sons, leaving their stepmother reliant on two less-valuable parcels to support herself and five children.

Mary’s decision not to remarry ensured she controlled her remaining property to best provide for her children, though it also left her reliant on them in her later years, particularly during the upheaval of the Revolution.

Mary develops in Saxton’s narrative as a practical, competent woman committed to her children’s wellbeing amid the immense challenges of 18th-century Virginia. Why, then, has she so often appeared as a foil to George, a demanding, avaricious, embarrassing presence in his life?

Saxton revisits moments other authors have used to characterize Mary, suggesting that Mary has often been misunderstood because she bridged two very different eras and navigated them as a widow. Choosing not to remarry, she fulfilled roles an absent husband would otherwise have played — for instance, managing enslaved laborers in ways that contrasted with genteel ideas about proper female behavior, and famously rejecting suggestions that George enlist in the British navy.

Her requests for money as her financial independence diminished frustrated her son, who believed he had provided well for his mother, buying her a house in town and renting her slaves and farm equipment to provide her an income. Regardless of those frustrations, Saxton argues that frequent communications, regular visits, and intimate bequests in Mary’s will signal a respectful, loving relationship between mother and son.

Half a mile from where I write this review stands a monument to Mary, an obelisk built in 1894 beside her grave and Meditation Rock. But if local historians and archaeologists reconstructing “reliable views of her life” have “created the foundations of another overdue monument to Mary,” Martha Saxton has built upon that base a remarkably unique structure: an accessible, informative biography of Mary Ball Washington, a woman of colonial Virginia.

Jason R. Sellers is the Colonial American historian in the Department of History and American Studies at the University of Mary Washington. He is currently designing a seminar on Fredericksburg-area history.