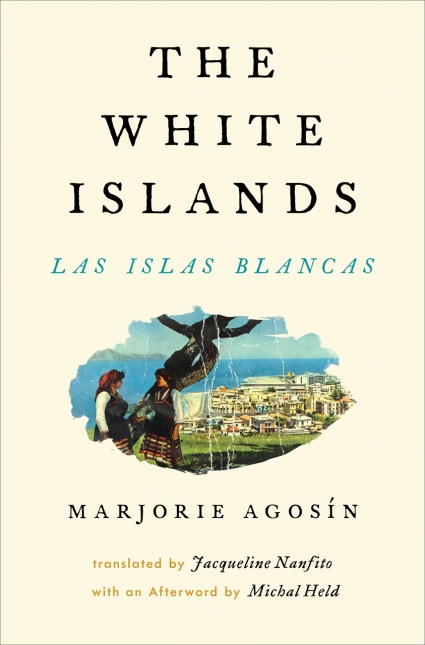 In this heart-wrenching collection, Chilean writer Marjorie Agosín offers a poetic chronicle of Sephardic Jews, a thriving, productive minority that King Ferdinand and Queen Isabella exiled from Spain in 1492, in an effort to unify the country under one religion, Catholicism.

Many of the exiles settled in the islands of the Mediterranean, particularly Rhodes, which they came to call “the little Jerusalem.” The White Islands / Las Islas Blancas evokes the vibrancy of those banished Sephardic communities, especially of the women, who carried their faith, language, and traditions, along with a profound love of life, to their new homes. Rich in metaphor and euphony, this bilingual compilation, beautifully translated from the Spanish by Jacqueline Nanfito, consists of individual lyrical gems, yet reads like one long narrative poem.

The story begins with images of bold women, who set off on a voyage without a clear destination — women like Josefina, “Audacious traveler / Handsomely conflictive grandmother / Who practiced the art of living.”

Once in Rhodes, women like Luna and Estrella nurture a defiant happiness. “They awake singing,” and they sweep the walkways with rose water. For generations, women like these cultivate hope, daring to believe in the future: “So certain was she that she dreamt about Passover, / in her white house on the white islands / It seemed like everything was suspended, even the few clocks / And that the days would arrive just like the jasmine / Filled with a sweetness and fragrance.”

But those hopes are brutally shattered with the advent of World War II: “One day they dragged her from her recently painted house. / She lost the habit of imagining pasts and futures. / They cut the roots of the bougainvillea.”

The poems that follow evoke imminent disaster: “The sea also became dark and writhed.” The Holocaust has come to Greece and is crushing the Sephardic communities with unimaginable brutality. Without providing detailed descriptions, Agosín conjures up images of Nazis forcing the Sephardic Jews of Rhodes into the plaza to be shipped off to death camps — images made all the more horrible by the victims’ beautiful memories of the island’s flowering public squares.

One of the most powerful poems depicts a Greek family enjoying fresh figs and almonds with their friends, while Nazis herd together their Jewish neighbors for deportation: “They say they have taken the Jews from the island / Those who lived there for so many centuries / Your history teacher mentioned it / Who is also there in the plaza…The hair of your history teacher rolls about your door / A bundle of ashes.”

The survivors are tortured by memory. Phantoms of neighbors come to them in the night. A woman recites the names of Jews taken to the plaza. Some escape, and they carry with them “a blooming basket with memories” and “a blossoming language.”

Indeed, the Ladino language, also known as Judeo-Spanish, is one of the bonds that holds these communities together. A form of Old Spanish, Ladino is still spoken in “islands” of Sephardic culture — in the former Ottoman Empire, in Israel, France, Morocco, the United States, and elsewhere. As Michal Held-Delaroza writes in his afterword, you can almost hear the lilt of Ladino in Agosín’s Spanish.

Memory is a foundational theme in Agosín’s writing. The daughter of European Jewish immigrants, Agosín grew up in a German-Chilean community, from which she and her parents fled when Pinochet came to power. The refugee experience permeates her writing. As powerful as the need to flee is the need to remember, to recuperate and keep alive the past. The White Islands is a journey of poetic recovery, a search for a past time that is ever present.

The sea is a constant metaphor in this poetry. The sea, eternal, perpetually throbbing with life, defies time. The voices of the women who populate these poems and the poems themselves are a tribute to “the endless rhythm of the sea’s orchestra.” The sea is “Like a story that is fabricated and then undone.” The tales of the Sephardic women are, like the sea, ever new, ever being reinvented. They unravel only to be rewoven.

Despite the devastation that befell the Sephardim, these pages ring with hope. People continue to fall in love and find pleasure in each other. They re-invent their communities in Salonika, Istanbul, Jerusalem. Some return to the White Islands, where rain washes the world clean: “Everything is blurry and is born again.”

The women who populate Agosín’s pages — Luna (Moon), Estrella (Star), Paloma (Dove), Oro (Gold) — bear names that denote the natural universe, what is universal and immortal. The collection ends as it begins, with the image of women washing the walkways with rosewater.