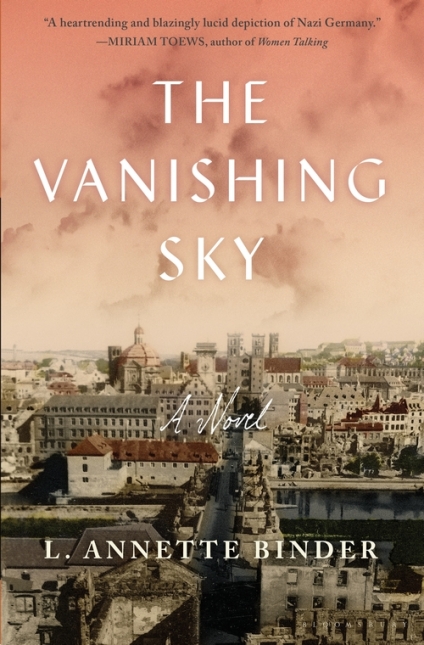 It’s autumn of 1944. In the small town of Heidenfeld, Germany, Etta Huber welcomes her elder son, Max, home from the frontlines of World War II with elation that quickly gives way to anxiety as Max’s mental health deteriorates.

Meanwhile, Etta’s husband, Josef — haunted by an injury that cut his own wartime service short decades ago and ashamed that the creeping loss of his faculties cost him his teaching job and prevents him from fighting for the fatherland now — seems to resent Max more each day.

Miles away, the Hubers’ bookish younger son, Georg — who is even less suited for the physical demands of military life than a typical 15-year-old — falls in love with another boy at the Hitler School and dreams of deserting his post, two crimes punishable by death.

In her debut novel, The Vanishing Sky, drawn from her own family’s experiences during World War II, L. Annette Binder imagines the Hubers’ lives through a difficult winter and ultimately through the destruction of the city of Würzburg in March 1945, a few weeks shy of Germany’s surrender to Allied forces.

The novel alludes to the Nazis’ unspeakable crimes through ubiquitous mentions of military propaganda and anti-Jewish rhetoric; the shame that Max expresses before he lapses into complete catatonia; and the Jewish families’ heirlooms that Etta’s best friend, Ilse, stores in her cellar for “when they come back,” though, privately, each woman knows their neighbors are unlikely to return. Mostly, though, it focuses on the devastation that the war inflicts upon the Hubers themselves, who early on cling to a damaged, ephemeral sense of middle-class normalcy.

Among fellow readers in the United Sates, I am perhaps not unique in that the majority of WWII literature I’ve consumed — at least insofar as stories about the European Theater go — has focused on the horrors of the Holocaust, the triumph of the Allies, or the unusual courage of those who resisted fascism from within Axis-controlled territory.

With the notable exception of Kurt Vonnegut’s Slaughterhouse-Five, I’ve read little about what was endured by ordinary Germans during the war. At a moment when American readers uneasily watch our own leaders stoke ethnic and religious tensions — often to tragic ends — in a way that we have not quite seen before in our lifetimes, the Hubers’ story feels particularly revelatory.

Binder is a deft writer with a gift for choosing vocabulary that elevates the observations of normal people into carefully rendered art. When Georg spies a pair of cadets running away from school, he sees their “heads low and arms pumping like pistons at their sides”; as Etta sizes up the city around her in the moments before it is bombed, she thinks, “Something quivered in the air just then. It was as real as the beat of wings.”

Often, the author focuses on food and appeals to her characters’ skill in gardening, cooking, and foraging in the forests that surround their towns and farms. These details ground the novel in a world rich with tradition — and remind readers that the price of repression and war must be measured in culture as well as in life and limb.

The Vanishing Sky tells a tragic story, but it also serves as a meditation on tragedy and the everyday cruelty by which tragedy is so often begotten. In a pivotal passage from which the book’s title is taken, Etta remembers a developmentally disabled man — the son of a local cleaning woman — who always carried a heavy, leather-bound book with him like a treasure, even though he couldn’t read.

As a child, Etta saw a group of boys throw this book in the river and the man drown trying to retrieve it. Like the other children, she turned away and never spoke of the incident again, although she remembers it whenever errands take her past the riverbank. It’s not clear whether she could have saved the man, but she is haunted by the memory that she didn’t even try.

Some of the book’s most poignant insights into the human capacity for evil come through the scarce passages narrated from Josef’s perspective, which reveal how his childlike desire for respect and belonging contribute to the confused old schoolmaster’s embrace of Nazi ideology — to the great detriment of his family.

Despite its many strengths, The Vanishing Sky ends on a relatively weak note: A scene in which Georg reflects cynically on the Roman poet Horace (Dulce et decorum est…) lacks the originality and emotional punch of the rest of the book, and I found myself skeptical that, when he comes into contact with American soldiers for the first time, a boy with as little confidence in his English skills as Georg would understand their idioms so easily.

Nevertheless, The Vanishing Sky is a moving and worthwhile read, albeit not a happy one. The novel is artfully written, and Binder’s insights into extreme nationalism make it particularly relevant today.

Sarah Schroeder was raised in Nebraska. She lives and works in Washington, DC, and enjoys yoga, coffee, and her small dog friend, Sassafras.

Now Is Not the Time to Panic: A Novel

Teens’ shake-up of their small town has lifelong repercussions.