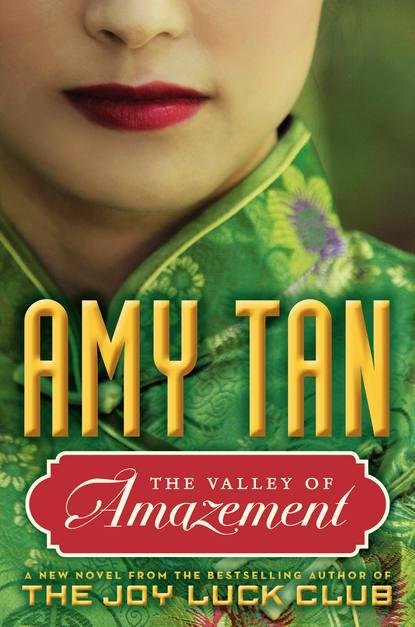 You can practically hear the brass gong resound when you crack open Amy Tan’s The Valley of Amazement, a sweeping epic that spans two continents and three generations of women. Immediately, the reader is ushered into the rarefied world of a “first-class courtesan house” run by Lulu Minturn, an American woman who crosses the Pacific Ocean for the love of a Chinese man. Plausible, perhaps, only the year is 1897, a time when anti-Chinese racism ran high and the mingling of white and yellow in America was extremely rare. This is just one of the many instances where the reader is asked to suspend disbelief, or else willfully ignore history.

Pregnant when she arrives in Shanghai from San Francisco, Lucia (the name she goes by at that time) Minturn hopes that the oldest son of a Chinese foreign minister will marry her. Her lover, Lu Shing, an aspiring artist who copies Western landscapes, has warned that her hopes are impossible, but Lucia is headstrong and believes that love will conquer all. It doesn’t. After Lu Shing steals their second child, the first-born son of the next generation of the Lu family, Lucia eventually falls into the profession of madam. She establishes the first courtesan house in Shanghai to cater to both Chinese and Western men, and has great success facilitating business deals between her native and foreign customers. Meanwhile, she raises the daughter she had with Lu, Violet, also intrepid and impetuous.

Though half-Chinese and living in China, Violet grows up identifying as American, reinforced by her green eyes and brown hair, and her mother’s peculiar profession. As a result of one of the many (many, many!) plot twists, she is kidnapped and sold into another courtesan house just as her mother departs for San Francisco in search of her kidnapped son (why the scion of an illustrious Chinese family would be raised in San Francisco is not made clear).

The bulk of the novel then follows Violet through the years as she trains to be a courtesan, is deflowered by the highest bidder, falls in and out of love with her first patron, falls in love with a married American, has his baby, loses her lover to the Spanish flu, has her child kidnapped by the American’s wife, returns to courtesan life, moves to a tiny village with an abusive Chinese man who lures her into marriage under fraudulent pretexts, and on and on. Crammed in among all these events are Lucia’s story and the story of Violet’s kidnapped daughter, Flora. Phew!

While Tan’s imagination and attention to detail are extremely admirable, one can’t help feeling that her editor was asleep at the wheel. The story is too long, a bildungsroman three times over, and repeats itself in too many details, as in the kidnapping of both mother and daughter’s offspring. Mother, daughter and even granddaughter are basically the same character: plucky, rebellious women brought low by fate but surviving by learning to rely on their own wits. The writing is sometimes sloppy, especially towards the end when the author is wrapping the whole thing up.

Besides a few strong secondary Chinese female characters, the characters are more American than Chinese, including the Chinese male lovers. (Violet’s final husband, Loyalty Fang, kisses her in public while they are waiting for a ship to dock, which for a 1930s traditional Chinese man of an upstanding family is very Hollywood of him.) In an era of great turmoil in China, history is a minor detail, and intrudes upon no one’s life in any appreciable way, except when convenient to the plot.

The novel is at its best when the author delves into the details of courtesan life. The delightful chapter “Etiquette for Beauties of the Boudoir” presents the lessons that Violet’s mentor, Magic Gourd, imparts in the arts of being a courtesan. There, the reader feels as if the author is covering new territory, instead of rehashing tired tales of old China. The euphemisms for sex that Tan comes up with are wonderful: “cracking of the watermelon” and “breaking open for business” for defloration; “little pink lotus” as a description for the anus; “bold knight coming through my gates” and “riding on the stem” for penetration and copulation.

Amy Tan started her career with The Joy Luck Club, groundbreaking for its contemporary Chinese-American female lead characters who took the reader beyond the usual Good Earth plots and characters that constituted most literature about China. The cover for her latest novel is all you need to know about it: a retro photo of half a face and a mandarin-collar silk jacket with frog clasps. The book joins the ranks of sentimental novels that depict a China of jade jewelry, bound feet, opium dens, first-born sons, second wives and concubines, without even the dignity of historical verisimilitude.