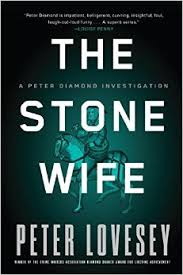 What do a cliché-spouting Korean pop star, a love-struck weapons dealer, a brutally vengeful land developer, a haughty-but-position-hungry professor, and a 700-year-old carving of a large woman on a small horse have in common?

They all figure prominently in Peter Lovesey’s The Stone Wife, the 14th installment of his Peter Diamond Investigation series, a dependably popular set of British crime procedurals that debuted in 1991.

Lovesey is a prolific crime writer with more than 30 novels and short-story collections to his credit; of his several historical and contemporary series, Diamond is his longest running.

Peter Diamond and his stalwart team of detectives are based in Bath, England. The locale offers a nice selection of plot devices, since the city is on a far more intimate scale than London but still world-renowned, cosmopolitan, and steeped in history.

Because each Diamond book stands on its own, a reader new to the series can probably plug in anywhere along the way, though the central characters collect backstory as the series progresses.

All the standard types are here: the gruff and damaged team leader (is there no other way to lend gravitas to all these world-weary cops than to have their loved ones die brutally?); the steady second in command; the ambitious token woman; the irritating know-it-all; the naïve newbie struggling to find his place on the team; and the bureaucratic and political pest of a chief. While not cardboard, none of them are fully realized characters.

The most enjoyable element of a Diamond investigation is not necessarily discovering whodunit — because, frankly, the investigative components are not all that satisfying — but learning which arcane subject we will plunge into during the course of solving the mystery.

In installment 13, The Tooth Tattoo, it was the inner workings of a classical music quartet. Here, the subject is Chaucer scholarship. The stone wife of the title refers to Chaucer’s Wife of Bath, a bit of a local, if aged, celebrity.

In this story, she is carved astride her horse into a hefty block of stone. The coveting of the stone carving, which has a provenance that not only makes it a contemporary of Chaucer’s, but hints that it may have graced a house in which he once lived, drives the action of the story.

If that sounds just a tad too dry, Lovesey does keep the action bouncing along. The murder occurs just a few pages in, at the height of a hard-fought auction of the stone, which is interrupted by its attempted heist.

The victim is a Chaucer scholar obsessed with possessing this particular Wife of Bath. He’s so horrified that someone is trying to make off with her that he charges at the thieves, and one of them shoots him.

The story is peppered with an interesting cast of witnesses and suspects, and includes a dicey undercover stint for Ingeborg, the team’s blonde former investigative journalist who taps her old contacts to get close to the suspected supplier of the murder weapon. She does so by approaching the young Korean pop star under the guise of a journalist wanting to do a day-in-the-life profile of her and her bankrolling sugar daddy, the weapons dealer.

One fascinating point of cultural division: For an American reader, it’s hard to comprehend the team’s single-mindedness in attempting to track down the supplier of the murder weapon, a 50-year-old revolver, or the fact that apparently there is really only one person worth considering as its source. Even more incomprehensible is that the dealer is less a gun seller than a gun renter; guns are so scarce and valuable that criminals return them after use. It seems almost quaint by U.S. standards.

I’ll admit that I’ve only read a few of the later Diamond books, but I wonder if the series isn’t suffering from its longevity. If all the superfluous detective work in The Stone Wife were removed, we’d be left with a not-very-compelling short story.

Lovesey fails to sell several plot points, one late in the story involving the weapons dealer that is so inorganic and unresolved that it almost feels as though the author must be planning to carry it forward into installment 15, except that the stories don’t intertwine that way.

Finally, the willingness of Lovesey’s perpetrators to confess, and the speed with which they do so — of course, over the objections of their solicitor — is worthy of nothing so much as a “CSI: Miami” episode.

Perhaps that’s what these books are: the literary equivalent of an “NCIS” or “Bones” season finale. Both are entertaining and easy to digest, but it’s best not to think about them too hard or ask too many questions.

An Egyptian journalist with a newborn baby commutes between Cairo and Baghdad during the turbulent 1970s.