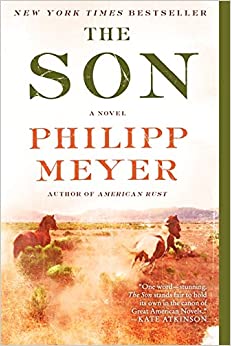 Philipp Meyer’s The Son is one of those books that remind you how totally absorbing a novel can be. Tracking the fortunes of the quasi-mythical McCulloch family, Meyer explores a swath of Southwest history that extends from the settlement of Texas in the 1830s, through the Comanche conflict, range wars, rise and fall of the cattle empire, oil boom and on into the present. Readers of Larry McMurtry, Cormac McCarthy, and even Edna Ferber will be familiar with much of this terrain, but the saga that unfolds in The Son is unfailingly engaging and profoundly resonant.

I had a moment’s trepidation when I opened the book and read the table of contents: three separate narratives in three separate time frames for nearly 600 pages? Swapping voices every chapter like tag-team wrestlers? Okay, I was dubious.

Often in novels with multiple narratives, the voices become muddled and indistinct, and the constant interruption and resumption bleeds away tension. But 12 pages into The Son, it was clear this was the work of an uncommonly visionary and skillful writer with a superb sense of pacing.

The first of the three narratives opens with the 1934 WPA oral history of the 100-year-old patriarch, Eli McCulloch, Meyer’s fictional character, who shares considerable background with one Benjamin McCulloch, a true-life Ranger, Indian fighter and pal of Davy Crockett, who had to sit out the battle of the Alamo when he came down with measles. But unlike Benjamin, Eli survives the perilous adventures of his youth and the Civil War, returns to Texas and starts acquiring land on the Nogadoches River.

The second narrative, set in the present day, is the tale of Eli’s great-granddaughter, Jeanne Anne. Anxious to be part of the family business but unable to find a place among the men, Jeanne Anne inherits the huge McCulloch fortune at the age of 17. At this point the tabloids take note and dub her “the millionaire teenager.”

The third narrative in the troika is provided by the journals of Eli’s son, Peter. In the early 20th century, Peter becomes party to the massacre of the Garcia family, neighboring ranchers who may or may not have rustled McCulloch cattle. Unfortunately for him, Peter seems the only man in the McCulloch clan with a conscience, and the event begins to devour him.

In the novel’s first 20 pages Meyer sets off at a blazing pace. In 1832, the 12-year-old Eli’s homesteader family is under attack by the Comanche:

“I got my rifle and sat down in a corner facing the door. The room was all shadows and dim red light. I wondered if I would go to Hell. My brother was pacing back and forth, and my mother and sister had sat down on the bed. My mother was brushing my sister’s hair saying Shush now, Lizzie, everything will be fine. Their eyes were empty sockets like the buzzards had already found them.”

The Comanche kill the entire family save for Eli, who is tied, naked, to a horse and borne off to the Texas outback in the most harrowing kidnap sequence I’ve ever read.

In the present day, Eli’s aged great-granddaughter lies mortally wounded on the dining room floor of the McCulloch ranch, trying to reconstruct the events that brought her to this end:

“Even as a child she’d been mostly alone. Her family had owned the town. People made no sense to her. Men, with whom she had everything in common, did not want her around. Women, with whom she had nothing in common, smiled too much, laughed too loud and mostly reminded her of small dogs, their lives lost in interior decorating, other people’s outfits and proper seating at parties. There had never been a place for a person like her.”

With these two stories in motion, the frame shifts to 1918, when Peter’s son, Glen, is wounded by Mexican cattle thieves and the McCullochs stage a murderous reprisal:

“Our youngest son, Glen, was shot tonight when we came across some riders in the dark … The Colonel [Eli] has decided the shooters were our neighbors. When I protested it was too dark for any of us to have seen the guilty parties, it was implied that I was a traitor.
‘If you’d learned anything I taught you,’ he said. ‘That was Chico and Jose on those horses.’
‘Well, you must have eyes like a catamount,’ I said, ‘to be able to see in the dark past a furlong.’
‘As you well know,” he said, “my vision has always carried farther than that of other men.’
About a quarter of the town (the white quarter) is downstairs, along with the Rangers and all our vaqueros. In a few minutes we will ride on the Garcias.”

The Son is a beautiful, violent and frequently heartbreaking book, but it is not without a sense of fun; along the way, we meet LBJ in senatorial campaign mode and have tea with Edna Ferber at the McCulloch ranch. We also meet an Indian fighter by the name of “Syphilis Poe.”

Meyer’s Southwest landscape is always fresh and alive on the page, and he is so fluent in the archaic language his characters speak that their dialogue bursts into life like some priceless archival recording. Readers are lucky:  they can buy this wonderful novel at any bookstore.

Fred Haefele’s writings have appeared in Epoch, Missouri Review, Prism International, Outside, New York Times Magazine, Salon.com, Wired, Montana Quarterly, Newsday, American Heritage and others. He is the author of the award-winning memoir Rebuilding the Indian and the recently published Extremeophilia. Visit his website at fredhaefele.com.

The Secrets of Flight: A Novel