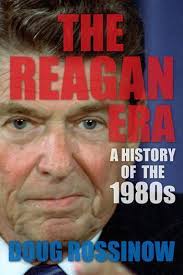 "In 1984, I turned eighteen and voted for Ronald Reagan," Doug Rossinow writes at the opening of The Reagan Era: A History of the 1980s. "Reagan affirmed values that attracted me: unqualified patriotism, national strength, and individual empowerment."

Just a year younger than Rossinow, I was too young to vote in the 1984 election, although I certainly wouldn't have voted for Reagan. But my father did, just as he had four years earlier, for pretty much the same reasons as the young Rossinow. After the turbulent and often violent upheavals of the sixties and the long hangover of the seventies, Reagan offered the nation an enticing vision of renewed American pride, strong and unapologetic. The prospect of "Morning Again in America" had widespread appeal.

Reagan occupied the White House for the whole of my teenage years, looming over a decade in a way no president had since FDR. Since then, he has acquired an almost mythological status.

For many conservatives, Reagan is a kind of founding saint, his hallowed name evoked reflexively and fervently. For liberals, it's much the opposite, with Reagan's 1980 election representing the moment when the nation took a wrong turn into the dark woods of jingoistic militarism, corporate deregulation, and widening economic disparity.

Reagan — a former Hollywood screen star — was an unusually charismatic politician, supremely skilled at honing his public image for maximum emotional impact. Indeed, Rossinow observes that, during his 1980 campaign, Reagan changed the timbre of his voice as he underwent an actor's transformation, ditching the clipped, tough-guy staccato he'd cultivated as the no-nonsense governor of California for the warm, husky inflections suited to his new persona as a sentimental patriarch dispensing commonsense wisdom. Reagan's facility as the Great Communicator played a powerful role in determining how we remember him even today.

In spite of his youthful ballot choice, Rossinow, a professor of history at Metropolitan State University in St. Paul, probably falls along the liberal side of the spectrum, but he does his best to keep his own politics at bay. Indeed, his stated intent is to set aside the legend and "conduct a sober evaluation of Reagan…that is critical but reasoned, fact-based, and not merely partisan."

On the whole, he achieves this goal, largely by sticking to the sequence of events and developments with a minimum of punditry, and by keeping a tight rein on his subject matter. Although The Reagan Era makes interesting detours into the cultural developments of the eighties (Wall Street, crack, racial strife, AIDS, yuppies, pop music, televangelists), these social trends are always viewed through the lens of the central subject.

Rossinow is a disciplined writer. Although the book runs a mere 297 pages (excluding notes), it is breathtakingly comprehensive, a sweeping tour through nearly every major development of Reagan's eight-year tenure, concluding with the early years of his successor, George H.W. Bush, whose administration was widely perceived as an extension of Reagan's, albeit with a far less charismatic leader.

Although Rossinow's breakneck pace through the decade can feel dizzying, his straightforward prose lends itself to untangling complex events. This is particularly evident in the large section he devotes to the Iran Contra Affair, a hot mess of secret cabals, international subterfuge, and multiplying objectives.

The essential plan? To raise military funding for the Contras in Nicaragua (forbidden expressly by the Boland amendments) as a kind of byproduct of a complex deal involving selling arms — partly with Israel as a middleman — to Iran (then at war with Iraq) in exchange for negotiating the release of American hostages held in Lebanon by Islamic militants.

Although it strains plausibility to believe that Reagan, working in secret with certain cabinet members, was anything less than the ultimate architect of this misadventure, his legal culpability hinged on whether he had clear knowledge of the plan. (Reagan had long been obsessed with aiding the Contras, comparing them to America’s Founding Fathers.) In his shifting testimony, he had to choose between appearing criminal or incompetent. To avoid prosecution, he chose the latter.

Reagan's miraculous escape from the disgrace of indictment or impeachment left his legacy tarnished but intact and, today, he is often more remembered for his major accomplishment, the nuclear summits which anticipated the end of the Cold War and, indirectly, the collapse of the Soviet Union.

In Rossinow's telling, Gorbachev was the prime mover of these events, risking much at home and far more willing than Reagan to compromise (it’s unclear whether Reagan was a shrewd negotiator or merely stubborn). Still, it's unlikely that anyone but a fierce anti-communist like Reagan would've had the credibility to sit down at the table to begin with.

For those of us who lived through the era, Rossinow's wealth of detail can have the startling effect of bringing you viscerally back to a time when these events churned out the daily headlines. (I had forgotten, for example, what it was to live under the oppressive threat of nuclear war in a time when defense hawks like Eugene Rostow and Caspar Weinberger still considered limited use of these abhorrent weapons plausible.)

For newer generations, more familiar with rhetorical shorthand than factual events, The Reagan Era is likely to be something of an eye-opener: History's tapestry of cause-and-effect is always more complex than you've been led to believe. In either case, Rossinow's succinct and well-researched account of an influential decade is an invaluable resource for any student of modern American history and current affairs.

Tyler C. Gore, a native New Yorker, lives in Brooklyn and has taught at Brooklyn College, Hunter College, and for the Gotham Writers Workshop. His fiction, reviews, and essays have appeared in many journals, and he has been listed several times as a Notable Essayist by The Best American Essays annual anthology. He is the recipient of a Fulbright Scholarship for creative writing and currently serves as editor and art director of Literal Latte, an online literary journal based in New York City.

My Southern Journey: True Stories from the Heart of the South

The author wanders through his mental library to better define a disappearing Dixie.

Opening Wednesday at a Theater or Drive-In Near You: The Shadow Cinema of the American ‘70s