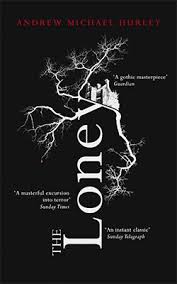 Plot, character, and setting are the three main components of a novel, but sometimes the setting can also be a character, especially in Gothic novels. Think of the creepy Transylvanian castle in Bram Stoker’s Dracula, the wild Yorkshire moors of Emily Brontë’s Wuthering Heights, or the snowbound Overlook Hotel in Stephen King’s The Shining.

The setting in Andrew Michael Hurley’s Gothic horror novel, The Loney, is so important that the book bears its name. The Loney is “a dangerous place. A wild and useless length of English coastline. A dead mouth of a bay that filled and emptied twice a day and made Coldbarrow — a desolate spit of land a mile off the coast — into an island.” The Loney devours people with its treacherous tides, leaving skeletons in its wake.

It is to that forbidding place that the Smith family goes one fateful Easter week with a small group from their Catholic parish in London. This Holy Week pilgrimage had been their tradition for several years, until a 1973 trip, when Father Wilfred, their priest, went out one evening to look at the sea and came back “changed in a way that no one could quite explain or understand.” They never returned to the Loney with Father Wilfred, who three years later dies under questionable circumstances.

It is not only for penitence and prayer that the Smiths go to the Loney. Mrs. Smith, a native of the area, believes that the waters of a local shrine will heal her older son, Hanny, of his muteness and intellectual disability. About the only person Mrs. Smith defers to is Father Wilfred, dominating her mild-mannered, slightly henpecked husband and her two sons, the younger of whom is the narrator, known only as Tonto, a nickname given to him by Father Bernard, the new priest.

They are a family warped by the mother’s desire to cure her special-needs son and her fanatical devotion to the type of punitive Catholicism practiced by Father Wilfred, who believed that “unless one suffered…one could not be a true Christian.” To him, small transgressions were the steppingstones to eternal damnation and must be countered with elaborate rituals of atonement.

Father Bernard, in contrast, is a Pope Francis type, a gentle, loving shepherd to his flock. To celebrate his arrival, the parish decides to resurrect the tradition of the Easter retreat to the Loney.

The Loney, however, is more forbidding and inhospitable than the pilgrims remember. In the odd house where they are staying, Mr. Smith finds a hidden room that he concludes served as some sort of hospice for dying children. The locals are threatening and unfriendly, engaging in bizarre rituals in the forest. The church has fallen into disrepair and, on Easter Sunday, someone vandalizes its crucifix and chains the doors so the congregation cannot enter.

Mysterious newcomers — a man with a limp, a glamorous woman, and a pregnant teenager who heals the broken wing of a gull with a touch of her fingers — have moved into an abandoned house once inhabited by a purported witch who was lynched by the locals, causing the Devil to flee from the Loney in a fit of rage.

Strange things happen to the villagers. A woman who was blind can now see. A man with a crippled hand suddenly has full use of it. Strange things also happen to the land. Trees flower and produce ripe fruit in early spring. A muddy patch transforms overnight into a meadow of lush grass. An out-of-season cloud of butterflies descends upon a field.

Wrought in Hurley’s exquisitely menacing prose, the eerie details and sinister plotlines build. A shotgun is found hidden under the floorboards. The Smith boys visit the enigmatic trio living in the witch’s house and discover envelopes of cash with a list of names, some of which they recognize. A dog tears apart a newborn lamb.

With a hint of foreshadowing here, an exquisitely macabre detail there, the writing sweeps the reader along as forcefully and inexorably as the deadly tides of the Loney.

Yet after weaving a dark tapestry rich with foreboding and malevolence, the author leaves many threads dangling, forcing readers to reach their own conclusions. What was the significance of the dead baby who appears in the first chapter and is described in horrifying detail at the end? What about the hidden room that Mr. Smith discovered? Was what happens to Hanny a miracle or the work of Satan?

Some readers may feel cheated by a shaggy-dog story. Others will savor the evocative elegance of the writing, the crescendo of creepiness, and a narrative that explores the symbiotic relationship between God and the Devil and the blurry boundary between superstition and religion.