The Limits of Presidential Power: A Citizen’s Guide to the Law 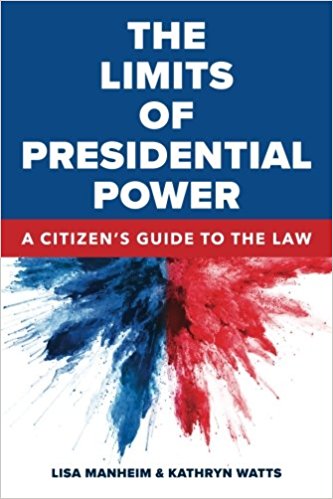 The president of the United States is regularly referred to as the most powerful person in the world: chief executive of the world's richest country, commander-in-chief of the world's strongest military. Yet presidents themselves rarely self-identify in those terms, perhaps because they quickly become painfully aware of the limits of their power.

Lisa Manheim and Kathryn Watts, law professors at the University of Washington in Seattle, have chosen the first year of Donald Trump's semiautocratic presidency to provide a primer on those limits. In The Limits of Presidential Power, the two former Supreme Court law clerks take readers through a well-organized civics course on the sources of the president's powers and the various constitutional and legal checks on those powers.

Those checks include Congress, the courts, executive branch civil servants, the states, and the various institutions that comprise what pro-democracy organizations call "civil society" — an independent press, private interest groups, and citizen activists. All of the presidents before Trump have met resistance from these institutions and groups, but Trump is unique in questioning their very legitimacy.

Thus, Trump demeaned the "so-called judge," a Republican appointee, who first blocked his Muslim travel ban. He complains of his inability to control the Justice Department or even his own attorney general. He views civil-service-protected federal employees as part of a "deep state" conspiracy against his policies. And he denounces the First Amendment-protected press as "FAKE NEWS," as though name-calling answers accusations and criticisms of his actions and policies.

The authors acknowledge their emphasis is on law, not politics. This approach is in contrast to the seminal work in this field: Presidential Power by Richard E. Neustadt, written in the 1950s and updated in 1990 after the Reagan presidency. Neustadt, an aide in Harry Truman's White House, explored the political aspects of the presidency, emphasizing above all "the power to persuade."

Manheim and Watts open with an epigram from Truman, included in Neustadt's book, on how he expected his successor, the former general Dwight Eisenhower, to react to the presidency: "Poor Ike!" Truman remarked. "It won't be a bit like the Army. He'll find it very frustrating."

All the more so for Trump, president of an eponymous multinational company, with no training or experience in law or politics and no experience in having his views or orders questioned.

The limits on the president's powers, Manheim and Watts explain, stem from what they call the "innovative political arrangements" that the Framers created in the Constitution. These include not only the three separate branches of the national government, with their intertwined checks and balances, but also the federal structure, with a national government of limited powers and state governments with residual sovereignty. The authors quote Justice Anthony M. Kennedy's insight that the Framers "split the atom of sovereignty" to better protect individual liberty.

Succeeding chapters emphasize the limits on the president's powers. Congress may balk at a president's proposals even when controlled by his own party. Thus, the Republican-majority Congress shelved George W. Bush's proposal to privatize Social Security, and the Democratic-majority Congress stymied Barack Obama's pledge to close the Guantánamo prison camp. Trump likewise failed to persuade the Republican-controlled Congress last year to “repeal and replace Obamacare.”

The Supreme Court or lower federal court judges may block a president’s actions, whether on statutory or constitutional grounds — most notably, perhaps, when it barred Truman from seizing steel mills to keep them in operation during the Korean War. Trump has gotten more than a taste of judicial review with multiple rulings against his Muslim travel ban and his plan to block federal funds for "sanctuary cities" impeding his immigration policies.

Within the executive branch, presidential appointees can usually be counted on for loyalty, but civil servants' loyalties "lie elsewhere," the authors write, not to the president but to the law and to their respective professions. Trump learned that lesson when he felt forced to fire the acting attorney general, Sally Yates, for refusing to defend the travel ban in court.

States can either "help or hinder" a president's agenda. The alternatives are illustrated by the differing positions that red and blue states took on climate change during the Obama years, and continue to take on immigration.

Manheim and Watts view their work not as a textbook, however, but a "citizen's guide." They close by emphasizing "ways to get involved," not just by voting or writing to lawmakers, but by more proactive steps such as staying informed and supporting interest groups to work toward desired outcomes.

In that sense, the book misses the mark somewhat by focusing on the limits on powers instead of their uses. With government dysfunction seen as high at many levels, a primer is equally needed to examine and teach the hard work of politics: forming coalitions, winning elections, setting agendas, and implementing policies.

Sadly, the Trump era hardly lends itself to constructive civic engagement, but instead invites study of the legal tools to constrain the world's most powerful — and therefore most dangerous — leader.