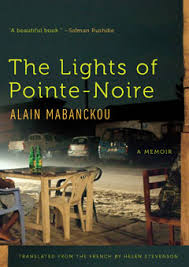 Readers with dual heritage and those who possess a love of eloquent stories will find much value in Alain Mabanckou’s memoir, The Lights of Pointe-Noire.

A rich tapestry of past and present, Lights recounts Mabanckou’s return to his native Republic of the Congo where he visits the southeastern coastal town of his childhood. More than two decades have passed, during which his mother and the man he called his father have died. He did not attend their funerals. Yet, rather than haunt the scenes of this story, the lives of his parents inhabit the book through recollections as real as if they were happening now.

Mabanckou’s prose is infused with wisdom that comes from an honest appraisal of his youth and frankness about the physical and emotional distance he keeps from his family. Upon his return to the Congo, however, he must face his ghosts head-on.

Mabanckou, an esteemed French-Congolese writer and UCLA professor, begins by admitting he let others believe his mother was alive after her death, a lie constructed to postpone his mourning.

He turns to the stars to tell the story of an old woman whose face could be seen in the moon. With these celestial lights, the author creates a mythic backdrop for a belief system that remains intact, guarded by reason-resistant reverence.

The legend of the moon-woman who sacrificed her life for the Congo is woven together with the story of Mabanckou’s mother, Maman Pauline, who gave her all for the betterment of her son. Mabanckou describes her as a woman from nowhere who made a place for herself and her family. Although Mabanckou was expected back in Pointe-Noire upon his mother’s death in 1995, he did not return then. Instead, he returned to the habit of keeping family alive.

At the entrance to his grandmother’s plot of land, the current-day accounts begin in earnest. Here and throughout the book, Mabanckou uses scene and dialogue to ground the reader in a sense of time, place, and family. But all is not ideal: Mabanckou’s return almost always includes requests, or demands, for money.

Such visits are embroidered with tales that may appear to be superstition but in this culture are more about cause and effect. One of Mabanckou’s cousins, for example, is admitted to the hospital during his visit and unfortunately assigned the same room in which another family member died. Despite fears of the cousin’s inevitable doom, she, at least at this writing, stayed alive.

Eventually, perhaps inevitably, Mabanckou is asked why he writes. While he initially claims not to know, in the next breath, he mentions a search for reasons to love Pointe-Noire, a place that has been smashed up and consumed by anarchic growth. Or perhaps it is to justify his affinity for it despite such qualities.

His forthright introspection creates a deep and compelling story, as in the description of Cinema Rex. Once considered a Cinema Paradiso, where Mabanckou feasted on American culture as a child, now it is a Pentecostal church, where he is initially unwelcome.

Mabanckou left Congo in 1989, when he was 22, and returned to a place that has changed beyond knowing. Yet it is partly the writer’s role to examine the unsettling sense of belonging and alienation that informs such returns. Mabanckou meets this challenge by balancing past with present and introspection with freedom, and he lets the people in his story speak for themselves. In the end, he wonders what every returnee and writer whose work embodies a sense of place wonders: When will I return again?

Adele Annesi is a writer, editor and teacher, and co-author of Now What? The Creative Writer's Guide to Success After the MFA. A co-founder of the Ridgefield Writers Conference, she has had work published in various journals, including Southern Literary Review, where she was managing editor. Her stories have been anthologized for Chatter House Press and Fairfield University, where she received an MFA in creative writing, and her flash fiction has been adapted for the stage. She is currently completing a novel of memory set in Italy.