An irresistible homage to the world of words. 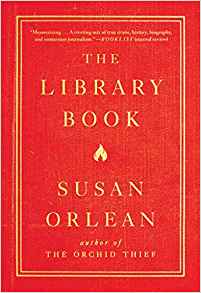 As a writer who reveres libraries and genuflects to librarians, I was predisposed to embrace The Library Book by Susan Orlean. I just didn’t expect to fall in love so quickly. But by page three, I was head over heels when I read how she made magic of the mundane. Strolling through the grounds of the Central Library in Los Angeles, she noticed: “Pigeons the color of concrete marched in a bossy staccato.”

God really is in the details.

Orlean, a staff writer for the New Yorker, was onsite in downtown L.A., “a glassy landscape of office buildings,” to research the cause and effect of the single biggest library fire in U.S. history, which occurred in April 1986. You may not recall reading about the library disaster; it occurred the same day as the Chernobyl nuclear meltdown, when most of us were waiting to see if we were about to witness global incineration.

The Library Book is not simply an investigation into a fire that burned for seven-and-a-half hours and left 400,000 books in ashes and 700,000 more covered in soot and slime from the over 3 million gallons of water sprayed to extinguish the flames. In addition to the mystery of who or what started the inferno, the book becomes a fascinating mix of crime and history and biography and investigative journalism, all told by a superb storyteller who holds you in thrall to the pathology of arson, a subject you might not realize you care about until you pick up this book, which the publisher has generously bound in red paper-over-board and embossed in gold.

Orlean takes you on her journey as she interviews detectives, policemen, and firefighters. She gives you the physics of fire and the terror of libricide. You become engaged; you want to find the culprit; you agonize for the traumatized librarians; you cheer for the hundreds of volunteers who rush to help remove the smoked wreckage from the Central Library; you applaud the man — the wonderful man — from ARCO who opens his corporate headquarters across the street to warehouse the damaged books, and then helps raise $14 million to rebuild the library.

With this book, Orlean wrote a love story to her mother, who first introduced her as a little girl to the pleasures of reading at the Bertram Woods Library in Cleveland, Ohio. Sadly, her mother slipped into dementia and died before she could read her daughter’s tribute to libraries and her homage to librarians, who stand as the citadels of civilization.

Orlean makes music with her words; they warble and trill across her pages and sing straight into your heart. She writes about the mission of a library as “a gathering pool of narratives and of the people who come to find them. It is where we can glimpse immortality; in the library, we can live forever.”

She makes you see a library like a giant oak tree spreading its branches to give shade and comfort and beauty to a community. The destruction of either tears an ugly gash in the landscape, leaving a crater of dashed dreams. Yet, as she reports, there are more than 200 library fires in the U.S. every year — and most are set on purpose.

If it’s a sin to kill a mockingbird, it’s a crime against humanity to burn a library, because, as the German poet Heinrich Heine wrote in the 19th century: “Where they have burned books, they will burn human beings.” World War II proved that prediction by destroying more books and libraries than any event in history, and killing over 60 million people, making that war the world’s deadliest. The chain that links books and libraries and human beings is indisputable.

Orlean opens her book by quoting from William Faulkner’s Light in August: “Memory believes before knowing remembers.” So, it seems fitting to conclude here with a quote from Faulkner’s 1950 Nobel Prize address, in which he talks about the writer’s duty to write “from the heart…to help man endure by lifting his heart.” Susan Orlean has done her duty with The Library Book.

Kitty Kelley is the author of several number-one New York Times bestsellers, including Jackie Oh!, Nancy Reagan, and The Family: The Real Story Behind the Bush Dynasty. She is a board member of Reading is Fundamental.