The Legendary Detective: The Private Eye in Fact and Fiction

A scholarly look at fictional gumshoes and their real-life counterparts. 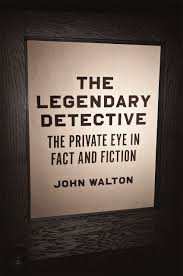 To understand the evolution of the detective figure in crime stories and novels, you might take any number of approaches. You could chart an evolution over time: eras when the genius detective predominated, or when the street-smart hardboiled hero took over, or the rise of police procedurals and the emergence of the collective detective. Or maybe you could craft a categorical listing instead of a chronological one: amateur sleuths, detectives for hire, a police force sanctioned by the government.

Either approach might reveal how traditions evolve and expand and how writers work within conventions or against them in equal measure; comparisons and contrasts might help deepen a reader’s understanding of the entire genre.

In his new study, The Legendary Detective: The Private Eye in Fact and Fiction, John Walton, a professor of sociology at the University of California, Davis, both narrows that focus — to private investigators, as the subtitle explains — and broadens it, examining not just the development of detective fiction but also the history of real-life detective agencies, both in the U.S. and abroad. Tracing those parallel histories also readjusts the focus toward how those histories create legend, which the author defines as “a living and evolving cultural phenomenon.”

But Walton’s thesis is more subtle and extensive than simply arguing that fact and fiction colluded to construct this legend; Instead, as he says late in the book, “This is a study of American society and culture that reveals how the detective business arose, fashioning its own fictions, in tandem with a culture industry that was constrained by commercial fact, each a piece of the larger political economy and both subject to an essential interplay.” The word he emphasizes as part of the connection here is “symbiotic.”

As you might already be able to tell, The Legendary Detective is intended more for an academic audience than a casual readership. Walton doesn’t draw heavily on the tactics and techniques of creative nonfiction, and the book remains a steadfast sociological history. But, to my mind, the subject matter gives the book potential for wider, more general consumption as well.

While Dashiell Hammett’s name comes up in the first line of the book, it’s really in the final chapters — “The Storied Detective” and “Making a Legend” — where Walton most fully emphasizes the work of fiction writers including Poe, Hammett, Carroll John Daly, and Erle Stanley Gardner, among others, and examines detective fiction on the radio, on TV, and in film, leading up to an analysis of 1974’s “Chinatown,” which he calls the fullest exemplification of the film detective story.

But rather than concentrate on questions of artistry — how writers work within or against tradition, for example — Walton offers insights into the commercial aspects behind these developments: explosive growth in the publishing industry from the 1830s onward; the rise in population; high literacy rates; the expansion of libraries; technological advances in printing; even changes in postal service — rate reductions that made it easier to mail magazines.

Additionally, he examines the readership of various periodicals — noting, for example, another scholar’s work in reconstructing the typical Black Mask magazine reader from the types of advertisements in the magazine — and the relationship between editors and writers, citing how Black Mask editor Joseph Shaw informed contributors about the “commercial ideal” for the magazine.

Walton also quotes Erle Stanley Gardner’s letter to Shaw about writing to order: “If you’ll take the trouble to tell me just what you like in what I send in and just what you don’t like I think I can cooperate with you pretty closely. Remember that what I’m trying to do is write stories that’ll sell magazines.”

Forget self-expression as part of the process. Writing is a commercial enterprise, an industry. “I am a fiction factory,” concluded Gardner.

If the examination of detective fiction as a business venture punctuates this study, the bulk of Walton’s book details the development of the actual detective industry, looking not just at the famous Pinkertons, but also at a range of other agencies, including the Burns National Detective Agency, the Railway Audit and Inspection Co., and others.

The clearest intersection of fact and fiction here may lie in Walton’s study of how carefully operative reports were constructed (resonant with an analysis that Nathan Ward did in his recent book on Hammett, The Lost Detective) and in his look at the memoirs penned by detectives such as Allan Pinkerton, William Burns, and others. Those memoirs “doubled as agency publicity and true crime stories,” likely influencing fiction writers, whose work then upped the ante on the memoirist as well.

“In the gray area between documentary evidence and fiction,” Walton writes, “a style was improvised that would infuse the cultural imagination of the private eye.”

But those memoirs are only part of the story, and Walton’s coverage of the detective business, particularly in the U.S., is comprehensive. He illuminates the factors that contributed to the birth of the profession, including rapid urbanization, changes in commerce, and growing labor unrest, among others.

Walton examines the various types of agencies, from national corporations to independent businesses; crafts portraits of the typical operative as a family man rather than the romantic loner of legend; and details the range of services professionals offered: industrial work concentrated on labor unions, as well as “legal problems, domestic disputes, and insurance work” — but very little of it “bona fide crime,” as the fictions might otherwise suggest. He also explores the various means (not always ethical or legal) that detectives used en route to their ends — the “evil in ‘necessary evil,’” as he puts it.

The thoroughness of Walton’s study contributes to a compelling and convincing narrative, and though the book is intended more for a scholarly audience, there are times when Walton’s personality shines through, too.

In one of the many cases detailed in these pages, he reveals how operatives often had to indulge in “off-duty socializing” by following an investigator posing as a theater usher to infiltrate potential union activity. The operative’s report confirms drinks at a local tavern, mentions plans for a masquerade ball, and then offers a sudden revelation: “I made the discovery that I was associating with a bunch of perverts.” Later, the operative is invited to spend the night with the suspect and reports that he did so, “putting in a very hectic night.”

Walton’s commentary — a deadpan one-liner — is pitch-perfect: “No details about the hectic night were offered.”

Art Taylor is author of On the Road with Del & Louise: A Novel in Stories. His short fiction has won two Agatha awards, an Anthony, a Macavity, and three consecutive Derringer awards.

When Truth Is All You Have: A Memoir of Faith, Justice, and Freedom for the Wrongly Convicted

By Jim McCloskey and Philip Lerman