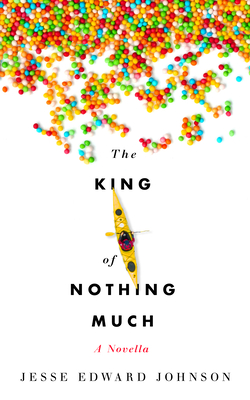 Jesse Edward Johnson’s The King of Nothing Much is a slice-of-life comedy in which Weldon Tines, a 40-something dad living in a luxurious Seattle suburb, struggles to find his place in the world.

Weldon is a model of how men of a certain age adapt (or don’t) to changes in their families and lives. His heightened ennui forms the heart of the novella. He’s a stay-at-home dad in a community where such creatures are unexpected and unpopular. Fortunately, his wife, Deb, is a driven attorney who makes more than enough to support the family and doesn’t hold Weldon’s lack of ambition against him. His self-doubt is entirely self-generated.

Weldon asks himself the same question voiced by many a father: “What is my purpose and where am I going from here?”

As part of the answer, two mantras recur throughout the story. The first is an acknowledgment of Weldon’s mortality. He repeatedly intones, “My life is over halfway over.” Although a bit on the pessimistic side vis-a-vis life expectancy, this take isn’t entirely inappropriate. Weldon has been out of the workforce for a long time, so his options for returning are limited. It’s too late to start a band, and little in his life appeals to him.

This march of time drives the novella’s second theme: the need of a parent to be needed. Weldon can’t shake the thought, “My purpose on this earth is to protect you.” As his twins, Reese and Danny, enter kindergarten, and his elder daughter, Presley, her teen years, he simply doesn’t feel essential anymore. The twins have developed a social life of their own and, when she’s not buried in her phone, Presley runs off to hang out with her new boyfriend. None of them require their father much.

Unfortunately, for Weldon, this raises the question: Who protects the obsolete protector?

His choice to prioritize parenthood over career has left him exposed to the withering looks of the hard-charging (read: financially successful) parents around him. The other mothers and fathers at a kids’ party barely acknowledge him — that is, until he accidentally injures the birthday boy while playing with the children. Then they regard him with disdain.

This trespass makes Weldon an easy target for the alpha dad of the injured child, who uses Weldon’s guilt to impose upon him for a favor. He wants Weldon to take his son on the Tines’ family camping trip to help toughen the boy up. Wracked by remorse and submission, Weldon feels he has no choice but to say yes.

Weldon uses humor and righteous indignation as a shell to protect himself against the dangerous world, but these tactics aren’t enough. Deb is empathetic but values her work more than her marriage. And his kids see him as a chauffeur at best and a nuisance at worst. Ultimately, Weldon just seems so very, very alone.

This pervasive loneliness is the novella’s strength. Weldon’s problems are, in many ways, ours. We, too, can struggle with the desire to be needed and the feeling that life is passing us by in favor of more successful, more engaged participants. Similar to Weldon, we may be tortured by the thought that the world goes on even if we’re standing still. Seeing Weldon, we see ourselves and our own unmet needs and are, for a minute, able to laugh with him.

The weakness in The King of Nothing Much lies in the too-easy caricatures of its supporting cast. Whereas Weldon’s trials seem universal and human, theirs seem lazily outlined. The arrogant father who guilts Weldon into taking his son off his hands is indistinguishable from every heavy-handed jerk who thinks, “I’ll bend you to my will!” in a PG-13 movie.

Weldon’s own wife barely appears in the story, except to upend him emotionally. And the child he’s asked to mentor is a stereotypical wealthy nerd, used to getting his way and unable to deal with discomfort. We’ve seen them all before, or perhaps we haven’t. In real life, people don’t come in such neat packages.

In these days of quarantine, however, perhaps this is being persnickety. Maybe we do need a simple read that allows us to feel seen in a way Weldon is not. If you’re looking for something short to take your mind off the world burning around us, The King of Nothing Much may be just the thing.