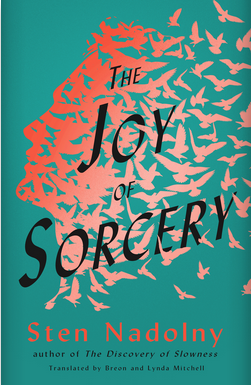 After a lifetime of sorcery, Pahroc has mastered any number of abilities that children and adults alike daydream about. He can fly across an ocean, absorb entire books in moments with a touch of the spine, and make himself invisible on command. But as he unfolds those secrets to his granddaughter in the letters that comprise Sten Nadolny’s novel The Joy of Sorcery, he also can’t help but take a moment now and then to praise the exact opposite — the joys of not performing sorcery.

Pahroc’s granddaughter, Mathilda, is the only member of his family other than himself and his late wife to show signs of the magical gift. The aging sorcerer resolves to share all of his life’s accumulated knowledge with her before passing on, from his youth in a Germany wedged between two world wars to a career running pyrotechnics in the movie business.

In just his second letter, however (each one focused on a different form of sorcery), Pahroc encourages Mathilda to enjoy the more concrete aspects of life. He urges her to try building with her own hands, reading a book page by page, and writing letters out herself because “then you’ll weigh every word. All weight, like gravity itself, leads to effort, but it grounds you.”

It’s a theme that pervades the novel, and it places Nadolny’s story more in the tradition of magical realism than high fantasy. Pahroc’s abilities can capture the imagination and empower him momentarily, but they are never enough to help him escape reality.

The letters start with Pahroc’s own magical education as a young man in Berlin during the early 20th century. Taken under the wing of his neighbor Schlossek, a master sorcerer in his own right, Pahroc learns the importance of keeping his gift a secret and understanding the mechanics of how it works.

The author seems to enjoy delving into the laws that govern sorcery in this world, and it shows in these early stages of the story. Even when he indulges in the power fantasy of Pahroc’s abilities to extend an arm across the room or read minds, he just as often revels in their limitations.

A magically lengthened arm becomes weaker the farther it reaches, while telepathy will leave even the most powerful sorcerer famished. These sequences can occasionally feel more like a rulebook than a narrative, but they are important for both establishing the boundaries of Pahroc’s sorcery and grounding the reader in his experience.

Fortunately, Pahroc is eager to share his life with his granddaughter, and it doesn’t take long before his letters begin to dwell more on recollections than rules. He recounts his burgeoning rivalry with another student sorcerer, Schneidebein, and how he met the love of his life, Emma. But Pahroc’s story comes alive most when it intersects with Germany’s own history, even if he rarely dwells on any single period for long.

As Pahroc comes of age, so does the Nazi regime. Immediately sympathetic to the Jewish people and others oppressed by the new government, he channels his powers to help them however he can. Interestingly, Pahroc never calls the party or its followers by name. Hitler becomes “the man with the square mustache,” Nazis are “the party of arms raised stiffly in salute,” and the swastika is described as “that symbol that looks like a cattle brand.”

In the decades following the war, Pahroc briefly outlines Germany’s own free-love movement, a rebellion built on the younger generation’s frustration with and mistrust of its predecessors for allowing the horrors of the Holocaust and World War II to happen. It’s a compelling glimpse into the nation’s post-war political dynamics at a time when many histories are eager to move on to the Cold War.

The story stumbles somewhat in its later stages, as Pahroc is set adrift after the loss of his beloved wife. While his children remain, they rarely serve as anything more than a reminder that time is passing. With nothing else to which he can tether his sense of purpose, Pahroc begins using his powers for con jobs rather than to help the vulnerable.

It’s an effective depiction of a man unmoored from his sense of meaning in life, but that doesn’t make it any easier to buy the sense of injustice Nadolny wants the reader to feel when it all goes wrong.

The novel ends with an afterword that abruptly abandons the grounded realism defining most of the story and introduces perhaps one twist too many. It does, however, serve as a useful coda that ends Pahroc’s tale of what we choose to pass on to the future with a stirring call for the next generation to learn the lessons of the past.

Ultimately, what Pahroc chooses to pass on to his granddaughter and the reader is a reminder that life has a magic all its own. “Life holds a joy in store that can’t be conjured up,” he writes in his final letter. “As if sitting by a stream, one has to wait for it to come drifting along, then offer it a friendly invitation to stay a while.”

For us mortals, it’s a reassuring call to find our own wonder in the world.

Drew Woolley is a freelance writer and assistant editor at WordSouth. He enjoys checking out live music wherever it may be, exploring North Alabama’s hiking trails, and trying to convince his neighbors that soccer really is pretty cool.