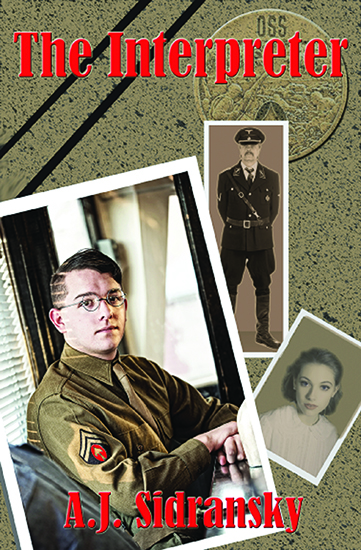 The Interpreter, the first installment in A.J. Sidransky’s “Justice” series, is a highly original look at the dimensions and consequences of the Holocaust that is at once emotionally devastating and technically impressive. It’s a work of fiction based on factual elements in the life of the author’s extended family.

The story of Kurt Berlin, and the Jewish Berlin family, needed to be told, and Sidransky fashions it as a testimony to the resilience of survivors and the demonic cruelty of Hitler’s regime and its brutal, sadistic culture.

The novel has two timelines. One takes readers into Vienna in 1939, focusing on Kurt as a sensitive and intelligent youngster in his teens. The other, which alternates with the first, presents an older and almost totally devastated Kurt in 1945 Brussels. While other locations come briefly into play, these two dominate.

Vienna in 1939 is reeling from the Anschluss of the year before, the annexation by Hitler of Austria into the now-expanded German nation. This forced union changed the game for Austrians, especially Austrian Jews, who had their heads in the sand. The future of a Greater Germany under Nazi rule stems from this early step.

In the Vienna chapters, the author follows the struggles of Kurt and his parents, Hertz and Berta, as they pass through the crippling of European Jewry. They accumulate resources to bribe petty officials and malleable non-Jewish neighbors; they shape and solidify Aryan identities; and they strive to arrange transport away from the hell that Europe is becoming.

The detail in these chapters is stunning. How does Hertz, who wears a Nazi armband, manage to pass himself off as the Reich’s new representative to the Dominican Republic? Largely, it’s through the simple ploy of dressing well.

Young Kurt has a special concern. His girlfriend, Elsa, though seemingly protected in a monastery, is still subject to great peril. Should he stay behind to be with her, or should he try to leave with his parents and other relatives?

The 1945 timeline conveys the immediate postwar situation in Brussels. Kurt is six years older than when we last encountered him in transit to a new life and U.S. citizenship. The American military is looking for ways to counter the Soviet push toward world dominance. Both the U.S. and Russia are seizing upon incarcerated Nazis with special abilities. It’s a strange competition.

Kurt, because of his superb language skills, is assigned as an interpreter for this project. Colonel McClain is the head of his task group. The selected prisoner, no doubt one of many, is Joachim von Hauptmann, an unrepentant, Jew-hating Nazi who seeks to make a deal. He has information as his bargaining chip.

There are other members of the Army interviewing team, notably Captain Rosenthaller, a fellow Jew, whose neutral responses to von Hauptmann are puzzling and hurtful to Kurt. Unlike his young interpreter, Rosenthaller does not seem bothered by the prisoner’s outspoken loathing of Jews. Kurt is nauseated by what he hears.

It creates an eerie rhythm, bathed in the undertow of Kurt’s inner turmoil as he fights to maintain his composure. How can someone be this evil? How can this Nazi be rewarded for narrating his own horrible actions? How can he be trusted? And what if he holds the key to finding Elsa, the girl Kurt left behind?

In the later chapters, Sidransky intersperses both timelines within the Brussels setting. It’s an amazing juggling act in which the past and present are like pins in the air waiting to collide with each other. At once heartwarming and frightening, The Interpreter brings history to life.

The Last Romantics: A Novel

Four children learn to care for each other — and grow up — after a shocking death transforms their family.