The Illness Lesson: A Novel 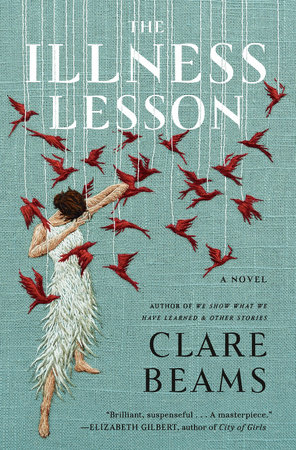 Not since Alfred Hitchcock’s “The Birds” has a flock of aggressive avians taken front and center in a narrative as they do in Clare Beams’ provocative debut novel, The Illness Lesson. Belligerent red, trilling hearts dominate the imagery and themes of her engrossing treatment of progressive education in mid-19th-century New England.

The story follows one academic year from its inception to the demise of the Trilling Heart School. Founded on the ash heap of a failed transcendental community, Birch Hill Farm, the new school is no phoenix rising.

It is fated for disaster from the start. Its mission statement is to find the “foreignness of the fifteen year-old girl” in order to reveal the “truest, deepest self” through literature, moral reasoning, scientific inquiry, and mathematics. It promises the discovery of the “genderless soul.”

Caroline Hood, 29, grew up as a child of the earlier experimental endeavor under the tutelage of her famous essayist father, Samuel, on the remote farm outside the nearby rural town of Ashwell, Massachusetts. She was 6 when her mother died under mysterious circumstances, and Samuel has been her only supportive companion.

The best-laid plans seem to be moving along fairly smoothly — seven students have enrolled; the barn has been refinished as a one-room schoolhouse — until Caroline has a chance encounter with Eliza Pearson Bell.

Eliza’s deceased father, Miles, was one of the original members of the first school. He became infamous by writing The Darkening Glass, a scandalous roman a clef based none too subtly on an alleged adulterous triangle involving him and Caroline’s parents. Samuel has, in essence, abolished the successful, salacious novel from the premises. But try keeping it from curious adolescent eyes and minds.

After petitioning Caroline for entrance into the school and pleading with her mother and stepfather (who are soon off to Europe for an extended period of time), Eliza becomes student number eight. She also becomes the fly in the ointment, the apple that upsets the cart.

Caroline should have known better. She thinks Eliza’s presence will give the school some credence and prestige. She convinces her father that the word of mouth they will get from having her “will make us.” She ignores the furious flutter of the ominous red birds scurrying about when she meets Eliza.

Eliza is not the only outsider to enter the fold of the initiates of the new project. David Moore, a self-taught naturist from Ohio, is hired to teach natural history, mathematics, moral philosophy, and history. He is recognized as Samuel’s “last disciple and unexpected hope.”

Caroline is immediately drawn to his handsomeness and intellect. A “flurry of trilling hearts” clouds the sky when they meet. But he harbors a secret that will affect their entire relationship.

When classes begin in earnest, the year goes quickly from dismal to worse. A “blur” of birds constantly hovers near the barn and in the fields. Favorite objects — an earring, a bit of lace, some hair ribbons — go missing. Then, one by one, the girls fall ill. Eliza unexplainably faints, develops a rash, and gets a red spot in her eye. Others begin to exhibit seizures until the whole female population — including Caroline — suffers from mysterious fits and discomforts.

A supposedly reputable local doctor is called in to diagnose the situation. He determines the cause is tension from “hysteria.” The only cure is “pelvic manipulation leading to paroxysm.” Each female — including Caroline — is subjected to the treatment.

Beams excels in the details of this prescription. The sections on symptoms and their causes expose archaic misinformation and enforced misogyny.

Caroline begins to suspect something is awry. She secretly asserts her independence, first by writing to the private school Eliza attended previously. She discovers an unexpected ally in one of the staff, and another in someone with an intimate connection to David.

Then she confronts her father about the circumstances surrounding her mother’s death. Pearson’s novel hinted at a cover up. When Caroline finally recognizes the truth, she decides the school must close. The “grand educational experiment” must be deemed a grand failure. They were “making girls for a world that does not exist.” And she decides she must determine her own future.

Despite its finely wrought prose and incisive dialogue, The Illness Lesson is often overburdened by its obvious message and its telegraphed plot. Nevertheless, it is a scathing indictment of early toxic masculinity, a measured diatribe against male-dominated medical and educational institutions.

Ultimately, it is a blistering condemnation of a patriarchal society which would deter the empowerment of independent female thinking. It also suggests that sometimes a bird is just a bird. Except when it’s not.