The House at Bishopsgate: A Novel

In 17th-century London, a cursed diamond causes trouble for a wealthy merchant and his semi-estranged wife. 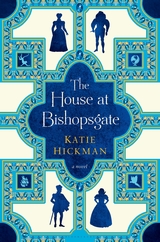 Katie Hickman’s new novel, The House at Bishopsgate, follows the life of Paul Pindar and his wife, Celia, who have just relocated to London in 1611 after spending several years in Syria.

While the two love each other dearly, a traumatic event early in their marriage has caused a rift; Paul has never lain with Celia as man and wife in the entirety of their seven-year union.

As the two try to repair their marriage at Paul’s Bishopsgate home in London, the valuable, mysterious Sultan Blue diamond in their possession, an overbearing widow insinuates herself into — and soon takes over — the household. Her odd, disturbing hold on the couple begins to loosen only when an old friend of Celia’s, Annetta, comes to visit.

Annetta, a former nun and survivor of the plague, immediately recognizes and labels the widow as an enemy. Working with Paul, she manages to unravel the dark mystery surrounding this woman, including the widow’s interest in the diamond’s alleged dark magic.

Hickman’s writing is deft, each scene crafted with love and attention to detail. The novel becomes an experience, a total immersion in 17th-century London. In nearly every chapter, the author portrays the atmosphere, surroundings, and even minor objects (such as the desk in which Paul hides the infamous diamond) in a manner that transports the reader.

Hickman also displays her talent for the craft by fleshing out each character, even if they appear only briefly. This skill is quite impressive as the novel is chockfull of various people, from servants to royals. They all feel impressively real.

Despite the sharp writing, however, the novel has a few major problems that are difficult to overlook. A lot seems to be happening in the story, but none of it happens very fast, requiring far too much patience from the reader. The novel could have been tighter had a deft editor slashed 200 or so pages.

While the descriptions of the furniture, homes, and streets of London are a pleasure to read, they soon become tedious and irritating. For instance, one entire chapter is devoted to the types of jewels and furniture the Pindars own. The verbosity of such sections is frustrating, especially as they do little to flesh out characters or move the plot forward.

Furthermore, while the numerous characters are intriguing, the novel gives far too much of their backstory. In one particular chapter, a long stretch is devoted to Annetta’s love interest imagining a conversation with her. The scene is a waste of precious pages and unnecessarily halts the momentum of the plot.

Hickman’s book has much to appreciate, but it will appeal more to lovers of historical fiction than to anyone intrigued by the “mysterious” properties of the diamond. Regardless, all readers would have benefited from a much shorter and more tightly written novel.