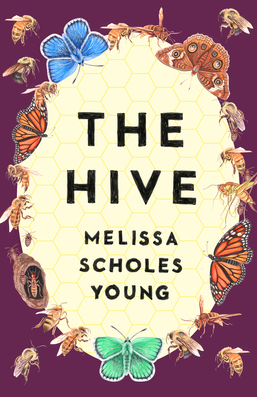 The time is the months leading up to the 2008 presidential election. The place is Cape Girardeau, Missouri. Decidedly not Obama Country. In the distressed economy, the Fehlers are struggling to keep their fourth-generation pest-control business afloat. That their surname is German for “mistake” will not be lost on bilingual readers.

Author Melissa Scholes Young opens her new novel, The Hive, with a succinct, immediately involving introduction to the family. Parents Grace and Robbie are vacationing at the Fehler Family Fish Camp (“a burden both beloved and neglected”) with daughters Maggie, Jules, Tammy, and Kate.

The prologue and epilogue are titled “Fehler Sisters.” In the three main sections of the novel, each chapter is named for one family member. Even with the narrative not being in the first person, Scholes Young does an excellent job of conveying the voice and personality of each family member in his or her respective chapters. The daughters have their distinct tones, their distinct assets, their distinct challenges, as do their parents, all of it amid the overarching problem of how to keep the family business going.

Patriarch Robbie is surrounded by females. He wanted a son, and there is some issue about succession. Robbie is a ham-radio operator and doesn’t like feminists or Democrats, which is a surprise to no one who knows him or is reading about him.

Mother Grace is fighting for her family’s survival, to the extent that she has become a literal survivalist obsessively preparing for the inevitable Doomsday. She listens to Rush Limbaugh (a local boy who made good in the eyes of his hometown fans) and is a God-fearing Catholic. She’s also having an affair with one of the employees at the family company.

Eldest daughter Maggie works in the company’s office. She has big plans for expanding the business. Her dad doesn’t think this is the time to be spending more, even if his daughter assures him that it’s an investment. He either ignores or ridicules her painstakingly presented business plans.

Jules is reconsidering her goal of running for president of the Young Republicans at the University of Missouri. Her boyfriend, Niko, is biracial.

Tammy, the “prettiest of the sisters,” is in Catholic high school, has a steady boyfriend, and is preparing to compete in the Miss Cape Girardeau beauty pageant. And she might be pregnant.

Kate, the baby, keeps track of her father’s beehives and also the hive that is her family. She shares her mother’s Doomsday fears and feels guilty much of the time. “That her parents’ fourth and final try resulted in a girl made apology her life’s motto.” Oh, and she may have a big crush on someone at school. A girl.

This is all rich ground for a captivating story, and Scholes Young’s ease with her prose is certainly evident as she offers memorable and thought-inspiring sentences. “She couldn’t see an injury, but she knew it hurt less if she pretended to care,” for example, and “She hoped her exterior demonstrations might hide her interior ambivalence.”

Problems arise in The Hive, however, when certain plot points feel like clichés. One of the daughters is a cutter. Another announces that she is a vegetarian, and the over-the-top reaction of her carnivore family reads as too predictable.

Tammy’s boyfriend, Wade, asks Niko where he’s from. Upon learning that Niko grew up in Portland, Wade responds, “No, I mean. You know…where are you from from?” And Dad hates the Black Democratic presidential candidate so much that he thinks it’s hilarious when one of his ham-radio friends mails him an Obama monkey doll.

A profound tragedy upends everything, and the challenges the family faces explode. The Hive includes many interesting secondary characters; some of them will be of help to the family as it struggles, others will be hindrances. One is a dog trainer and a medium. She provides several lovely moments in this story. And an exceptionally moving scene occurs when Niko and Jules drive to Chicago on the night of President Obama’s victory.

There are times when it seems like the novel could have benefited from being longer. Plot and character points deserving of a few paragraphs are instead given single sentences. And characters are introduced and then disappear for lengthy periods before reappearing. This staccato style may cause the reader — when encountering a reference to something clearly of significance — to wonder where and when it was mentioned before.

And yet this family and the characters in their orbit have many meaningful, powerful exchanges. The Fehlers, even with the broadest of brushstrokes used to delineate them, each do and say things that come as a surprise and add depth to their layers. The family’s fate will matter to readers; memories of its members will linger.

There is a duel in The Hive between lovely and satisfying narrative aspects and those that are noticeably less so. Ultimately, the compelling qualities prevail, rendering The Hive a novel worth reading.