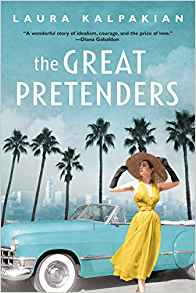 Cue the opening credits. The Great Pretenders, Laura Kalpakian’s treacly overview of mid-1950s Hollywood, shouts too loudly: “Look at me. I’m IMPORTANT.” It opens with a very long cast of leading and supporting characters (including some well-known names). They have shown up, in 1953, for a funeral. The novel closes, in 1956, with another funeral (no celebrities this time).

In short, there are two funerals and no wedding.

Wedged between the bookends of those funerals is the tendentious story of 22-year-old Roxanne Granville. She is “the daughter of Empire, born on a movie set and raised by a studio mogul and his wife.” That mogul, Leon Greene, is the founder of Empire Pictures. That wife, Julia Greene, is the reason for the first funeral. The Greenes are Roxanne’s grandparents.

More than once, in case it isn’t caught the first, second, or third time, Kalpakian clobbers the weary reader over the head with two other key facts about the entitled Roxanne. She was “named for the romantic heroine of a great play,” and a distinctive Hawthornean birthmark on her face often flares up at inopportune times, thus determining her looming fate.

Roxanne’s birth on a movie set is not a figure of speech. In 1931, her father, Rowland Granville, was playing the title role in Empire’s version of Cyrano de Bergerac. Her mother, Florence, suspecting he was “having an affair with an actress who played a nun,” and, despite “intermittent contractions,” insisted on being on set.

Just as Cyrano is about to die in Roxanne’s arms, Florence lets out “a terrible scream, and then several more in quick succession.” The newborn is delivered by a studio nurse and swaddled in Cyrano’s velvet cape by a wardrobe assistant.

Neither parent has any affection for Roxanne. When she is almost 3, her father bolts, making a grander name for himself in England. Her mother flees to South Africa with an animal wrangler and remarries. Her grandparents rescue her from her ersatz orphan status and provide a privileged childhood in a 35-room mansion.

Grandfather Leon, too, has his dalliances, which grandmother Julia endures until he chooses a young actress over her. By 1949, her pride tucked in, Julia whisks off to Paris, taking Roxanne with her. There, at the exclusive L’Oiseau d’Or finishing school, Roxanne learns how to sit up straight in a wing chair, master stairs in high heels, slice the neck off a champagne bottle, and, most importantly, “how to handle men.” This last bit of instruction comes in handy later.

If nothing else, Roxanne has panache with a capital P; her grandfather commissioned a Beverly Hills parfumier to create a cologne, Panache, for her grandmother. Roxanne inherits a half-empty bottle of it, along with a sizeable trust. In addition, she receives a cache of jewelry — a diamond ring, a diamond choker and bracelet, a ruby pendant and earrings, and a long rope of perfectly matched pearls — worn frequently and strategically throughout the novel.

Julia also leaves Roxanne with a survivalist’s dictum on glamour in Tinseltown: “Talk fast, laugh fluidly, gesture economically, and leave behind a shimmering wake.” That advice, added to her self-assurance, carries Roxanne into an independent career. Little does she (or the reader) know what turbulent times lie ahead.

After Julia dies, Roxanne refuses to return to college. Instead, she disassociates herself from her grandfather and establishes the Granville Agency, whose clients are writers of a particular mold. This gives author Kalpakian carte blanche to launch into a mini tour of the Hollywood area.

Roxanne moves into a ramshackle cottage in Malibu, “far north of the fashionable Colony.” After a tawdry encounter with a sleazy executive, she sets up shop in a modest house in Culver City. She tools around in a Silver Bullet.

One day, kismet happens. Having her car repaired, Roxanne encounters the man, Terrence Dexter, who will change her life forever. They meet cute at Reg’s Auto, when Roxanne mistakes him for a customer. Her car will take days to fix, so Terrence drives her back to Hollywood in his cream-colored Porsche convertible. It might as well have been a white horse.

They exchange backstories. Terrence is a reporter for the Challenger, the “voice of the NAACP.” Coincidentally, his uncle, Clarence, has been her grandfather’s butler for several decades. When Julia’s will was read, there were some surprises, paramount among them a “big fat bequest” to the NAACP. The Roxanne-Terrence romance quickly blossoms. But it is not without its complications, chief among them that Terrence is black.

In 1950s Hollywood, this is tantamount to career suicide. A popular actress arrested in a raid at a jazz club is fired when it becomes known she has a black lover. Gossip columnists, including Hedda Hopper, destroy her reputation. Despite his family’s warning that “even if we stand still, trouble will find us,” Terrence continues his perilous romance with Roxanne.

This is not Roxanne’s only dangerous liaison. The other major subject that Kalpakian ties into period Hollywood deals with the McCarthy hearings. Roxanne only takes on writers who have been blacklisted, hiring other scribes to front for the banished scripters. Fraudulent success ensues.

This is the overriding meaning of the book’s title. Everyone (the Platters’ song aside) is a great pretender. This should be no problem in the illusionary world of Hollywood. But political intrigue becomes intertwined with miscegenation, blending into the major theme of social injustice.

Terrence treks to Alabama to cover the bus boycott. Roxanne’s whole life, which is based on “duplicity of one sort or another, on lies, evasions, pretense, and subterfuge,” crumbles. Their romance shatters.

It is more than The Great Pretenders can bear, and the novel devolves into sluggish melo-trauma — long on plot, short on characters beyond Central Casting. The scent of Panache wafts over the whole story. It’s like watching nail polish dry. By the time the last funeral sequence starts, readers might cringe at the possibility of a sequel.

Switch off the klieg lights. Cue the violins.