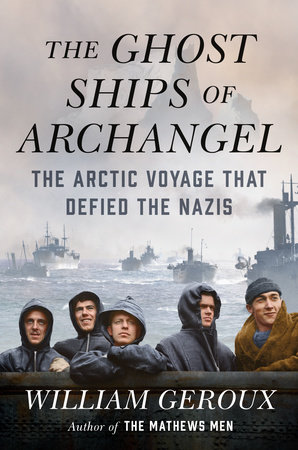 One of the fascinating aspects of World War II is that new chapters keep coming to light. Sometimes this is due to reinterpretation of the received wisdom, and sometimes to the surfacing of previously overlooked aspects. William Geroux’s The Ghost Ships of Archangel, a decades-overdue tribute to the men of the wartime U.S. Merchant Marine, belongs to the latter category.

The merchant mariners provided indispensable support to the Allied war effort, and it is no exaggeration to say the war would have been lost without them. They did this while serving under inconceivably dire conditions, and, not coincidentally, suffered proportionally worse casualties than any of the military branches.

Although President Franklin Roosevelt and General Dwight D. Eisenhower acknowledged their efforts, the “civilian” mariners were effectively written out of World War II history and denied such military benefits as the G.I. Bill.

Geroux has made it his mission to bring these men and their contributions to the fore. His first book, The Mathews Men: Seven Brothers and the War Against Hitler's U-Boats, highlighted the outsized role that a tiny Chesapeake Bay community played in the wartime Merchant Marine. Now he is back with The Ghost Ships of Archangel, a gripping and wonderfully researched tale of intrepid seamen who carried out their mission and defied death with courage and determination.

The backstory of Ghost Ships is the Nazi invasion of the USSR in June 1941, when Roosevelt and British Prime Minister Winston Churchill promised Soviet Premier Josef Stalin an immense quantity of war supplies via sea convoy.

For various reasons, the convoys were routed from Scotland or Iceland to the Arctic city of Murmansk — and then, as Murmansk was bombed to smithereens, to the more remote town of Archangel. The future Ghost Ships were part of convoy PQ-17, which set course for Archangel from Iceland in late June 1942.

The convoys faced multiple dangers, starting with the fact that the ships were rust-buckets plying some of the roughest seas on earth. Crews endured bitter temperatures, dense fog, conditions that defied use of both magnetic compasses and sonar, and a wildly unstable polar ice field. German bombers and U-boats stationed in Norway were constantly on the hunt for the ships. Convoy PQ-17 also faced 24-hour Arctic summer daylight, which made hiding impossible.

Because of such dangers, the merchant ships sailed in convoy. PQ-17 initially consisted of 35 cargo ships (mostly American), escorted by 25 British Royal Navy ships of various types. The voyage at first seemed to go well. Yet, on July 4, 1942, the convoy was stunned to receive an order from London to scatter — just when the ships were at a point most vulnerable to German attack.

The order was from British First Sea Lord Dudley Pound, already hostile to the idea of the Arctic convoys diverting and endangering scarce Royal Navy ships. The tipping point for Pound was when the giant German warship Tirpitz disappeared from its berth in Norway. Convinced that Tirpitz was heading for confrontation with convoy PQ-17 (it was not), Pound made his disastrous decision.

The result was the scattering of “dozens of ill-equipped ships and thousands of frightened men across an utterly unforgiving landscape, with the enemy already upon them,” and much of Geroux’s book details their subsequent fight for survival.

The commanders of four vessels — three cargo ships and a Royal Navy trawler whose captain had defied Pound’s order — determined that the best course was to head for the last place the Germans would look for them: northwards into the deadly ice fields of the Arctic, then onto a roundabout route to Archangel.

These four would become known as the Ghost Ships both because they had been given up for lost when they reached Archangel, and because their crews had painted them a spectral white to blend with the ice. Ultimately, their projected eight-day voyage from Iceland to Archangel would last four weeks.

Throughout the book, Geroux juxtaposes the story of convoy PQ-17 against the geopolitical maelstrom that both engendered and endangered the Arctic convoys. It is irresistible to compare the behavior of the crews — whose bravery and ingenuity were major factors in the miraculously high convoy PQ-17 survival rate — with the frequently ignoble acts of the Allied leaders conducting the war.

Stalin, who was the primary beneficiary of the convoys, was the perpetrator of one of the most brutal and hellish regimes in history (aspects of which were witnessed firsthand by the convoy members who made it to Archangel). Roosevelt, in his eagerness to keep Stalin as an ally, forced the convoys to run during dangerous 24-hour daylight. And Churchill put too much trust in Pound and, to the end of his life, refused to take any responsibility for the fate of convoy PQ-17.

Nevertheless, Geroux concludes that the Arctic convoys were worth the risk, for they were “the Soviets’ main lifeline from the West early in the war, when the Red Army and Soviet industries were on the brink, and Russia’s survival — and possibly Europe’s fate — hung in the balance.”

It is a fitting coda to Geroux’s book that the U.S. House of Representatives recently passed the Merchant Mariners of World War II Congressional Gold Medal Act of 2019 (now pending Senate ratification).

At one point in Ghost Ships, Geroux points out the odd fact that convoy PQ-17 — part of an operation mandated by a U.S. president and crewed mostly by Americans — is “far better known in Britain and Russia than it is in the United States.” Perhaps both the congressional bill and Geroux’s books are signs that a very old wrong is on the way to being righted.