Teens in a seemingly perfect town are rattled by a rash of suicides. 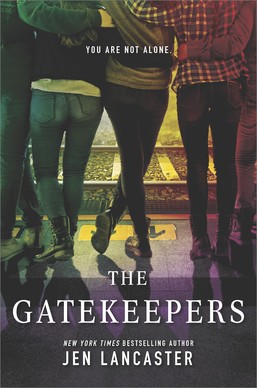 When author Jen Lancaster learned that a friend’s son committed suicide, she said she “had to do something.” The Gatekeepers is the result. This young-adult novel tells of a spate of teen suicides in the fictional community of North Shore, Illinois, and the actions taken by surviving students (the “gatekeepers”) to prevent other classmates from harming themselves.

Mallory, one of the five young narrators, is a blonde homecoming queen obsessed with excellence. She has it all but is still miserable. Anxious about being an ounce overweight, she stays anorexic thin by running stadium stairs even though she hates it.

Lancaster could have made her a “mean girl,” but, thankfully, she veered away from stereotype. Mallory is too cruel to herself to be cruel to others.

Simone (half Indian, half British) is the new girl from London and Mallory’s polar opposite. Like Mallory, she is smart and attractive, but she is also laidback, which doesn’t help her fit in. She would rather craft jewelry with beads and bones than ace the SAT, and that — as Mallory informs her — is not the way it’s done in affluent, status-seeking North Shore.

Owen is part Jewish and a fan of Bob Marley, dreadlocks, “The Breakfast Club,” and pot. He dreams of being a filmmaker and chillin’ in the Caribbean rather than studying at an Ivy League college.

Here, again, the author uses a stereotype for her baseline but does not trap Owen in a forever “dazed and confused” mode. He gets high to escape the relentless pressures of life, but he’s more than just a stoner. His role models are Socrates and Carl Sagan. Like Simone’s father, who is inspired by suburbia to create a work of art titled “Disturbia,” Owen senses that something is deeply wrong with his town in spite of all the riches on display.

Stephen and Kent are the remaining two narrators, nerds obsessed with rap music, physics, M.I.T., and their plans to make a sex robot. Being nerds means they are super smart but not attractive to girls.

If this introduction to the novel and its narrators feels static, that’s because little happens in the plot over the first 150 pages of the book. The characters reveal themselves through conversations and internal monologues, but these are so loaded with pop-culture references to the Kardashians, Tupac, Call of Duty, etc., that the characters feel, at times, like caricatures rather than real people.

The good news for readers is that the action eventually picks up. When a much-loved classmate commits suicide a third of the way into The Gatekeepers, the story gets moving, literally and figuratively. The plot asserts itself, and the characters respond with complex feelings and actions. They become people the reader can care about.

As the novel progresses, Lancaster skillfully juggles the narrators and brings their individual stories under the umbrella of one overarching plot. More importantly, she does what she originally intended. She “does something” to raise awareness about the tragedy of teen suicide.

Through her characters, the author illustrates for readers how young people struggle with anxiety over academics, acceptance by their peers, and dysfunctional relationships with parents. She also shows how they can help each other by being supportive and involved.

Like any good story, The Gatekeepers speaks to the heart. For those with an open one, it also offers hope and useful information.

Alec Hastings is the author of Otter St. Onge and the Bootleggers and Rosie and the Little Folk.