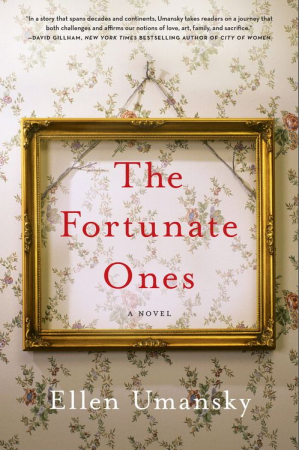 A painting stolen in Nazi-occupied Vienna links two unrelated Jewish families across generations and continents in this novel of love and loss. Shifting across time and place, the families’ stories form a complex and intriguing tale.

Ellen Umansky’s debut novel, The Fortunate Ones, begins in pre-World War II Vienna in a comfortable Jewish household. The painting, “The Bell Hop,” an imagined work by the real-life artist Chaim Soutine, is treasured by Charlotte Zimmer and her daughter, Rose. Lost in the chaos of war, the painting turns up later in the United States where it is sold, only to be stolen again. Rose’s search for it in the early 21st century connects her with Lizzie Goldstein, the daughter of the work’s last owner.

The novel focuses on the trail of the lost painting and the reassuring presence it had provided in the lives of these two women. Rose and her brother survive the war because their parents sent them to safety in England via a kindertransport. Their parents do not, and Rose inherits a lifelong anguish from which she never fully recovers.

We meet Lizzie on the day of her adored father’s funeral. He raised her and her sister on his own after their mother, his divorced wife, died years before. While Lizzie’s privileged life may seem easy, she too faces profound tragedy.

Both Rose and Lizzie are forced by loss into situations demanding that they assume adult roles prematurely. They each surmount difficult challenges with far-reaching consequences. How they lead their lives in the face of unfathomable sorrow, and the comforting role the painting plays for each of them, forms the framework of this engrossing story.

“Losing the Soutine was the least of it,” Rose says, adding later, “How in the world can you protect that which you love?”

When I consider the novel’s scope and the range of emotions it evokes, I am surprised to realize all that was achieved in a mere 336 pages. The writing is taut without being severe. At one point, Umansky describes a picture of an elephant in a room as painted with “gorgeously rendered specificity.”

That phrase might as well describe the writing in this book. The references to people, places, things, and movies anchor the story in space and time. The restrictions placed on Jews under the Nazis are vivid, as are other recent and more pleasant details. Remember aerograms? The movie “Intermezzo”? The 60s song about a beautiful balloon?

Like the best historical fiction, this novel is ripe with intriguing facts. We can learn about what a porcelain kachelofen is, or a “ZBT brother.” My favorite is the notion that the Declaration of Independence is written in iambic pentameter: “We hold | these truths | to be| self-ev | ident.” A revelation.

Hard-won wisdom is scattered throughout the book. Umansky writes: “Sometimes making such a mistake — an irrevocable mistake, with true repercussions — is what makes you change.” And “there is more you could find out. But you have to want to know.”

Lastly, this commentary on Robert Frost’s “The Road Not Taken”: “You must make decisions with incomplete information, with what you know at hand. That’s the way life works. Even if it’s paltry…That’s what the speaker is sighing over, years later. He had to convince himself that one was better. But he had no idea which road to take. This is the lesson. You must pick. Stop your hand-wringing. You must decide.”

I thought I did not want to know more about the Holocaust because I am loath to dwell on its extreme example of humanity’s capacity for evil. Yet I am glad to have read The Fortunate Ones. In addition to its exquisite exploration of how loss is inevitable in our lives and of what it means to be fortunate, this novel honors profound courage: the courage to leap open-armed and empty-handed into the future while trusting in the possibility of love.

Ann McClellan is a Washington, DC, author. Her newest book, Bonsai and Penjing, Ambassadors of Peace & Beauty, published in October 2016, joins her previous books The Cherry Blossom Festival, Sakura Celebration and National Geographic’s Cherry Blossoms. Her fiction work-in-progress is set in Renaissance France at the time of legendary King François 1.

Life of David Hockney: A Novel

This melodramatic, fictionalized biography drew praise from its real-life subject.