The Day I Died: A Novel

This psychological thriller unravels the mystery of a disappearance and the inner-workings of one woman’s mind. 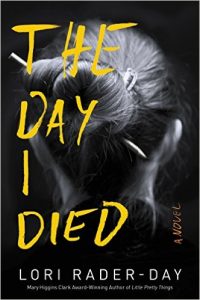 Merriam-Webster defines a savant as “one with a detailed knowledge in some specified field.” But I wonder if the presence of one such idiosyncratic and highly specialized ability in a person implies, perhaps, the absence of other critical abilities.

It is between this juxtaposition that Lori Rader-Day, in The Day I Died, places the reader squarely in the life of Anna Winger, a handwriting analyst/savant. This first-person narrative, part psychological exploration, part detective mystery, and part thriller, is an entertaining read.

Anna and her 13-year-old son, Joshua, have recently moved to Parks County, Indiana, to an apartment with “old wallpaper with black freckles of mold,” accommodations more like a motel room for transients. Indeed, we begin to understand the county is but one stop in Anna’s life story.

Because of her documented successes in the past, Anna is subcontracted as a handwriting analyst from the FBI to Sheriff Russ Keller in the search for missing 2-year-old Aidan Ransey and the murderer of his babysitter, Charity. Suspicions abound about the Ransey family and its estranged if not dysfunctional relatives. And Keller has run out of typical policing approaches.

Rader-Day characterizes Anna’s taut internal life using several layers. One is her relationship with Joshua, a blossoming adolescent who, in the typical and developmental requirements of growing up, rebels against his mother.

Anna feels distress over her son’s rebellion, particularly the ways in which it mirrors her own. This would be tolerable if not for the ever-emerging hints that all is really not right with both of them. “Sometimes he pushed me to a raw anger that made me almost understand things I’d never understood, and the heat would rush away, replaced by emptiness.”

Then Joshua runs away, both metaphorically and literally: “This boy was a ghost boy, and my son had vanished. Joshua was missing, just as gone as the little boy Sheriff Keller was looking for.” Thus begins the parallel stories of mother and son and of father and daughter.

Another layer involves Anna’s ambivalent relationship with Sheriff Keller. Their exchanges are fraught with personal danger and vulnerability, along with an almost keening need for connection.

This tension plays against Anna’s judgmental independence and arm’s-length negotiation of relationships. For instance, given the choice between taking a full elevator or the stairs to Keller’s office, Anna states, “Best of all, [the stairs] were empty of people, empty of pleasantries given and expected in return.”

Anna’s distance from others is the yeasty element, the emotional dissonance that pushes us forward through the story. She is safest in the almost mystical science of handwriting analysis, through which she understands people without ever having to know them.

We learn then about a journey that spans Illinois, Tennessee, Kentucky, and Pennsylvania over the years. Her emotional journey, by contrast, is stuck at the point of origin somewhere in Wisconsin near Sweetheart Lake.

Rader-Day reveals glimpses of Anna’s past by a kind of visual impressionism of puzzle pieces or “shards of memory.” Even as she exposes these complicated layers about her son, the sheriff, and her history, we find that her past is reflected in a haunting present in the case of missing Aidan. Her search for him is clearly (and a bit obviously) a search for her own son and for herself.

The intertwined search for Joshua and Aidan takes Anna back to Sweetheart Lake. “The town I remembered was here, and not here. I could see both at the same time, the ghost and the actual.” It is there in her search that Anna says, “I had to find Joshua. I had to find Aidan. I had to find a way to start over.”

While there are quite a number of two-dimensional characters, Rader-Day focuses on Anna’s quest to discover her identity, to connect with others, and ultimately, to find hope. Still, we seem to plod at times alongside Anna’s ever-weightier journey through somewhat contrived coincidences.

On one level, this is a trip with predictable outcomes and resolution; she achieves a measure of redemption and self-discovery on her day of transformation. There is not a horse, nor a sunset. But there is a boy, a sheriff, and an SUV.

The plot, in the end, does not quite measure up to Rader-Day’s talents as a writer. Her stylistic invention, her emotional perceptions, and Anna’s character development carry the real weight of the narrative. It’s the author’s full-throated commitment to her protagonist that makes The Day I Died a mostly persuasive read.