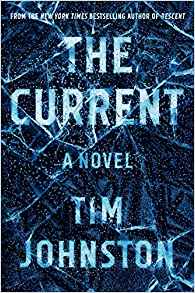 Tim Johnston’s gripping second novel is much more than a skillfully constructed, beautifully written whodunit. It’s a subtle and lyrical acclamation of the heart and spirit of small-town America.

The Current is not your conventional, frenetically paced page-turner, although it smolders with a brooding, slow-burn tension that nudges the reader forward, catching you up in the lives of the troubled solitaries at the book’s core.

Beneath its mystery-novel trappings — wielded with consummate mastery by the author — The Current is also a novel about the haunting persistence of memory.

The mystery itself originates in a horrid present-day tragedy with chilling parallels to the unsolved murder of a teenaged girl some 10 years earlier. It centers on Audrey Sutter, a college student and survivor of the mishap.

A winter road trip sets the tale in motion. Two young women, students at a Southern university, set out on a journey north. Their destination: Minnesota, where Audrey can visit her father, lately diagnosed with cancer. Caroline Price, Audrey’s friend, has volunteered to drive.

In Iowa, a few hours before dawn and close to the Minnesota border, two men assault Audrey in a gas station restroom. The women fight off the attack and flee in Caroline’s car. A mile or two up the road, about to cross a frozen river, they’re sideswiped. Then, nudged from behind, their car slides down the bank and onto the ice, which gives way, plunging them into the water. Caroline is killed. Audrey, her arm broken, is swept downstream under the ice, but survives.

If this were a conventional amateur-turned-detective mystery, it might be Audrey’s story alone. She struggles to recover, absorbs the death of her father, a retired sheriff, and ultimately sets out to discover the truth behind her accident and the earlier murder.

But author Johnston has broadened the frame, in grimly evocative style, to embrace a circle of other townspeople, each of them still tethered to the past by connection to the earlier crime. Some bereaved, others abandoned, they brood over lost loved ones, their lives stalled in memories. Their perspectives flow into the narrative stream, skillfully integrated with Audrey’s quest through alternating third-person-POV chapters.

A lonely undertone pervades this collective saga as it creeps along, charged with foreboding, like a soundless fire in a coal seam. Through all this, the author’s abiding respect for the underlying, if flawed, decency of rural America glows.

In the final third of the novel, the grim momentum of Audrey’s quest begins to point at the truth. She soldiers on in her compulsion to set things right, clinging to tokens of her dead father. She takes on his battered sheriff’s coat, his watch, and sunglasses as she sets out on what becomes a dangerous quest to solve the cold-case murder he failed to close.

But Audrey is no brisk and perky gal sleuth; there’s something foolhardy — almost catatonically so — in her drive to uncover the truth. Scarcely recovered from a near drowning, plaster cast on her arm, she pushes on, hearing the persistent voices of the dead — that of her father, of Caroline, of the murdered young woman a decade before.

The popular conventions of the amateur-detective genre demand that the plucky heroine go on to finger all transgressors, to resolve all the crimes on her plate. Here, counter to type, The Current closes on an event that largely — though somewhat incompletely — can soothe the restless loneliness of the principals.

The reader may yearn for more, but the river flows on, yielding only one secret at a time.