The Crimson Thread: A Novel

A riveting tale of courage, love, and betrayal in Crete during WWII. 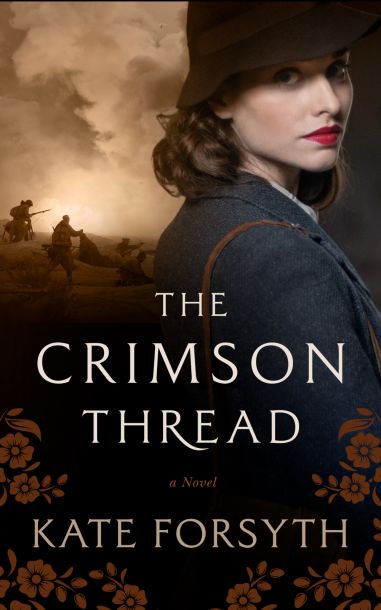 Kate Forsyth’s work has mostly featured fantasy and adaptations of fairytales. In The Crimson Thread, she makes a successful foray into historical fiction, albeit infused with Greek myth. Forsyth has crafted here a colorful mosaic of settings rich with scenic splendor, local color, and memorable characters. A love story gradually unfolds, too, lightening everyday harsh reality. As in all good romances, the winner of the lady’s heart is predictable but satisfying.

The book opens in April 1941 with Alenka, a young Cretan woman, embroidering her trousseau in tiny red stitches. The thread reminds Alenka of her late grandmother Yia-Yia telling her the story of the Minotaur, their local mythos. Alenka spent her childhood playing in the Palace of Knossos ruins — thought to be the site of the creature’s labyrinth — absorbing the stories of the archeologists, typing up their reports when she grew older, and eventually becoming fluent in English. She now works as a translator and guide for the curator of the archeological dig, who lives in the Ariadne Villa on the palace grounds.

Teddy Lloyd and Jack Hawke, best friends since childhood, are Australian infantrymen who see action in Libya before being deployed to Greece, where they expect to fight the Italians. Hitler decides that Il Duce needs assistance, however. Soon, the Germans begin their invasion, which the Allies cannot repel, causing the two men to evacuate to Crete. Teddy has been drafted to guard the king of the Hellenes and his prime minister at the Villa Ariadne. Jack, who stutters, studied Classics at university and is elated to be selected to serve with a resistance team in Heraklion, Crete’s capital.

One day, Teddy comes across the beautiful Alenka in the villa’s garden. He flirts with her too boldly — unacceptable in her culture. Still, he is determined to seduce her. Jack, meanwhile, studies assiduously to improve his modern Greek and, while traveling to Knossos to tour the palace ruins, also meets Alenka. He finds her enchanting. For her part, Alenka want nothing to do with either of them.

Then the Nazis invade Crete in a sudden and massive blitzkrieg. The king is whisked away to travel by mule over the mountains to the south coast for evacuation. Teddy is deathly afraid of heights but can hardly refuse to accompany the monarch. The group suffers a grueling journey before reaching a high ridge from where “the ground fell away in a series of sheer cliffs to the floor of a gorge hundreds of feet below.”

The big guns will have to be left behind, but Teddy has a better idea. “I’ll take them back. They’ll be needing them for the fight.” Besides, he has unfinished business with Alenka, who has thus far recoiled from his every advance.

A Nazi general is now installed in the Villa Ariadne, setting in motion the usual atrocities, which Forsyth presents with strong but restrained imagery as the monster demands the blood of Cretan youth again and again. Jack and Teddy are stranded on the island along with many other soldiers and expats. They assist the resistance wherever they can, despite their growing tensions over Alenka. (“I saw her first,” says Teddy, claiming her as his.) Alenka, now a member of the resistance, hides Jack and Teddy from the Nazis, guiding them from one bolt-hole to another.

A major complication for everyone is Alenka’s teenage brother, Axel, who is half German. Neglected by their mother and bullied at school, he grew up consumed with hatred and is ecstatic when the Germans land. He even spies on his sister and has no compunction about betraying her to the Nazis once he thinks he has sufficient proof of her resistance work.

Teddy is increasingly frustrated by Alenka’s rebuffs and enraged when he suspects she might favor Jack. The rift between the men becomes dangerous, leaving Alenka to soothe Teddy’s outrage, as well as suffer Axel’s progressively more violent behavior. From the outset, we see that Teddy is somewhat manipulative and Jack introverted and bookish. Their four-year period of hardship and danger leads them to choose different paths as they mature into their true selves.

Bookstores are awash in novels depicting the depredations of Nazi occupation in various European countries, but Greece’s travails rarely appear in fiction — the Cretan experience, hardly ever. This makes the wide-ranging and suspenseful The Crimson Thread all the more interesting and oddly timely. The way it highlights the courage and determination of Cretans in fighting the enemy brings to mind the stalwart resolve of Ukrainians bravely doing the same today.

D.A. Spruzen is author of The Blitz Business.