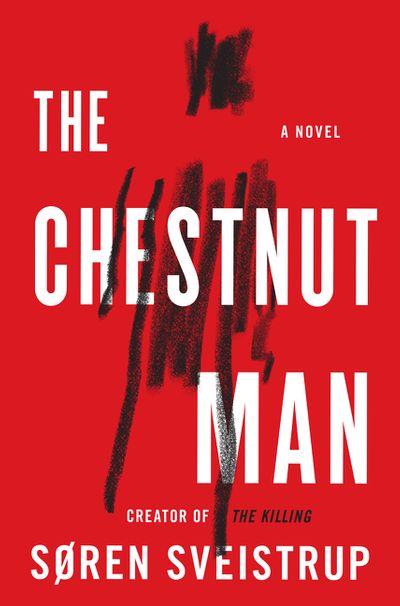 The Danish like their herring. Indeed, Copenhagen was a city built on herring. (Not the actual fish, of course, but the revenue it generates.) Which brings us to The Chestnut Man, a mystery which has schools of herring, of the red variety. The book is so chockfull of them that it seemed half of Copenhagen (population 777, 218) might be guilty of the brutal crimes detailed therein.

(I did identify someone I thought so unlikely that I made the character my chief suspect. And, voila, I was right! I may take that strategy to the racetrack.)

The author of The Chestnut Man is Søren Sveistrup, a Danish scriptwriter and film producer, perhaps best known on this side of the Atlantic for the AMC television series “The Killing,” which was adapted from a Danish TV series (and sold to more than a hundred countries). The HarperCollins publicists claim that Sveistrup may be the next Stieg Larsson (Swedish author of The Girl With the Dragon Tattoo trilogy) or Jo Nesbø (Norwegian author of the great Harry Hole mysteries).

Not that Sveistrup is a bad writer. He is a very good writer. The Chestnut Man is heavily researched and replete with juicy details of murders, dismemberments, forensic science, and the like. One gets the impression that Nordic police work is the same as police work the world over. Except colder, with many descriptions of cops freezing their chestnuts off.

Sveistrup’s protagonists are detective Naia Thulin and her reluctant partner, Mark Hess, a detective who apparently disgraced himself while on assignment with Interpol and who is now an unwelcome presence among Copenhagen’s finest.

However, except for Thulin, Copenhagen’s finest leave a lot to be desired, from the chief on down. They are a backbiting lot who may have screwed up the kidnapping and presumed murder of the 12-year-old daughter of Rosa Hartung, the city’s Minister for Social Affairs. It seems that the girl’s fingerprints are on the toy chestnut figures that turn up at current murder scenes. That’s certainly a perplexing clue, considering that a man confessed to killing her a year earlier.

Hess may be disgraced, but he is a dogged investigator and believes something smells to high herring. Thulin doesn’t like or trust Hess initially but suspects that his instincts are spot-on in their hunt for the murderer who leaves behind the wooden toys.

That hunt is the centerpiece of The Chestnut Man, but there are so many blind alleys and tangential crimes, it is easy to forget that. In fact, most of the suspects mentioned early on are guilty of horrible deeds not related to the “Chestnut Man,” as the media dubs him. Many of them get their comeuppance, but I couldn’t help feeling that either Sveistrup is exaggerating Denmark’s rottenness, or Copenhagen should be avoided entirely.

I’m pretty sure it’s the former, and I think I know why. Sveistrup has written a novel that will make a great screenplay for the TV series that he plans. If each creep he writes about in The Chestnut Man gets a one-hour episode, the show will run for years.

Although it feels padded in spots, The Chestnut Man is a hard book to put down, because there is basically a new suspect every couple of chapters. And, from the first pages, a reader wants to find out if Rosa Hartung’s child is still alive.

Thulin and Hess (like most of the major characters) are not really developed to the point where we care deeply about them. And the novel’s resolution is ambiguous. Sveistrup says that is intentional, “because there really isn’t some final peace at the end of a manuscript.”

As I said, The Chestnut Man will be perfect for TV.

Lawrence De Maria has recently published his 20th novel, Alas, Paris, about a plot to blow up the Louvre and most of the City of Light. Like its predecessors, it is available on Amazon in both e-book and print versions.

A satire of post-9/11 national security stirs empathy, but not outrage.