The Case of the Married Woman: Caroline Norton and Her Fight for Justice for Women

A discarded wife demands equal protection under the law. 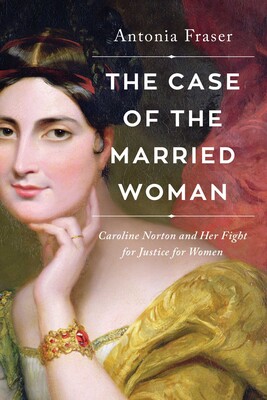 Our fascination with celebrity love triangles and resulting divorces hasn’t changed much in nearly 200 years. In 2005, there was Jennifer Aniston — Angelina Jolie — and Brad Pitt, and before that, in 1964, the public couldn’t get enough of the Liz Taylor — Richard Burton — and Eddie Fisher marital breakup. Back in 1836, it was Caroline Norton — Lord Melbourne — and George Norton who set tongues wagging.

Caroline Sheridan Norton was the granddaughter of playwright Richard Brinsley Sheridan (“The Rivals,” “The School for Scandal”), who, in 1827, married George Norton, a lawyer, a Tory member of Parliament, and a wife-beater. Lord Melbourne was the Whig prime minister whose flirtation — and maybe more — with Norton led to the breakup of her marriage, the loss of her children, and her transformation from society maven to radical activist. Today’s divorced women who win custody of their children have Norton, in large part, to thank. They should thank her, too, for the ability to get divorced in the first place.

Antonia Fraser’s The Case of the Married Woman: Caroline Norton and Her Fight for Justice for Women chronicles her heroine’s metamorphosis from society’s darling to its outcast. In doing so, the author shines a light on the injustices suffered by early-19th-century married women who strayed or were believed to have strayed. Having already lost their identities and legal rights by getting married, women lost their children with separation and divorce. Although slow-moving at times and filled with long-ago British politicians whose names are not widely known, the book will make modern women’s blood boil.

As Norton’s wife, Caroline was the center of attention at her salon in their home at 2 Storey’s Gate, just steps away from 10 Downing Street and Parliament. Painter Benjamin Robert Haydon described her as “a Greek statue breaking into life.” Benjamin Disraeli was besotted by her skill at storytelling and by her beautiful eyelashes. She counted among her friends and salon visitors the actress and writer Fanny Kemble, Frankenstein author Mary Shelley, and King Leopold of Belgium. (Said Shelley, “Had I been a man I should certainly have fallen in love with her.”)

While entertaining the A-list of the pre-Victorian era, the witty and lovely Caroline gave birth to three sons and earned her own living (although, legally, the money belonged to her husband) as a poet, novelist, and magazine writer. Despite her busy life, by all accounts, she was an excellent and devoted mother.

Lord Melbourne, a widower, was three decades older than the 20-something Caroline when he began calling on her, initially at her behest to help her husband become a magistrate after he lost an election. Frequent visits, flirtatious letters on both sides, and rumors followed. Eventually, in 1836, Mr. Norton had had enough. He took their sons to live with his sister and filed a lawsuit against Melbourne for Criminal Conversion (adultery), seeking £10,000 or what today is close to $1 million.

As the named object of Melbourne’s affections, Caroline was neither represented by counsel nor permitted to defend her honor in court. The suit was a financial one between her husband and “the other man” for Caroline’s diminished value as a wife. As men have done for ages, Melbourne backed away from her after the lawsuit was filed and his own political position was threatened. “All I shall say is, worse women have been better stood by,” Caroline chided him in a letter shortly after the lawsuit became public.

The trial, which began on June 22, 1836, was like most throughout history that promise sex and scandal — this one involving a sitting prime minister, no less: a public circus. Crowds of the curious waited outside the Court of Common Pleas hours before the doors opened, and spaces in the galleries sold for what would today be close to $600 a seat. Charles Dickens covered the proceedings as a newspaper reporter.

Ultimately, the jury of 12 men found the prime minister innocent of any adulterous acts with Caroline. His nightmare over, the PM could go back to running the country in peace and become more popular than ever. With the coronation the following year of the teenage Queen Victoria, Melbourne became a trusted advisor at the royal court. But for the equally innocent Caroline Norton, the nightmare was never-ending; she was socially ostracized, and even worse, her husband had no intention of returning their children to her.

Thus began Caroline’s campaign for herself — and other women in her situation — to maintain rights to their children after separation (legal divorce at the time was available only to the well-connected through individual acts of Parliament). First, she used her skills as a writer to pen pamphlets advocating that young children stay in their mothers’ care after separation and that courts, not fathers, determine where older children should be placed.

Then, she partnered with Serjeant Thomas Talfourd, Melbourne’s defense lawyer in the adultery suit and an MP, who introduced legislation in the House of Commons which would do just that. After two failed attempts, the bill finally passed, and Queen Victoria signed it into law.

The Custody of Infants Act of 1839, as the law came to be known, was landmark legislation. It codified the so-called “tender years” presumption, in which children up to age 7 remain with their mothers after separation, and was a fundamental tenet of child-custody law in England and the United States until well into the 20th century.

Then it fell into disfavor here as a violation of the Equal Protection Clause. Today, courts make custody determinations based on which parent would act in the child’s best interests, with no focus on parents’ gender. Additionally, unless domestic violence is present, the modern legal landscape favors joint custody.

Sadly, despite helping other women retain their children, Caroline did not get her own sons back until after one of them died tragically from a fall off his pony. At that point, her husband may have realized he needed her help raising them. By then, she had been apart from her boys for seven years.

Caroline’s cause did not end there. She took to lobbying MP William Gladstone for legislation that would allow married women to own property and retain all the legal protections afforded to single women. She published works decrying domestic violence and through them helped influence the passage of the Matrimonial Causes Act of 1857 that liberalized the country’s divorce laws.

In 1834, Parliament caught fire and burned to the ground. Daniel Maclise, an artist known for historical subjects, was commissioned to paint a mural symbolizing “Justice” on the walls of the reconstructed building. In 1850, he painted a larger-than-life picture measuring eight feet high. Justice is represented by an imposing woman with dark hair and deep, intelligent eyes wearing Grecian robes and holding scales in one of her hands. She is surrounded by the figures of an emancipated slave and a grieving woman with two small children.

To this day, the painting can be seen in the House of Lords, facing the entrance to the House of Commons. The woman whose likeness Maclise chose to represent Justice was none other than Caroline Norton, indeed “a Greek statue breaking into life.”