The Bone Clocks: A Novel

A teenage runaway is drawn into a mysterious contest between good and evil in this labyrinthine tale. 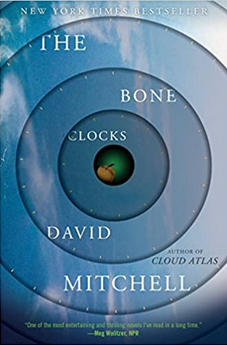 A labyrinth requires more than just a way out. It depends upon the twists and turns of its misleading passages in order to form a unified whole. Without that complication, the labyrinth would devolve into merely a winding path.

Fifteen-year-old Holly Sykes thinks, at the beginning of David Mitchell’s latest fabulous novel, that she is about to embark on a straightforward journey out of her childhood home and into the arms of her 24-year-old lover. But while she is packing in a fit of pique, her kid brother surprises her with a gift: a maze that he drew on a circle of cardboard.

“It’s diabolical,” he says, and he makes Holly promise that she will memorize it.

As if her little brother had foreseen it, Holly’s journey soon becomes far more twisted — and treacherous — than she had anticipated. Her lover turns out to be, not surprisingly, a slime ball, and no haven for her. But, committed to her exodus, Holly treks out of her small English town along the Thames anyway, and she soon encounters an old woman fishing. Parched, Holly asks for a drink, which the woman gives her in exchange for a strange promise.

Two intriguing promises in, it is clear that this novel will have a few mysteries to solve. And the mysteries pile up when Holly reveals that, as a child, she heard strange voices and hosted, or imagined, a sweet-voiced nighttime visitor who may or may not have caused a classmate to be hit by a van. By the time Holly’s teenage rebellion is concluded, tragedy strikes her family, and her life takes yet another turn.

The Bone Clocks comprises six sections written from different first-person perspectives. Initially, the sections seem disjointed or, at best, only loosely connected. But Mitchell is a master of literary breadcrumb trails, and his stories’ seemingly disparate parts do weave together into a dramatic climax pitting the outgunned forces of good against the powerful agents of tremendous evil. Discovering just who ranks among each of those parties and how the separate sections relate to one another is among the novel’s delights.

Happily, each section is compelling in its own right. We wonder if a callous young man will reform himself for love, and if a journalist father can give up the allure of war reporting to stay home with his daughter. Mitchell must have had particular fun with one section, about an author, where he lampoons both himself and the broader literary community. He amusingly includes an obnoxious young writer who preens at his own humility, something Mitchell has elsewhere admitted to doing himself.

And he teases himself again when another character mocks, “A book can’t be a half-fantasy any more than a woman can be half pregnant.” Mitchell’s books quite often have one foot in realism and the other in fantasy or science fiction.

The Bone Clocks shares more than just genre similarities with Mitchell’s earlier works. Two main characters in this book were secondary characters in previous novels, and many others make cameo or supporting appearances here: Jason Taylor, Luisa Rey, Mo Muntervary, and even the moon gray cat. Mitchell has said he thinks of his books as chapters in a sprawling “macronovel,” and this one may fit that bill even more than the previous ones.

Delight in those multiple, fantastical lives may just be the point. As poet Stephen Dunn has written, “Several tomorrows always linger in the margins” of novels. They offer us the chance to live otherwise while among their pages and we can, while reading, achieve a sort of rebirth and immortality.

This is a novel easily enjoyed without knowledge of any of Mitchell’s earlier books, a testament to his tremendous storytelling. (Remarkable for a man who claims to bore his friends when he talks.) Each twist of this story is gripping, even when the characters’ trails do not lead toward the novel’s resolution.

Similarly, Mitchell does not answer every question, and one of the sections — told by a crotchety, self-absorbed, yet perhaps redeemable narrator — is woven a little loosely into the completed tapestry. That is certainly intentional. A labyrinth, like a life, needs wrong turns and unfinished business.

By the end of her journey, Holly Sykes’ path has taken turns she never could have imagined, and we prosper from her adventures. I suspect, however, that this may not be the last time Mitchell’s readers encounter the fascinating, independent Holly. Her rebirth might only await his next book. Until then, readers will find more than enough to please them in this tremendous, profound novel.

Carrie Callaghan’s short fiction has appeared in Silk Road, the MacGuffin, Weave Magazine, and elsewhere. She is a member of the editorial board of the Washington Independent Review of Books. Twitter: @carriecallaghan.