The Blind Earthworm in the Labyrinth: A Novel

This lush, extravagant tale offers a rare glimpse into the torrid heart of modern Thailand. 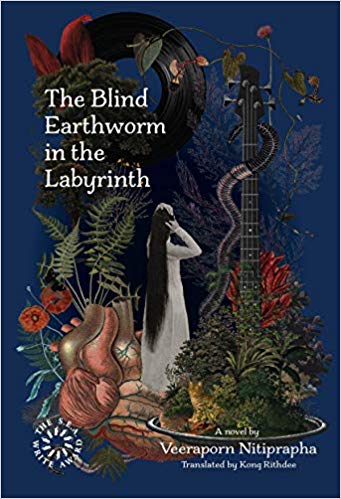 Americans know Thailand as a hedonistic vacationland of sugar-sand beaches, lavishly gilded Buddhist temples, and a libertine nightlife where anything goes. But what most Americans don’t know is that the country has a vibrant literary history that goes back centuries. This may be because so few Thai works have been translated into English.

Fortunately, Veeraporn Nitiprapha’s 2015 S.E.A. Write Award-winning novel, The Blind Earthworm in the Labyrinth, has just been elegantly translated into English by Kong Rithdee. Rich with mythical imagery, the story plunges the reader into a contemporary Thai life strongly influenced by Western culture while steeped in timeless traditions and Buddhist thought, and roiled by decades of political dissent.

On the day that Chareeya is born, her mother learns that her husband has been having an affair. After the father agrees to give up his lover, he “quit the entire world.” From then on, their house in a quiet village on the banks of the Nakhon Chai Si River is “conquered by silence” and despair.

With a father “whose inability to have contact with other human beings was absolute” and a mother “who kept her distance,” Chareeya and her older sister, Chalika, grow up in an isolated world of make-believe.

Chalika loses herself in cheap romance novels, while Chareeya’s active imagination has her searching for the relics of an “ancient city buried beneath the riverbanks,” and communing with her “chlorophyllous clan” of garden trees.

When the girls are still young, their parents die of heartbreak and longing, and they are raised by Uncle Thanit, who teaches them to love classical music and international cuisine. One day, their neighbor Pran, another child whose family life is disrupted by infidelity, saves Chareeya from drowning; from that moment, their fates are intertwined.

Or have they always been intertwined? After Pran pulls her from the water, Chareeya “remembered and didn’t remember that she had met him before, if not here in this life then somewhere else, in some other life.”

Like the elaborate murals of the Suthat Temple that Chareeya and Pran have visited together since childhood, the novel teems with stories that beget stories that refer back to earlier stories, every sentence adding yet another arresting detail to the intricate backgrounds of characters both major and minor.

Incidents that happened generations ago have a ripple effect, the past conspiring to preordain the future, the tragic outcome of our star-crossed lovers foretold in their parents’ and their parents’ parents’ stories.

After several years of estrangement, Chareeya and Pran reconnect in Bangkok, the “city of broken dreams,” where she works as an employee in a record store, and he gets by as a rock musician. They spend lazy Sundays together, Chareeya preparing elaborate meals, such as:

Ah, the garden. In the yard of her small Bangkok house, Chareeya has coaxed forth a lush, tropical oasis. The author has appended an index of the many plants that appear in the book, listing their Thai, English, and Latin names (she also includes a playlist of the songs that are important to the lovers’ story). Like the Garden of Eden, there is the hint of the magical about her home, so beautiful and perfect that the reader knows — humans being humans — it cannot last.

Chareeya has been unlucky in love, starting with her first boyfriend, a Marxist agitator who eventually dumps her because she’s not woke enough. As her sister stays in their haunted childhood home reading romance novels, Chareeya lives the life of one of those novels’ heroines. And she almost gets her happy ending when she and Pran finally consummate their deep love.

But already it’s too late.

In “a desperate search to find Chareeya inside Chalika,” Pran has fallen into bed with the elder sister. And Chareeya is entangled with Natee, a grifter who pretends to be a war correspondent but who is really just a layabout living off his (other) girlfriend. As in a soap opera, there is no happy ending. Indeed, there is no ending at all, but instead a permanent questing for a happiness that is just beyond everyone’s reach in a cycle without surcease.

The translator has done a masterful job of capturing the author’s sumptuous prose, each sentence unfurling like a brightly dyed bolt of silk. Despite a doomed sense of a tragedy foretold, the story is a celebration of life that engages all the senses, redolent with food and music, fecund with the splendor of nature, opulent with life, as one story uncovers another story and on into infinity.

Surfacing throughout the text are references to another seemingly endless cycle, this one political. Thailand was an absolute monarchy until 1932; the first coup occurred in 1933, the latest in 2014. Political oppression begets civil activism, which begets political oppression.

Chareeya’s first love transforms from a Che Guevara-beret-wearing Marxist with a “passion for justice” to a right-wing politician who “threw his weight behind another violent crackdown against democracy protestors who had taken to the streets.” This is the one tale for which the omniscient narrator cannot tell the end.

With only a passing familiarity of Thai history and culture, I suspect there were many allusions in this extravagantly constructed novel that I did not catch. But I savored this rare glimpse into the torrid heart of modern Thai life, and look forward to reading more works emerging from Thailand’s thriving literary scene.

A complex portrait of what it means to get close.

Hell of a Book