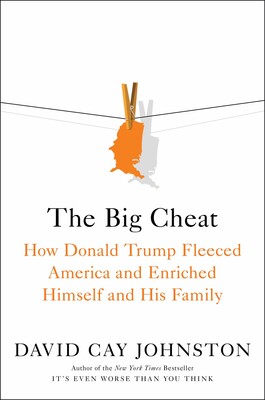 Who needs to know any more about the misdeeds of Donald Trump? If he already sickens or enrages you, you don’t require further evidence of his villainy. If you’re a fan, nothing you learn about him now will likely shake your loyalty. Yet books keep pouring forth detailing unethical, immoral, and illegal actions of our most recent former president. Unless you’re one of the prosecutors apparently preparing charges against him, it seems like overkill.

David Cay Johnston has added to the deluge with The Big Cheat: How Donald Trump Fleeced America and Enriched Himself and His Family. It’s the final entry in a trilogy; The Making of Donald Trump was published in the midst of the disorienting 2016 presidential campaign, and It’s Even Worse Than You Think: What the Trump Administration Is Doing to America chronicled Trump’s first chaotic year in office.

Johnston, a former New York Times reporter who now runs his own investigative website, has more than an ordinary right to pile on. Winner of a Pulitzer Prize for revealing inequities in the federal tax code that favor the wealthy, he’s an expert in a central subspecialty of Trumpology: how Donald, his family, and associates dodge taxes.

Trump broke with four decades of presidential precedent by refusing to release his returns. This understandably led to fevered speculation about what he was hiding. Early in the administration, Johnston obtained and released Trump’s 2005 Form 1040 on his site and on “The Rachel Maddow Show.” Though a bit anticlimactic — by his own admission, there was “no smoking gun” — still it contained some important information about how the superrich pare down their tax obligations.

(I later relied, in part, on Johnston’s Trump-related tax work in a report I wrote advocating that Congress obtain the president’s returns.)

Taxes — though not Trump’s personal returns — play a big role in this book. Johnston devotes several chapters to the unfulfilled promises of the 2017 Republican tax overhaul, the singular legislative achievement of the Trump Administration. There’s not a lot new here for anyone like me who’s spent time promoting the same information, but for the vast majority of readers with other daily pursuits, Johnston offers what may be eye-opening revelations.

For instance, despite the president’s many heartfelt avowals of self-sacrifice, the new tax law — surprise! — likely saved Trump a lot of money. (Again, we don’t know for sure because most of his personal tax information is still secret.) Also, in direct contradiction of Trump’s self-declared mission to preserve and bring back American jobs, the GOP law actually rewards big corporations for moving profits and production offshore.

Johnston breaks down one such offshoring scheme perpetrated by a lesser-known Koch brother. William Koch, younger sibling of the more politically active Charles and David, was able to dodge taxes on the overseas sale of a noxious fuel outlawed in this country by channeling revenues through enough foreign offices to make the earnings essentially stateless.

Johnston offers several “Trump Toppers,” my term for those instances of Trump chutzpah cresting sufficiently above his standard level of shamelessness to catch your attention. Examples: the crowd at his kickoff press conference in 2015 was composed mostly of actors, and the loans meant to keep Main Street businesses afloat during the pandemic were tailored specifically to most benefit big-time hospitality-business owners like Trump himself.

Johnston is an energetic writer, but the text is not carefully constructed — it has the repetitive, unfocused feeling of a first draft. One chapter seems to contain two versions of the same story, as if someone had forgotten to delete one of them.

What’s more important in this time of national danger is getting out and talking to people who don’t already agree with you. While knocking on doors in North Carolina and Georgia this past election season, whenever I ran into a Trump backer, I tried to find common ground. Even if I didn’t convert anyone, I hope that my respectful attitude at least dulled their fury at the statist monster they believe Trump was sent here to slay.

To be fair, Johnston finishes up with a set of fixes to prevent further large-scale public larceny. Gratifying to this fellow tax-fairness agitator, he begins with a requirement that future presidents and presidential candidates release multiple years of tax returns. Other proposed reforms include making certain financial crimes explicitly impeachable and strengthening safeguards against self-dealing.

Of course, the record of all this misbehavior should be carefully preserved as a shield against it happening again. I just hope the resulting narrative creates in the reader a feeling of enhanced vigilance and not overwhelmed apathy.

William Rice is a writer for political and policy-advocacy organizations.