The hunt for a beautiful and deadly WWII sniper thrills in this historical serial. 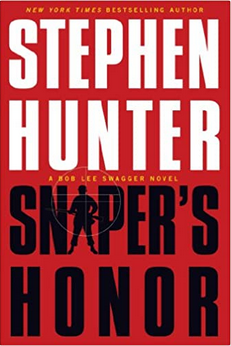 In a novel that sweeps from the World War II Eastern Front to the present-day War on Terror, Stephen Hunter offers up the latest installment in his Bob Lee Swagger thriller series, Sniper’s Honor. Swagger — a Vietnam veteran sniper — teams with his old friend Kathy Reilly to unearth the story of a deadly and beautiful Russian sniper, Ludmilla “Mili” Petrova. A fictional character, Petrova stands in for the real-world female Soviet snipers who fought the German invasion.

Despite racking up enough kills to earn the nickname “White Witch,” Petrova has disappeared from the historical record. This disappearance intrigues Reilly, a correspondent for The Washington Post. Stalin’s government loved to portray women snipers as heroes, so why not glorify one so photogenic? How had she earned the ire of the Kremlin, and what sort of end had she met?

Sensing a great feature story, Reilly emails Swagger to ask about the Mosin-Nagant 91, a weapon Mili would have used. The opening question brings Swagger into a journey far more dangerous than a historical fact-finding trip; there are people who don’t want this 70-year-old mystery solved.

As always, Hunter provides rich and accurate details about weaponry, but you don’t need to care about guns to enjoy the novel. Like any good fiction, Sniper’s Honor presents a compelling conflict involving well-drawn characters, with writing that’s artful on a sentence-by-sentence basis. Consider Hunter’s description of the scene of a tank battle in the Ukraine:

“They were on a plain under a dome of sky. All was flatness. It was an infinity of flatness under the towering clouds of the Ukrainian sky. It was a battle reduced to its essential elements with no distractions, almost an abstraction: the existential flatness of the plain to the horizon, the vaulting blue arch of cloud-filled sky, the sense of tininess of men and machines on this construction that only a mad god could have invented. The tanks lurched ahead.”

Another characteristic of Hunter’s writing is his ability to freeze a moment and draw a word picture of everything that happens within the span of a second or two. At one point, he takes a couple of pages to describe the flight of a bullet from a rifle barrel to — and into — a bad guy. The images become quite graphic, but you bear with it because the target so richly deserves his fate:

“The bullet struck him on a lateral transective angle approximately six inches below his left ear, that is, a bit lower than the root of his neck on the torso, a little in front of the medial line of the shoulder, issuing a sound that reminded those nearby of a crowbar slamming into a side of beef.”

In a few places, Hunter makes liberal use of artistic license. For example, in a particularly tight spot, Swagger and Reilly defend themselves with World War II weapons and ammunition they found in a waterproof container, inside a cave. And the stuff still works. Well…okay, it’s possible. The author weaves a good enough story that he gets away with it.

Also, as Swagger surveys the terrain where Mili worked seven decades ago, he seems to read her mind. He actually finds the boulder where she sighted in an Enfield rifle dropped by a British plane. Yeah, snipers think alike, but maybe this is a bit of a stretch. Yet it works. By the time you get to that point in the novel, you like Swagger and you like Mili, and you buy it.

As a setting and background for Sniper’s Honor, Hunter has chosen a corner of World War II most readers know little about. Like the best of historical novels, this book serves a dual purpose of entertaining and informing. Thriller fans who like guns will love this novel, certainly. But it’s a smart story of guns, worthy of the leisure hours of an intelligent reader who’s never once tripped a trigger.

Tom Young served more than 20 years with the Air National Guard, including deployments during the wars in Iraq and Afghanistan. His novels include The Mullah’s Storm, Silent Enemy, The Renegades, and The Warriors. Young’s newest novel, Sand and Fire, comes out in July.