An expertly crafted, genre-defying YA mystery. 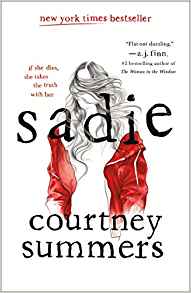 With Sadie, Courtney Summers has served up a deep and satisfying read. Beyond its riveting plot, Sadie is a triumph of innovative storytelling.

As a story, Sadie is many things. First, it is a fascinating mystery rooted in the protagonist’s search for her sister’s killer. Our heroine, Sadie Hunter, is a runaway herself. As one journalist tries to track her down, we follow the clues Sadie leaves behind. We also follow the clues Sadie finds trying to chase down a killer. As in any good mystery, she meets surprises and twists along the way.

It is also a thriller. While the plot does not lead to planet-threatening danger, Sadie’s road-trip-cum-investigation takes her into the worst neighborhoods in America and brings her face-to-face with a variety of dangerous characters intent on keeping their own secrets.

Her search for revenge blossoms into a much bigger mystery than anyone could predict in the deceptively simple beginning of the book. Sadie is not a detective in any way, nor is she a hard-trained action heroine. As in the best of thrillers, this is the story of an ordinary person faced with extraordinary circumstances.

Sadie also reads as a touching coming-of-age tale. The title character begins the book in “a place that’s only good for leaving,” and she is a roiling bundle of emotions with the simplified view of the world any teenager might have. The small town from which she escapes is vividly drawn, and we feel the sense of being trapped in a place everyone seems to want to leave but can’t.

Her journey takes her to Big City America, even darker and uglier than her small-town roots. As the story unfolds, we watch this freckle-faced girl cursed with a serious stutter mature and evolve, like the lead character in any classic quest tale. We come to admire her even as we fear for her ultimate fate.

As much as I enjoyed the plot, it was the narrative approach that made this book shine. For part of the book, Sadie tells her own story in first person. We are inside this young girl’s head and can feel her fears and occasional joys.

Her courage and determination are real, but not the kind we see in action-adventure tales. It is the courage of a girl who feels she has no choice but to continue, to move forward, until she has done what she has committed to do. She practically ignores her lack of resources. The switchblade she stole from one of her mother’s past boyfriends becomes a talisman she often considers using as the solution to an immediate problem.

Sadie’s matter-of-fact narrative alternates with, and stands in counterpoint to, chapters narrated by West McCray, a journalist. McCray is producing a podcast about nothing in particular until he goes to the rural town of Cold Creek and learns of a girl’s grisly death and her runaway sister. He is drawn into the story and shares it with us, his audience, in a series of podcasts.

That’s the brilliance of this novel. McCray is driven by a reporter’s natural curiosity, and he draws insight out of his interview subjects so naturally it’s easy to forget that the entire volume is fiction.

McCray points his microphone at everyone he can find whose life was touched by Sadie. As she flits (or often runs) through people’s lives, she leaves lasting impressions. These interviews provide the real narrative. It gives us the view from the outside in sharp contrast to Sadie’s own view of events.

Again, these voices are authentic. Every one of these interviewed characters is believable as a person, even those who get few words to share, and every one helps to deepen our understanding of Sadie and the world she lives in. In this sense, the book has an almost “true crime” feel, at least the chapters that are McCray’s podcast.

Courtney Summers set out to make her readers consider how far they would go to protect their loved ones. She also wanted us to see the impact that trauma can have on a girl who is on the verge of becoming a woman. She succeeds brilliantly in both goals. Filled with well-delineated characters, a finely tuned plot, and truly marvelous word-craft, Sadie is a book no one should miss.

Austin S. Camacho is the author of six novels about Washington DC-based private eye Hannibal Jones, five in the Stark and O’Brien international adventure-thriller series, and the detective novel Beyond Blue. His short stories have been featured in several anthologies, including Dying in a Winter Wonderland, an Independent Mystery Booksellers Association Top Ten Bestseller for 2008. He is featured in the Edgar-nominated African American Mystery Writers: A Historical and Thematic Study by Frankie Y. Bailey.