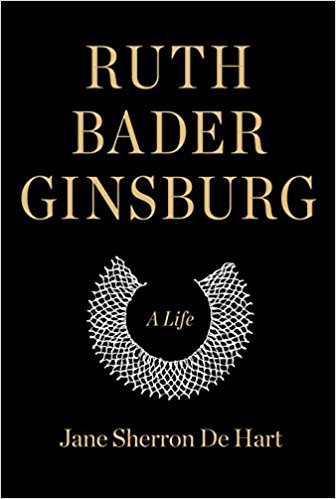 Ruth Bader Ginsburg won her appointment to the Supreme Court on the strength of a compelling personal story that overwhelmed President Bill Clinton. Introducing Ginsburg at a Rose Garden ceremony on June 14, 1993, Clinton forecast that Americans would "get to know much more about" his nominee in "the months and years ahead."

Twenty-five years later, Ginsburg's life history and her achievements are, in fact, well known to many Americans, thanks to her late-in-life celebrityhood embodied in the online "Notorious R.B.G." Tumblr.

The public's familiarity with Ginsburg's life presents a challenge for a serious biographer, but Jane Sherron de Hart, a specialist in women's history and professor emerita at the University of California-Santa Barbara, has succeeded with a masterful biography that adds depth and insight to Ginsburg's only-in-America life story.

De Hart's biography, unauthorized but written with Ginsburg's cooperation over a 25-year period, began with a modest request in 1993 to see Ginsburg's papers from her work in the 1970s as the founder and director of the Women's Rights Project at the American Civil Liberties Union (ACLU).

The story begins, as it must, with Ruth's beloved mother, Celia Bader, who instilled in her precocious daughter a love of learning and culture along with the Jewish imperative of tikkun olam — to pursue justice and compassion for others. Celia died on the eve of Ruth's high school graduation, but, as De Hart notes, her mother remains "a guiding presence" in Ginsburg's life, her picture prominent on the desk in the justice's Supreme Court chambers.

The path for this daughter of Jewish immigrants from her Brooklyn neighborhood to a storied legal career was anything but certain. With her shopkeeper father struggling, Ruth depended on a scholarship to attend Cornell. It was in Ithaca that she met the other dominant figure in her life story: her beloved Marty, the future tax lawyer, law school professor, and lead cheerleader for Ruth's judicial career.

Together, Ruth and Marty enrolled at Harvard Law School, where their first child was born and where Marty was stricken with survivable testicular cancer. Brett Kavanaugh's boast of having "busted my butt" to get through Yale and Yale Law School pales in comparison to Ruth's burdens of transcribing lecture notes for her ailing husband and taking her infant daughter along with her to bluebooking sessions at the Harvard Law Review offices.

Post-graduation (from Columbia, after a transfer), her job hunting with law firms was thrice disadvantaged: "a woman, a Jew, and a mother to boot," as Ginsburg later put it. She did land a clerkship with a federal court judge, but struck out at the Supreme Court, where Justice Felix Frankfurter rejected her application for a clerkship.

Ginsburg's career got on track thanks to a faculty position at Rutgers, where she created a course on sex discrimination in 1970 from her own compiled materials. With Rutgers as a base, Ginsburg proposed women's rights as an agenda item for the ACLU and helped secure funding for the project from the Ford Foundation, among others.

The ACLU cases began with a smashing success: the unanimous decision in Reed v. Reed (1971) to strike down an Idaho law that specified a preference for fathers over mothers to administer the estate of a deceased child. Ginsburg won the case with her brief, even though she yielded the argument to the local counsel, whose performance was notably below par, according to Justice Harry Blackmun's notes.

Other successes followed. After Ginsburg's argument at the lectern as amica, the Court in Frontiero v. Richardson (1973) struck down a military regulation that made it harder for female servicemembers than male servicemembers to obtain housing and medical benefits for their spouses. The unanimous ruling in Weinberger v. Wiesenfeld (1975) struck down a Social Security policy that made survivors' benefits available to widows but not to widowers.

By the end of the decade, Ginsburg became convinced that she needed to be on the other side of the bench to make further progress on women's rights. With Democrat Jimmy Carter in the White House, she applied for a judgeship in her home city with the Second Circuit, but the selection committee found her lack of experience in securities law disqualifying. She turned instead to the DC Circuit, winning the appointment from Carter only after being passed over three times.

In 13 years on the DC Circuit, Ginsburg won a reputation as a consensus-building moderate that helped shield her from partisan attacks after Clinton nominated her for the Supreme Court.

That appointment, too, was hardly preordained. Clinton had wanted to choose a political figure, either New York's governor, Mario Cuomo, who declined, or his Interior secretary, Bruce Babbitt, who was considered by environmentalists as too valuable in his then post. Ginsburg's interview came only once her future colleague, Stephen G. Breyer, had fallen flat in his earlier interview for the vacancy.

With limited information about the Court's internal operations, De Hart's account of Ginsburg's tenure necessarily relies primarily on her written opinions. She naturally emphasizes Ginsburg's personal victory in writing the nearly unanimous decision in the VMI case, United States v. Virginia (1996), that established a rigorous standard for judging sex-based distinctions in the law.

Ginsburg's persona recedes somewhat in De Hart's thorough descriptions of that and other major cases during Ginsburg's tenure. But she highlights Ginsburg's discomfort with the Roberts Court's retreat on racial justice and the justice's pleasure in presiding over a same-sex wedding after the Court's landmark decision on the issue.

As the book ends, Ginsburg has survived three bouts with cancer, and Marty's death from cancer in 2010, without having missed a single day of oral arguments. With her hopes for a liberal majority dashed by the failed Merrick Garland nomination, Ginsburg remains the leader of a liberal minority, with what De Hart describes in closing as an undiminished commitment to justice: "Never had her presence on the Court seemed more essential."

Kenneth Jost, a graduate of Harvard College and Georgetown Law School, is author of Trending Toward #Justice, the annual series Supreme Court Yearbook, and the legal-affairs blog Jost on Justice.