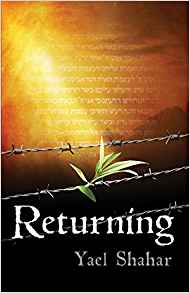 Returning is an extraordinary and challenging book on many levels. It attempts to make the intangible as close to tangible as possible. It engages readers in a kind of time travel that has nothing to do with science fiction. It might remind some of paranormal romance, but the stakes are much higher.

What genre does is belong to? Author Yael Shahar once thought of calling it “fiction memoir,” but that does not capture enough of its essence.

The workings of dreams are central to the book’s technique and meaning, but what if you dream someone else’s dreams? What if someone else dreams yours and remembers your memories? Shahar’s artistry is to make these “what-ifs” credible and meaningful; in fact, inevitable and necessary. She imbeds these actualized possibilities in a theological — or, at least, a biblical — context.

The primary character is an older man named Alex. He is a tormented, guilt-ridden soul who has lived in Israel for many decades following his escape from slave labor at Auschwitz-Birkenau. A Greek Jew from Salonika (“Saloniki” throughout this book), Alex, whose given name is Ovadya (servant of God), was part of a sonderkommando crew, mostly Jewish, who were worked to exhaustion day after day hauling away the bones and ashes of incinerated Jews and other doomed prisoners.

All of his adult life, Alex has been trying, without much success, to resist the constant pressures of memories that take him back to his sonderkommando experience, a trauma that he’d like to forget. As an unwilling witness and assistant to the obliteration of his people, Alex is a man with a diseased soul. Part of him knows that he must face his past and accept responsibility for actions taken and not taken.

He seeks the help of Rabbi Ish-Shalom (“man of peace”), a person of remarkable learning, wisdom, and sensitivity. The rabbi becomes a spiritual coach who leads Alex on the path of self-knowledge, atonement, and redemption.

But this is not a feel-good journey; it is filled with harrowing confrontations with Alex’s younger self. The rabbi insists, through a series of questions and refutations of Alex’s answers, that there are times when the giving of one’s own life may be the moral choice.

Alex’s resistance to his job of making room for the next victims to be pushed into the gas chambers would not have saved those lives, but that defense is slowly taken away during his conversations with the rabbi.

As Alex releases his memories, first by writing them down and later by speaking them aloud, he undergoes renewal and revelation that properly elevate his sense of self. He can take back his given name because he earns his right to it.

Yael Shahar as a character in her book is an intermediary between Alex and Rabbi Ish-Shalom. She brings them together. In a literal sense, with her name given as author of the book, she is telling Alex’s story — including his dialogue with the rabbi.

However, she seems as well to be a recipient or conduit for Alex’s memories and his paralyzing responses to them, which, like her own torturous memories, are consequences of trauma. Through her role in Alex’s story, Yael draws readers to sophisticated understandings of Post-Traumatic Stress Syndrome and appropriate therapies.

Part of the book, then, is the author’s memoir — one in which she is the subordinate character.

In terms of Jewish concepts, the book is poised on the relationships among the acts of returning, remembering, and t’shuvah, usually translated as repentance. Laced through the narrative are references to and quotations from the prophetic books that deal with the destruction of ancient Israel and the promised messianic age of restoration. The place of modern Israel in this scheme is given measured attention.

The graphic dimension of Shahar’s book is a typographer’s field day (or nightmare). Various sizes of various fonts are employed to signal the relationships among the book’s voices and concerns. There are also typographical distinctions in headings and subheadings that suggest hierarchical and other relationships of the content. These devices are a bit unsettling at first, but effective once one gets use to them.

Though Holocaust memory is the major concern of this dazzling exploration, presented in the age of a dwindling number of survivors, it has wider application on the more general level of addressing the importance, power, and utility of memory. This is especially useful in an age in which history and memory are often considered opposing constructs.