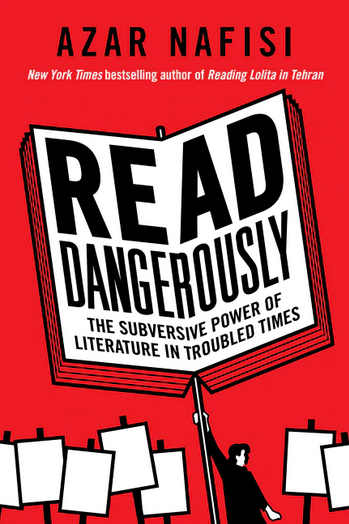 For almost two decades, Azar Nafisi has been writing about the intersection of her experiences in Iran and her interest in Western literature. Her most popular book, Reading Lolita in Tehran, is an account of teaching female Iranian students during the last two decades of the 20th century. Nafisi immigrated to the United States in 1997, writing additional books exploring how literature can open up in new ways when it is read cross-culturally — and also about how books have provided her with “new eyes with which to see both my homeland and my adopted country.”

In her newest work, Read Dangerously, Nafisi finds herself in an unexpected situation: “I never imagined that I would experience [the] same feeling of fear and helplessness living in the United States as I did in Iran under the Islamic Republic.” Literature has become endangered in both places, but for different reasons.

“In Iran, like all totalitarian states, the regime pays too much attention to poets and writers, harassing, jailing, and even killing them,” the author explains. “The problem in America is that too little attention is paid to them. They are silenced not by torture and jail but by indifference and negligence.”

Her book hits the shelves at a moment even more timely than she might have anticipated. American news is now full of headlines describing efforts to ban and even burn books all across the nation. Nafisi suggests that a cultural avoidance of pain is at the root. Although she seems to be referring to the practice of listing trigger warnings designed to shield students “from the bitterness of truth,” the criticism of so-called “critical race theory” is often predicated on a supposed desire to shield white students from feeling shame when learning about white supremacy. Too often, she writes, “We don’t want to be disturbed.”

Reading, Nafisi explains, is exactly the disturbance we need. What we learn from literature is a deep sense of shared humanity. Tyrants dehumanize the people they seek to oppress. At the same time, they present themselves as something more than human. Great literature does the opposite: It restores the dignity of humanity to the oppressed and the fallibility of humanity to the oppressor.

Nafisi structures her book as a series of letters to her father written over the months between the fall of 2019, when protests spread throughout Iran, and the summer of 2020, as events from the pandemic to Black Lives Matter activism shook the United States out of its complacency.

Each letter discusses a set of authors who confront issues of justice and injustice in different ways. Nafisi’s chapter on war highlights how David Grossman, Elliot Ackerman, and Elias Khouri create complex and nuanced characters on both sides of the Israeli-Palestinian conflict. In another chapter, she explores differing responses to race and gender oppression by characters in the stories of Zora Neale Hurston and Toni Morrison.

When looking at Margaret Atwood’s The Handmaid’s Tale, Nafisi considers how fiction exposes the ways totalitarian states use concepts of modesty to silence women and religious dissenters. Her most successful chapter explains how James Baldwin and Ta-Nehisi Coates make us consider the ways in which rage draws lines between us and how to work beyond those divisions.

Unfortunately, Nafisi’s decision to structure each chapter as a letter to her father is unsuccessful. She repeatedly addresses her beloved Baba, dead for more than a decade, in ways that are distracting and feel false. Countless times, when she has information to impart to the reader, she begins with phrases like “Baba jan, I draw your attention to the fact that…” or “You must remember that…” The device becomes more and more annoying as the book goes along.

Sometimes, Nafisi jumps through hoops to explain something that happened after her father died: “You and I have had no discussions on virtual reality, which became so pervasive after your death.” Other times, she has to explain to readers things her father would’ve been well acquainted with, including his own writing. “I don’t want to quote you to yourself,” she writes in one letter before doing exactly that for paragraph after paragraph.

She also tells us every time she refills her coffee cup, perhaps to lend her prose the chatty feel of a casual letter about books rather than a formal literary analysis. But the effort falls short; her repetition steals the reader’s attention from the actual ideas about which she writes.

Read Dangerously would have been far more successful if Nafisi talked not to but about her father, a choice that would’ve allowed her to reflect more comfortably on his commitment to justice and resistance, as well as his love of literature and learning, both of which inspired her so deeply. In this sense, at least, the book is indeed a beautiful love letter to her father, the man who taught the author to read dangerously and to respond to the troubled world with an abiding sense of connection and hope.