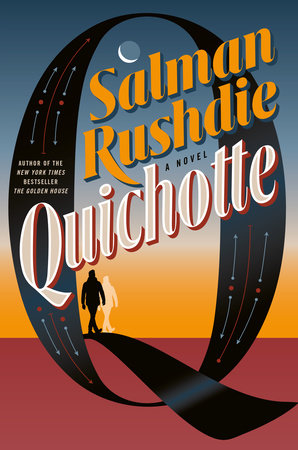 Ismail Smile, a traveling salesman for a pharmaceutical company, has spent endless hours in tawdry motel rooms watching mindless television “and suffered a peculiar form of brain damage as a result.” The principal manifestation of his lunacy is the inability to distinguish between truth and reality.

When Ismail loses his job, he takes off on a cross-country journey in search of his idol, Miss Salma R., an Indian talk-show hostess and former Bollywood star. Although he has seen her only on television, he writes her love letters, which he signs “Quichotte.”

While on the road in his old gunmetal grey Chevy Cruze, he ruminates on how much he would have liked to marry and become a father. Unfortunately, he has never been able to maintain a relationship, but he is convinced that in this “Age of Anything-Can-Happen,” he will someday find and wed Miss Salma R., and she will bear him numerous children.

One day, during an outburst of favorable astrological omens, the “longed-for son, who looked to be about 15 years old, materialized in the Cruze’s passenger seat.” He appears in black and white, “his natural colors desaturated in the manner that has become fashionable in much modern cinema.” Quichotte names him Sancho.

It turns out that Quichotte is a metafictional character, the creation of a New York-based, Indian-born author of second-rate spy novels. His pen name is Sam DuChamp, but he is called Brother for an astonishing reason: His grandfather owned a jewelry store, which he would have liked to call Zayvar Brothers because he thought the name elegant, but since he was an only child, he decided to name it Zayvar Brother.

He was, after all, a “brother without a brother.” People started calling him Brother Sahib, Mr. Brother, and the name stuck. Sam DuChamp is Mr. Brother III. Like his character Quichotte, Brother has a sister, known as Sister, from whom he became estranged after a terrible quarrel.

Both Salman Rushdie’s Quichotte and Cervantes’ Don Quixote are meditations on the relationship between truth and fiction, the transformational power of art, societal change, questions of personal and collective identity, and the position of minority groups within the collective.

However, while Cervantes provides a panoramic view of Spain’s transition from feudal to mercantile (and the questioning of traditional hierarchy that accompanies it), Rushdie focuses more pointedly on a particular group: Indian immigrants in an America he depicts as a uniformly vacuous, racist, consumption-obsessed, opioid-drenched nation.

The difference in viewpoints is manifested in Rushdie’s handling of characters drawn from his source. Don Quixote’s beloved Dulcinea is a fantasy — inspired by a neighborhood farmgirl, but nevertheless a figment of his imagination. Salma R., in contrast, is an addict and a manipulator who at first sees Quichotte as a dangerous weirdo, then as a supplier of drugs, and finally, as a means of escaping a collapsing world.

Cervantes’ Sancho Panza is a down-to-earth rustic who, in spite of nurturing certain fantasies, is more concerned with a good meal than with his master’s utopian yearnings. His pragmatism and shrewdness contrast — often to great comic effect — with Don Quixote’s idealism. He is a loving and lovable character, unlike Quichotte’s crass, inconsiderate, annoying teenage son, Sancho.

Of course, every work of art must be judged as an individual creation. Rushdie has not set out to write another Don Quixote, but, like DuChamp, to create a novel “radically unlike any other he had ever attempted.”

Although Quichotte starts out with a bang (the portrayal of the television-obsessed Ismael Smile is truly hilarious), in the end, it is not completely satisfying, not because it deviates so radically from Don Quixote, but because it fails to live up to its own potential.

After the brilliant first few chapters, Quichotte too often slips into silliness. For example, as the protagonist and Sancho travel across America to New York to search for Salma R., Jiminy Cricket appears to Sancho and turns him into a real boy who now appears in living color. When they finally meet up with Salma R., she is involved with the scientist-entrepreneur Eval Cent, a comic-book-like character whose CentCorp has devised a kind of inter-dimensional travel to deal with “the environmental, political, social, [and] moral” decay of the planet.

Another issue is the overabundance of clichés. In the small towns in which Quichotte and Sancho stop, the inhabitants are invariably rude and racist, mistaking the pair for Arabs or other minorities. In one episode, the two travelers are run out of a trailer park. In another, they are eating in a tiny restaurant when an armed assassin bursts in and mows down some Indian men who are quietly conversing.

The Indian characters fare no better than the others: They are all crooks or addicts. The Indian owner of the pharmaceutical company for which Quichotte worked has made a fortune on opioids, and Salma R. is one of his best customers. The outlandishness and the unrelenting references to skin tone eventually become tedious.

In Cervantes’ Don Quixote, the unreliable narrator’s allusions to multiple authorial sources and conflicting narratives raise issues about textual authenticity and authority. In Quichotte, Rushdie broaches these same questions quite successfully. However, his real philosophical-literary concern seems to be the relationship between author and character.

Brother’s life closely parallels his protagonist’s, and also, in some ways, that of Rushdie, who was born in Bombay to a Kashmiri Muslim family and has three sisters. DuChamp, like Quichotte, has a challenging relationship with his sister, one that reaches its climax when he visits her in an England no less racist and degenerate than America. Like Quichotte, he struggles with questions of Indian-Muslim identity, and, like him, yearns for a healthy relationship with a son (only, in this case, he has a son from whom he is estranged).

The repeated intrusions of Quichotte’s story into DuChamp’s and vice versa provoke questions about the creative process and sometimes disorient the reader. Like Cervantes, Rushdie leaves us unsure of what is real and what is fiction within the narrative framework, which leads us to question and reexamine our own convictions, our own sense of what is “real.”

Although elements of the novel can be off-putting, Quichotte is nevertheless a thought-provoking and at times highly entertaining book. It is perhaps not Rushdie’s best, but it is worth a read.

Bárbara Mujica is a professor emerita at Georgetown University, where she taught Don Quixote both in Spanish and English, on the graduate and undergraduate level. Her most recent publications include “Don Quixote: A Collision of Mind-Sets,” Teresa de Ávila: Lettered Woman, A New Anthology of Early Modern Spanish Theater: Play and Playtext, and Women Writers of Early Modern Spain: Sophia’s Daughters. Two new books are scheduled for publication in 2020: Women Religious and Epistolary Exchange in the Discalced Reform: The Disciples of Teresa de Ávila (Amsterdam University Press) and Collateral Damage: Women Write about War (University of Virginia Press). In addition to being a scholar, Mujica is a novelist, short-story writer, and essayist. Her novels include I Am Venus, Frida, and Sister Teresa. Mujica has won several prizes for her fiction, including the E.L. Doctorow International Fiction Competition, the Pangolin Prize, and the Theodore Christian Hoepfner Award for short fiction. Three of her stories and two of her novels have been winners in the Maryland Writers’ Association national competition. Sister Teresa and two of her stories have been adapted for the stage.