Play Anything: The Pleasure of Limits, the Uses of Boredom, and the Secret of Games

This interesting read asks us to skip cynicism and enjoy the moment, but ignores exploitative systems in the process. 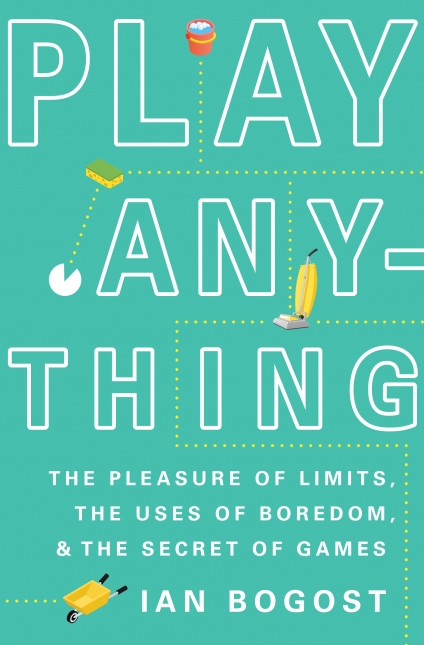 Recently, I’ve been playing two very different video games. One, Bloodborne, is brutally demanding and dreary, and I love it. The other, Destiny, is a Technicolor lightshow of bullet-spraying power-fantasy, and it gives me all the joy of a rat repeatedly pressing a lever.

Ian Bogost sees a life lesson in that counterintuitive response, and his new book is dedicated to explaining it. Play Anything marshals thinkers from Wittgenstein to Marie Kondo to Bruno Latour on a quest to define and challenge what Bogost argues is our culture’s increasingly perverse relationship to the idea of “fun.”

He’s uniquely suited to the task, a programmer and videogame designer who is also an insightful, jargon-averse cultural critic (his Lacanian analysis of the McDonald’s McRib sandwich for the Atlantic is a minor masterpiece).

First and most effectively, Bogost skewers our contemporary tendency to think of “fun” as something easy and pleasurable. Paralleling Barbara Ehrenreich’s Bright-sided, he lambastes the “gamification” of things like routine work, which attempts to mask drudgery with smiley-faced points systems and prizes. Instead, he argues powerfully that “fun is the opposite of happiness” — that real fun involves not sparkly pleasure, but concentration and engagement. In short, Bogost thinks we should aspire to lives that have more in common with Bloodborne than Destiny.

Bogost also faults what he calls “ironoia” — a resistance to fun that takes the form of cynicism, condescension, and refusal to engage with the world. To counter the tendency, he illustrates ways in which real, challenging fun can be found in his local mall, a trip to Wal-Mart, and in his struggle with his suburban Atlanta lawn.

Bogost points out that contemporary “ironoiacs” tend to see these moments as corrupt or beneath them. Instead, he says, we should dig into them — learn the ins and outs of lawn maintenance, “embrace the stupidity of mall floors,” and marvel at the wonder of jumbo-sized Wal-Mart ketchup jugs.

We should embrace these things “as they are” and learn to “play” them like games, making up rules within temporary “magic circles” built around our experiences. For instance, he catalogs an array of bizarre and banal products he finds in Wal-Mart, turning consumerism into self-conscious play.

But there is something deeply dangerous about this aspect of Bogost’s argument. Because, while a temporary magic circle may enrich our experience of going to Wal-Mart or traversing the mall, those aren’t just transitory experiences — they’re manifestations of entire systems. And Bogost’s call to take joy in those systems often seems like a call to simply accept our entrapment in them.

This flares up most disturbingly when he says that those who mock suburban lawns are doing so only because it is “easier to avoid even wanting to own a house you can’t afford anyway.” Rather than rejecting convention, he says, we should explore the “endless ways to circumscribe and address the perverse and fundamentally idiotic burden of owning and managing a meadow you have coerced to flank your property.” He does so by putting copious amounts of money and labor into maintaining his.

That’s a hell of a reactionary way to respond to criticism of suburbia, implicated as it is in car culture, and, lest we forget, a global catastrophe that threatens human society. I’d say a little less proactive accommodationism and a little more critical detachment is exactly what’s called for.

It’s clear, here and elsewhere, that Bogost is missing a major aspect of the nature of irony. Certainly, it can be the kind of blasé capitulation he describes — “Not knowing and not being able to know is the meaning of irony today.” But irony is also a form of performative critique. It is, in fact, its own kind of engaged play, a Hegelian making-use-of, but one that challenges the rules of the game. Take Nirvana, a band whose affected indifference superficially exemplifies Bogost’s critique of ironoia — but who were, in fact, social satirists, their sloppy dress and unkempt hair sending a message about what they saw as the twisted values of the culture around them.

Somehow, though, Bogost doesn’t see the “game” of ironic critique and deconstruction as its own kind of deeply thrilling magic circle. To walk into a Wal-Mart and delineate the absurdities it houses, the crimes it masks, the exact nature of the sickness at its heart — that is not just a socially useful act, but, yes, an invigorating joy. That our denatured education system has made the game of critique inaccessible to most only makes belittling it more dangerous.

And Bogost’s call to turn the world into a series of magic circles risks an even deeper kind of detachment than the ironoia he opposes. He argues, for instance, that simply framing a Chee-To a little differently — putting manufactured food-shaped poison in a magic circle of fancy words — would make it a smash in the fine-dining world. He says we should “allow lawns and malls and soccer pitches to show us their desires.”

Bogost is essentially arguing that our problem is not the world as it exists, but our perception of it, that the mundane horrors of our time could be turned into joys if we simply appreciated them more deeply.

But these things don’t have their own desires, and they are not made up merely of perceptual frames — they’re the product of human planning, and often, human power. It’s telling that Bogost approvingly name-checks Robert Moses, a sadistic dungeon master of the urban-planning game that made those perverse lawn-playgrounds possible.

But there’s more than one game in town — the last five years have shown us that the magic circle can be turned inside out to encompass the whole world. Occupy Wall Street took play deadly seriously, but would have had no use for Bogost’s call for a renewed commitment to everyday life. Black Lives Matter is finding ways to change the game not just for some, but for all. Because the rules are real and they were not all written in our best interest, and self-deception won’t do anything to change them.

David Z. Morris is a writer and researcher focused on media, transportation, technology, and culture. He covers technology for Fortune Magazine, and his journalism has also appeared in the Atlantic, Aeon, Pacific Standard, and Wired. He holds a Ph.D. in media studies from the University of Iowa, and has served as a research fellow with the Japan Society for the Promotion of Science and the University of South Florida. He lives in Queens.