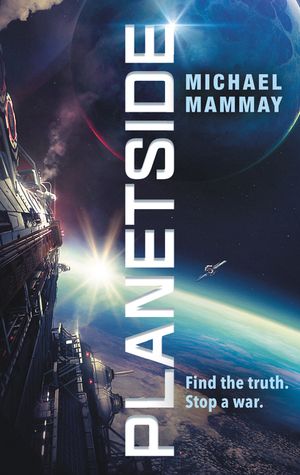 When the first sentence of a novel contains a curse word, the author is issuing a challenge: Love this book or hate it. Planetside, the debut novel by Michael Mammay, is an easy book to love.

So is protagonist Carl Butler, a semi-retired colonel called back into full military service by an old friend offering a sweet deal. Planetside blends the finest in military science fiction tradition with humanity, personal perspective, and a compelling plot infused with mystery.

Butler's mission is to find out what happened to a High Councilor's son, a soldier who went missing in the only alien warzone where the local population is fighting human colonization efforts.

General Serata knows Butler is right for the job. The colonel understands the power of interpretation. "I wouldn't falsify a report...But you could find a dozen truths in any situation. I had no problem telling the one that helped the team." Butler is joined by Staff Sergeant "Mac" McCann and the Bitch, a Bikoski 71 projectile rifle, guaranteed not to go "to shit" when it gets wet.

The size of Colonel Butler's team expands as soon as he reaches Cappa Base, the space station orbiting the warzone planet, Cappa. Each new team member is suspect, even the extremely competent station intelligence officer, Major Lex Alendra, and General Serata's aide, the untested Lieutenant Hardy.

Butler assumes both staff were assigned to him so they could report back to their commanders. Alendra and Hardy aren't the only potential spies. The station is filled with them. All eyes are on Butler any time he enters a room. The colonel is an outsider, the "bigwig coming from headquarters to check out the brigade."

Every path Butler tries to take is blocked. Medical Command bans him from their part of the station. Special Operations down on the planet won't talk with him. The station commander is actively lying to the colonel.

Before long, Butler and a squad have descended to Cappa, a planet that smells like "stale laundry with a hint of sulfur." They are being fired upon despite traveling in an "MT-488 hover vehicle, affectionately known as the Goat because it went anywhere and did anything." Soldiers around Butler are dying. The whiskey he smuggled into Cappa System can do only so much to ease his mind and the aches in his robotic foot.

Small mysteries become large ones and branch in a dozen directions. Records about the High Councilor's son disappear. Surveillance data evaporates. Someone who might talk with Butler is shipped away to a psychiatric ward. The colonels who should be Butler's colleagues fight amongst themselves.

Several seem to know what happened to the High Councilor's son, but they aren't talking. Soon, the mystery of one soldier's disappearance becomes a question of just how bad things are on the planet below. Forgetting the pull of retirement, Butler confronts one obstacle after another in the quest to stop the Cappa problem from affecting the rest of the galaxy.

Planetside is a military sci-fi novel that even those who’ve never before tried the genre will find easy to read. Ranks are contextualized with engaging dialogue and descriptive prose. An officer junior to Butler is someone whose "bearing slipped for a second...Stiff and official. Young." A different lieutenant has a "baby face and red cheeks...he looked fifteen."

Only a conversation between two people of the same rank, colonels in this case, can include the command, "Stay the fuck out of my hospital." It takes someone more senior to Butler to say he must contain the situation and expect no help.

For those who already love this genre, the portrayals of honor, teamwork, and devotion to duty will resonate. The author is a retired Army officer, after all. Over and over, he demonstrates he understands the military mindset, like when Butler gives an order to a member of his security detail. "'Yes, sir,' he said, before ignoring me and following me anyway. That was the thing with soldiers. You could give them orders, but in the end they'd always listen to their sergeants. Survival mechanism."

In a wry bit of mission-focused leadership example-setting, Butler repeatedly helps those around him believe the decisions they make are their own instead of the colonel's. With his wealth of experience and his ability to make information inform action, Butler is the perfect soldier for the job.

Planetside is a page-turner and an extremely satisfying read. The mysteries that are still unresolved at the end of the novel point in just one direction: to a sequel. That's a good thing. Colonel Butler still has important work to do. It's too soon for him to retire.