A concise and panoramic view of the major players, themes, and products that have shaped the island nation. 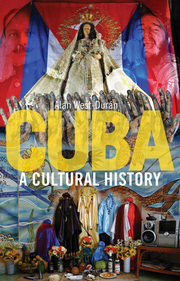 Alan West-Durán’s Cuba: A Cultural History presents a broad overview of how varied cultural forms in Cuba have evolved and intersected with the island’s complicated history since independence. Through pertinent illustrations from the areas of literature, film, music, and the visual arts, West-Durán explores how specific cultural events and representations are actually instruments for conveying the story of Cuba’s history over the last hundred-plus years.

Through some in-depth considerations of cultural forces at play — like the examination of Afro-Cuban religions and their cultural resonance, the discussion of Cuba’s sweeping changes to cultural institutions in the Revolution’s aftermath, or even the reflections on transvestism as a cultural metaphor for exploring post-revolutionary Cuban identity — West-Durán offers thought-provoking angles for probing the interplay between history and its socio-cultural corollaries.

Moreover, in establishing connections between certain cultural forms at different moments in Cuban history, especially in relation to literature and film, West-Durán offers readers a panoramic trajectory of Cuban cultural history alongside its borrowings and overlapping hybridities.

In addition to an introduction and conclusion, the book consists of five chapters, each dedicated to a specific time period of Cuban cultural history: 1898-1930; 1930-1959; 1959-1980; 1980-1990; and 1990-2014. From the outset, West-Durán explicitly notes that this book “is neither offering a timeline narrative of Cuban history, nor is it a traditional history of Cuban culture going genre to genre.”

And yet, the chronological organization of the chapters seems to call for the very timeline rejected by the author, which at times produces some tension with the subject matter presented in each part. Precisely because West-Durán so adeptly draws connections across time periods, past and present, specific content often spills outside of a given chapter’s parameters.

For example, the first chapter, which contains an examination of the early-20th-century musical genres of the danzón and the son, also explores the 1967 novel De donde son los cantantes, which was inspired by a famous Cuban son.

This tactic is employed throughout the book; thus, the reader should approach the text with the understanding that rather than offering a centralized analysis of a given time period’s main cultural currents, each chapter is instead crafted to include some of that time frame’s most representative cultural elements along with references to cultural manifestations in other time periods.

Chapter one explores the central cultural articulations of the post-independence period, including the era’s musical expressions, afrocubanismo (and its ties to contemporary Cuban music), and the role of Cuban intellectuals like Jorge Mañach. Yet it is through the juxtaposition of two notable Cuban figures, José Martí and Julián del Casal, that the chapter offers poignant insight by opening an avenue for exploring the combination of politics and aesthetics that shaped subsequent Cuban cultural production.

The next chapter centers on the Machado era through the Cuban Revolution by highlighting central literary figures and movements, like José Lezama Lima, Virgilio Piñera, and the Orígenes group. It also traces the growing influence of popular mediums like photography, television, and radio.

Chapter three surveys the major cultural changes prompted by the Cuban Revolution, while also dedicating considerable attention to the increasingly tense relationship between the Revolution and artistic production as triggered by the banning of the film “P.M.” and the international controversy over the Heberto Padilla affair. This chapter also covers the Nueva Trova movement’s emergence, Tomás Gutiérrez Alea’s films, and the rise of the detective novel during this period.

Chapter four charts the events connected to the Mariel exodus, with the rest of its attention devoted primarily to Reinaldo Arenas’ memoir, Before Night Falls, and Ana Mendieta’s performance art.

Overall, the book succeeds in offering readers a concise and panoramic view of the major players, themes, and products that have shaped Cuban cultural history since the end of the 19th century. That said, this overview is at times more presentational than analytical, with research employed minimally in several areas while applied generously in others.

While some parts offer a complete picture of a period’s cultural milieu, there are other moments when this picture is partial at best. For instance, while the reader will walk away with a solid understanding of the island’s cultural environment in the decade after the Revolution, that same reader will come away with only snapshots of Mariel or Special Period cultural production rather than with a comprehensive picture.

Similarly, the diasporic/transnational elements so important to Cuban cultural production are explored through content dedicated to the likes of Desi Arnaz or Carolina García-Aguilera; yet, these elements are not taken into account in some areas, such as Mariel and Special Period literary production, where they are fundamental for a fuller understanding of the periods’ cultural significance.

Nonetheless, despite these moments of unevenness, West-Durán’s book is a relevant and necessary contribution for cogently mapping out Cuban cultural history’s intricate landscape. Written in a clear style that is accessible to readers across fields, Cuba: A Cultural History is a must-read for those seeking a better understanding of the unique relationship between cultural production and the complex layers of Cuban history.

The Half Has Never Been Told: Slavery and the Making of American Capitalism

An illuminating look at how the U.S. economy was, indeed, built on the backs of slaves.