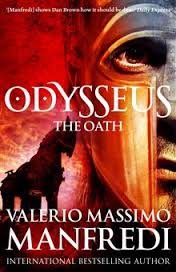 An appealing portrait of a bright young boy opens the first chapter of Odysseus: The Oath, volume one of Valerio Massimo Manfredi’s trilogy of novels about the famous hero. Young Odysseus longs for his father, King Laertes of Ithaca. We follow him as he eagerly welcomes his father home and learns about his father’s comrades and their adventures, especially his father’s fellow Argonaut, Hercules. When he is old enough, he accompanies his father on visits to other royal houses and with him, explores the mystery of the tragic killing of Hercules’ family.

In addition to his father’s guidance, Odysseus has his tutor, Mentor, who is capable of receiving his precocious pupil’s utterances with skepticism, and his coach in weaponry, Damastes. Teaching the use of a sword, “the most terrible of weapons,” Damastes warns: “To strike you have to be close enough to the enemy to look into his eyes, to feel his breath on your face…You will run him through from one side to the other; his blood squirts out at you, his bowels burst out of the wound, the smell is nauseating…And that’s what men call ‘glory.’ That’s what the poets sing of when they celebrate the deeds of heroes, accompanying their words with a lyre.”

This causes Odysseus to think “the toll of my passage into manhood was learning about all the ugliest aspects of life and of other human beings.” Occasionally in the novel, Odysseus wonders about the significance of what he is experiencing, but he never appears to come to any conclusions, nor, unfortunately, does he give those thoughts more than passing consideration.

Now a young man, Odysseus travels to join the suitors of the famously beautiful Helen. He has come up with a plan to prevent mayhem on the part of those suitors who fail in their wooing: all the men will swear an oath to defend the marriage, no matter who is chosen to wed Helen. Before the choice is made, Odysseus meets Helen’s cousin, Penelope, with whom he falls in love.

Manfredi seems to suggest that Helen chooses Menelaus in a fit of pique because Odysseus prefers Penelope. Penelope and Odysseus arrive back in Ithaca where they marry, but not long after the birth of their son, Telemachus, Menelaus brings news of Helen’s abduction by Paris.

Odysseus agrees to accompany Menelaus on a voyage to Troy so that they can try to get Helen back without calling upon the suitors to wage war. Unfortunately, the mission fails, and war becomes inevitable.

Manfredi has trouble dealing with a 10-year war in the second half of the book, which takes us to the fall of Troy and Odysseus’ departure from the ruined city. Too many paragraphs begin with phrases like “The war went on” or “Much time passed” before we finally get to the Trojan horse.

The dialogue varies from the easy colloquial back and forth of the early scenes to portentous pronouncements and unlikely phrasing such as “The fame of your multifaceted mind, my son, has reached the opposite shore of the sea and will precede you in Asia.” Then there is Odysseus inspiring his troops with “the triple war cry of the king of Ithaca":

And what response can that inspire in a reader? Tee-hee, perhaps?

The exploits of ancient heroes fascinate generation after generation. The centuries-old debate about the relative merits of Achilles and Odysseus is still re-argued by partisans of each. The author of Odysseus: The Oath is clearly a fan of his title character. In an author’s note, Manfredi declares that “Odysseus is the absolute protagonist of the Iliad as well as the Odyssey,” which may surprise those readers who thought the Iliad was about the wrath of Achilles.

Manfredi also credits Odysseus with the killing of Paris, although most sources chalk that death up to Philoctetes. He does, however, report the incident of Odysseus running away from the battle, and suggests that Odysseus tricked Ajax out of the armor of Achilles, thus contributing to Ajax’s madness and suicide.

Are these black marks against the hero meant to give the reader a more complex view of him? Manfredi never follows up on the question that Odysseus asks himself more than once: Why they are fighting the war? Odysseus thinks it must be something beyond just retrieving Helen, but does not attempt to answer his question.

If the author had given us some possible avenues of thought on the part of his protagonist, we might have moved past the two-dimensional view of the hero that is presented in the second half of the novel.

Still, Athena, Odysseus’ patron goddess, who appears to him in various guises, declares “I love your fear and your courage, your hatred and your love, your voice and your silence…No god could ever be what you are, not even if he wanted to.”

That’s a pretty ringing endorsement from the goddess of wisdom. May readers consider that hyperbole, or must they, like Manfredi, set this hero above the gods?

Alice Padwe has reviewed fiction, history, and memoirs and has edited all sorts of books, from college texts to spy thrillers.