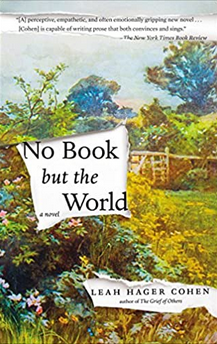 Ava and Freddy grow up in the bucolic freedom of Batter Hollow, the former site of a school run by their father, Neel, a Rousseau enthusiast who believes it important to “resist order” and the “conventions of civilized society.” Left to their own devices, they spend their days prowling the surrounding woods and do not attend the local school until Ava insists upon it, a betrayal her father considers nearly as great as her wish to try out for the “mindless conformity” of cheerleading several years later.

While Ava finds herself drawn to the order and neat explanations of the outside world, even while doubting that she will ever fit in there, Freddy is unable to function anywhere except Batter Hollow. He is a boy prone to emotional outbursts and occasionally violent physical behavior. An awkward communicator whose parents want to give him “freedom from the label of a diagnosis,” his single semester at the local school is a disaster. And it is Cohen’s portrait of this boy who is challenging but not unreachable that is one of the novel’s greatest tragic elements; Freddy loves the stories that his sister reads him and is happiest in Midgetropolis, the imaginary kingdom-in-the-woods that Ava and her best friend, Kitty, another Batter Hollow resident, have devised.

But Freddy is an oddity even within the sheltered community of Batter Hollow, which has become a kind of impromptu living experiment inhabited by a handful of Neel’s former students and disciples. In subsequent decades, those inhabitants migrate slowly away and Freddy’s world grows ever smaller. After Neel’s death, his mother must finally confront the pitfalls of Freddy’s upbringing and the sobering question of what will become of her now-adult son after she, too, is gone. Unwilling to burden Ava, who is leading her own life in New York City, she turns to the kindness of strangers and sends Freddy into the world on a series of supervised but ultimately disastrous forays, demonstrating that what might make him self-sufficient in the Arcadia of Batter Hollow does not translate to the world most Americans inhabit.

It is on one such foray that Freddy finds himself alone in the upstate town of Perdu, implicated in the death of a 12-year-old boy. Ava, who has not been in contact with Freddy for nearly two years, attempts to come to his rescue. She faces an insular community, an overworked court-appointed attorney who is not fully apprised of the case’s particulars and a system that is eager to pigeonhole her brother. Most importantly, though, she must grapple with the question of whether her brother is capable of the violence he is accused of.

Although the novel is told from multiple points of view, Ava’s voice provides the predominant narrative thread and Cohen is adept at highlighting the intricacies of her situation. Ava is both protective and critical of her father’s approach to parenting, at times resentful of its experimental nature and the way it has set her apart. And much of Freddy’s upbringing – so well intentioned and optimistic in theory – clearly backfires in practice, leaving him alone and ill-adapted to the world as an adult. Like her parents, however, she does not think that any textbook diagnosis can neatly explain her brother; at one point, an adult Kitty muses that Freddy might be “on the spectrum,” but Ava has spent a lifetime trying to understand him and even she cannot fathom – or classify – his complexities.

In the novel’s last few pages Cohen makes a narrative gamble that does not entirely pay off, bringing the author to the forefront of the storytelling. But it is a relatively small misstep, and the novel raises important questions about the responsibilities siblings bear one another, especially siblings on such unequal footing as Ava and Freddy. It also demonstrates how childhood shapes us for decades after we stop being children, and the reward we reap from – combined with the price we pay for – an unorthodox upbringing.

Courtney Angela Brkic’s novel The First Rule of Swimming (Little, Brown & Co.) is out in paperback this summer. She teaches in the MFA program at George Mason University.