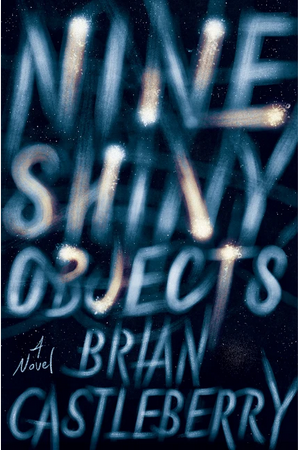 It’s clear from Brian Castleberry’s debut novel, Nine Shiny Objects, that he is a formidable short-story writer. The novel, parceled into nine viewpoints, each spread five years apart, almost feels like a short-story collection itself. Unfortunately, Castleberry fails to adequately tie the narratives together in a way that satisfies the reader.

To be sure, the novel does have a focus: the snowy, terror-filled night during which residents of a Long Island town attack a nearby community attempting to live out the vision of their founding member — a society free from divisions of race, ethnicity, and sexuality. This event, however, doesn’t occur directly during the book; rather, it takes place in the interval between two of the narratives and, thereafter, is alluded to in some of them.

If every narrative clearly related to the incident — if each, say, were one person’s memories of that fateful night or an account of the consequences of their actions — this lack of center might not be a problem. The viewpoints, however, are more akin to snapshots of each person’s life, the connection to the attack or its effect on the person sometimes only becoming clear after several pages.

Paired with the expansive timeline, this leads to occasional confusion — how is this person, who wasn’t born when the attack occurred, affected by it? How was that person involved? It also makes it difficult, though not impossible, to feel connected to any character, as we know they will only be with us for a short time until we move on to the next narrative.

Despite its shortcomings, Nine Shiny Objects is beautifully written, with prose that occasionally verges on maudlin but more often stays on the right side of sentimental.

About a woman reminded of a bygone slight, Castleberry writes, “This old rejection, not even rejection, this old embarrassment, this old wound, surfaced like a fish in opaque water. She hadn’t seen it coming until the light of her mind struck its glistening flesh, and its sudden presence emptied her out cold.”

A man who has just lost a beloved relative “climbed the two flights [of stairs] like a man being filled from the top with sand, each step a little heavier. Inside, in the whorling silence, speckles of dust turned uneasily in a shaft of yellow morning coming from his uncle’s room.”

And a young girl broods in a car ride back from a party with her friends:

“If she had a choice, if she’d learned anything tonight, she would never speak to any of them again. But she knew here, too, that this wasn’t how things would work out. She would find a way to call Stacy, and later find a way to ask Wolfboy’s forgiveness. And inside she would hate them both a little for knowing her too long, for not letting her change, not letting her find who she really was.”

The author is certainly effective at capturing emotions, which makes it all the more frustrating that what should be the emotional anchor of the book is never properly examined. One feels that, had the reader been given more of a chance to witness and learn about the attack, we might be more invested in the narratives. As it is, we are privy only to jumbled memories of the night, lacking in depth and clarity.

Taken purely on its writing merits, Nine Shiny Objects is a strong first novel. No doubt Brian Castleberry’s talents will only continue to improve with time.

The German invasion of Holland forms the background of a man’s struggle to find himself.