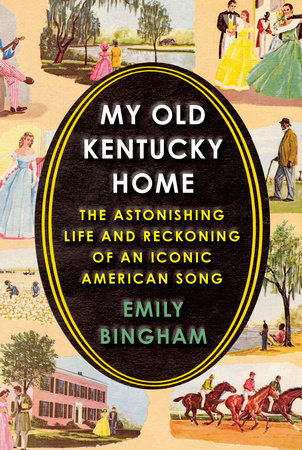 “The sun shines bright in the old Kentucky home,
‘Tis summer, the darkies are gay;
The corn-top’s ripe and the meadow’s in the bloom,
While the birds make music all the day.
The young folks roll on the little cabin floor,
All merry, all happy and bright;
By ‘n’ by Hard Times comes a-knocking at the door,
Then my old Kentucky home, goodnight.”

Today, when listeners hear Stephen Foster’s most iconic song, they likely think of the Kentucky Derby and the Old South. Intentionally or not, they tend to merge “My Old Kentucky Home” with “Dixie,” the latter a song about someone far away from the place they love. The former, in actuality, is about an enslaved person, sold downriver to die, who longs to be back among his family and benevolent masters where he belongs — an insidious narrative that originated in Uncle Tom’s Cabin.

In her new book, My Old Kentucky Home: The Astonishing Life and Reckoning of an Iconic American Song, journalist Emily Bingham wrestles with the seminal tune’s complicated past, its revisionist whitewashing, and its potential to represent modern-day Kentucky as “a home for all, one that need not be so far away.”

“Generation after generation of whites have cashed in on a song that helped sanitize the American past,” she writes. “One little song reproduced slavery’s brutality for the sentimental and material benefits of white people.”

Many of the song’s most carefully cultivated and maintained images of a genteel, bygone era were inspired by Federal Hill, a plantation just 30 miles south of Louisville, where Bingham’s family built a media empire and where she is now a history professor. The city overlooks the Ohio River, the one-time dividing line between slavery and freedom.

Ironically, Kentucky was a Border State during the Civil War and never seceded from the Union; nearly 70 percent of its soldiers fought for Abraham Lincoln and the North. Its identity as a bastion of the Old South is a myth.

Said a recent article in the Lexington Herald-Leader, the state’s second-largest newspaper, “‘My Old Kentucky Home’ shows the extraordinary ways we deceive ourselves about history and identity. The song is integral to Kentucky’s long, slow descent into a ‘Southern’ state of moonlight and magnolia that happened AFTER the Civil War…a place where slavery was somehow a benign force, not the horrifying crucible of racism that haunts us today.”

Since becoming the state song in 1928, “My Old Kentucky Home” has seen its lyrics praised, protested, altered, and mythologized in thousands of performances by everyone from Bing Crosby and Kentucky Gov. A.B. “Happy” Chandler to Bugs Bunny, John Prine, and the Nappy Roots. In 1986, the offensive “darkies” was replaced with “people,” and any and all misty-eyed references to slavery were excised:

“The sun shines bright in the old Kentucky home,
Tis summer, the people are gay;
The corn-top’s ripe and the meadow’s in the bloom
While the birds make music all the day.”

Still, the controversial song remains on a cultural continuum with D.W. Griffith’s 1915 silent film, “Birth of a Nation” (which perpetuated negative Black stereotypes and brought the Ku Klux Klan into the mainstream), Annie Fellows Johnston’s The Little Colonel series, popularized in 1935 by Shirley Temple’s movie “The Little Colonel,” and even in the persona of Colonel Sanders — whose white suit, goatee, and bowtie entrepreneur Harland Sanders based on Lionel Barrymore’s character in the Temple film — which lives on at 250,000+ KFC locations worldwide.

Despite the reality that Foster, who wrote many minstrel songs, tried in “My Old Kentucky Home” to present slavery as carefree while also telling a wrenching story of an enslaved man being sold to die in the sugarcane fields of the Deep South, the fact remains that “the song was sung by white men in blackface for years, entertaining white audiences,” writes Bingham.

Yet her book is not an attempt to distance her beloved home state from its problematic song, it’s an effort to understand both as fully as possible. “People think I’m out to destroy the song, [but] I wouldn’t have written a book about it if that were the case,” explains Bingham, a self-described “dedicated Kentuckian.”

Instead, she hopes readers will come to see the song for what it is and to recognize that it’s hurtful (if not downright racist) to a large group of Kentuckians. “Eleanor Roosevelt said if you study history honestly, you’ll still love your country just as much.”

That’s proven true for Bingham herself.

When, in the 1990s, some out-of-state friends visited the author, she took the opportunity to proudly show off Louisville by taking them to the Kentucky Derby. When “My Old Kentucky Home” began to play, she found herself tearing up.

“It was a moment of revelation,” she recalls. “I needed to find out how it was written, and as I did, my discomfort grew.” My Old Kentucky Home is the unflinching, eye-opening result of what she learned.

Wealth Secrets of the One Percent: A Modern Manual to Getting Marvelously, Obscenely Rich

Spoiler alert: The game is rigged.