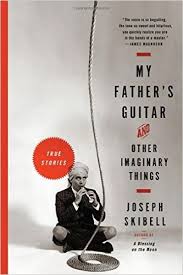 As if being a Texan Jew didn’t make his perspectives noteworthy enough, Joseph Skibell is a storyteller who views the world as a humorous archaeologist: curious, probing, and droll. With Skibell, a confrontation in a parking lot feels like an otherworldly adventure, which makes his collection of nonfiction essays a peek into a life — and lifestyle — worth living.

In My Father’s Guitar and Other Imaginary Things, Skibell doesn’t transport the reader to foreign lands; he reminds everyone — especially aspiring authors — that meaningful stories worth telling are all around us. His vivid childhood memories (flattening pennies on railroad tracks) and analogies (one woman’s vowels are “elongated, misshapen, still recognizable but taking up more space than necessary”) make tiny moments in his life, and our own, infinitely fuller.

Skibell penned 16 essays, short and long, for this collection; taken together they read like a diary of the unrequited love you wished would confide in you. What is he thinking? Would he like this, or that? What’s his family like? He readily admits that his “memory and imagination are like two converging rivers,” which bathe his writing in a dreaminess uncharacteristic of nonfiction.

The reader walks alongside Skibell, who has the ability to humanize his subjects with a gentle, forgiving perception. One of his best qualities is his willingness — particularly as a self-proclaimed adolescent maladroit — to recount even the most awkward situations, from his own aloof, failed attempts at first love to the dreaded “sex talk” with his daughter in “Sex Lives of Our Children.”

Skibell’s inelegance in some essays is in stark contrast to his confidence in others. Who else has no shame asking telemarketers for money? It’s for good reason in the essay “International Type of Guy”: Skibell is fund-raising to pay for his attendance at a conference on Esperanto, the “universal language promoting international brotherhood and world peace.”

The reader gains new empathy for the dying, painful art of telemarketing, particularly after one person — to Skibell’s shock and pity — offers to contribute to the cause. When he pitches the story to The New York Times, it seems less motivated by the byline prestige and more by earning the means to be among Esperantists. He eagerly parallels the rejection (on the grounds of being “too parochial for their readers”) to “further evidence of humanity’s decline.” Somehow, Skibell even humanizes Times editors.

He never exploits his eloquence, though. There’s an honesty in his writing that does not make his experiences seem fuller or enviable simply because he can articulate them. Instead, refreshingly, he invigorates the reader, inviting us to glimpse his world — the relatable highs and lows — and thus examine our own.

Skibell doesn’t play into the “falling in love” script as we’re programmed to believe it should feel, either, recounting how he questioned his wife Barbara’s sanity during their first dates, when she describes paranormal activity in her historic home. Their love reads more as gliding than falling — a slow, steady curiosity leading to partnership. She was one of three attractive Barbaras, after all, but there was something about her from the start, a fortuitous encounter recalled in “Snip Snip Snip.”

But the most profound relationship he examines — evidenced by the book’s title — is a fraught, lifelong struggle with his father. Even in the titular essay, Skibell describes being mortified by his father’s bargaining — a striking parallel to the self-proclamation “I come from a long line of rule breakers” in one of his final essays, “Everybody’s Lot.”

Young Skibell cowers as his father negotiates a guitar’s price tag; adult Skibell negotiates a justified parking ticket. (Though he didn’t seem to inherit his father’s “eruptive, unpredictable temper.”) Their bond, rooted in music, culminates during an ethereal episode toward the end of his father’s life. A crazy uncle and a crazy old lady remind us that our own families aren’t so unusual after all.

The reader will be grateful for what Skibell calls his “occupational hazard, or maybe it’s just a bad habit”: the tendency to listen politely to strangers’ stories. It’s easy to imagine him nodding politely with an ever-so-slight smirk on any given day, via Groucho Marx-esque lines that pepper the text: “You never know when you might hear something you can use in your work, although to be honest, I’ve never used any of it so far.”

Throughout, the book becomes more than a collection of essays; it’s a chronicle of experience and aging, the process within which a part of us — no matter how much we resist it — inevitably echoes our parents.

In My Father’s Guitar and Other Imaginary Things, Skibell makes ordinary experiences extraordinary. The book culminates in practical insight the place between optimism and pessimism, where reality lies: “If you don’t tell that story, it disappears, and even if you do tell it, it might just disappear anyway.”

Dara Bramson is a writer based in Kraków and Seattle.